When I started a few days ago with six other scientists for the “Yukon22” expedition, I didn’t know that “being surprised” would be the most striking emotion. Indeed, being surprised was actually quite surprising, especially since many impressions were in line with my expectations.

The moment our total flight hours switched to double digits, the Canadian peninsula revealed itself. People lucky enough to sit next to the window tried to push their phones through the plastic to snatch the best picture. The rest of us tried to glimpse past heads, hands, and cameras. What we saw is usually reserved for postcards and was worth the slightly stiff neck.

After we landed, the locals gave as a warm welcome: The human folk was as charming and friendly as the stereotypes were promising them to be. In addition, the local wildlife politely introduced itself. Geese, ducks, ravens, hawks, eagles, a lynx and later on Herschel Island lemmings, fairy shrimps, seals, cranes and pipers. Of the latter I was especially fond, because in order to distract from their ground-bound eggs, these little birds showed any passerby kindly but firmly where to go – and what to avoid. Traveling between lab and storage room meant therefore reliable company of these feathery friends. A habit that even after quite some trips would not get old. 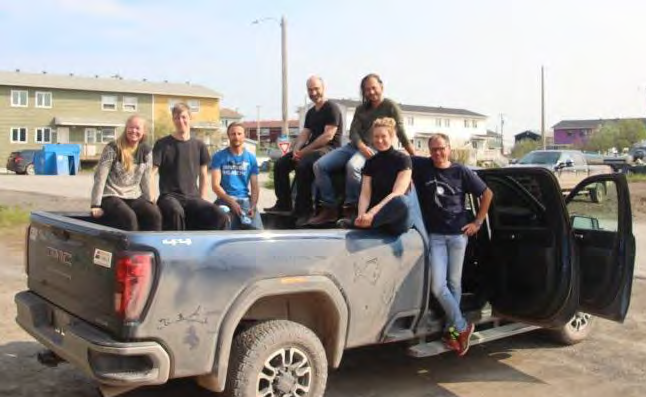 Each of these experiences, the landscape, the talks with the locals, and the colorful wildlife, would have warranted a visit to Canada and I was not surprised that this was the case. So why did the surprised feeling remain? Probably, because I thought to had known a lot about my short-time guest country and also because I thought to have known a lot about field expeditions. In both cases I was wrong.

I knew of Canada’s tourism, of people traveling to this place to experience the beautiful nature. I did not now about the Yukon Territory’s miniature forest: trees hardly larger than a grown person; or of the old driftwood that looked like giant antlers; or of the cloudberries with their white pedals and orange cloud-shaped fruits. I knew of the Canadian wildlife. The polar bear at the Yellowknife airport that hunts eternally a seal on a plastic piece of “ice” being a good example for that. However, I did not know about the less prominent animals, for example the different species of pipers or the lynx, fairy shrimp or lemmings – animals I didn’t know I wanted to see until I saw them. I knew that Canadians are considered extremely friendly. I didn’t know that this friendliness would include their willingness to share stories about their ancestors’ past.

And then there was science. The sole reason for our travel to Canada and the one part that should not have surprised me at all… or so I thought.

As a microbiologist I study the smallest lifeforms of our planet that despite their small size have a critical impact on our Earth. This allowed me to work across the world. In different labs, aboard swimming cities of all shapes and forms, across different oceans and seas. All this experience I brought with me when traveling to Herschel Island to analyze the impact of permafrost thawing on the marine bacterial community. For months I planned experiments, talked to colleagues, packed boxes, did health check-ups, and updated travel certificates which were useless the three years prior. As one of the newest members of this expedition, the experience of the others was a valuable source of information. Our expedition leaders took care of licenses, all the planning, and worked countless hours to get us all off the ground. The AWI logistic center shipped our boxes to Inuvik and provided us with warm cloth, boots and a sleeping back. In between the regular meetings that led up to the field trip, we all stayed in contact with each other, discussed the transport of our chemicals, and talked about potential problems and “must-haves” to bring. For quite a while, a small eternity stood between now and the beginning of the expedition. And then we were suddenly at the airport, ready for our travel into the wild.

On Herschel awaited us no running water, no central heating system, no supermarket next door. Once on the island we would need to rely on our planning and ingenuity and how many jobs are usually done by others becomes especially obvious when one has to fill them oneself. On Herschel there is no ship cook responsible for keeping everyone fed. No captain and crew that brings you right to the location of interest. Countless people must be credited when giving thanks to people that brought us to the island. Still, I was surprised to what extent the team had to be self-relying, problem-solving machines. Many general commodities of Yukon22were the teams’ job. Food we did not buy, prepare, portion and freeze was food we would not eat. Chemicals or other consumables we didn’t bring would not be borrowed by a friendly neighbourhood scientist. Everything that broke had to be fixed by us. When we wanted to sample something far away, we had to walk there and bring back the samples in our backpacks. 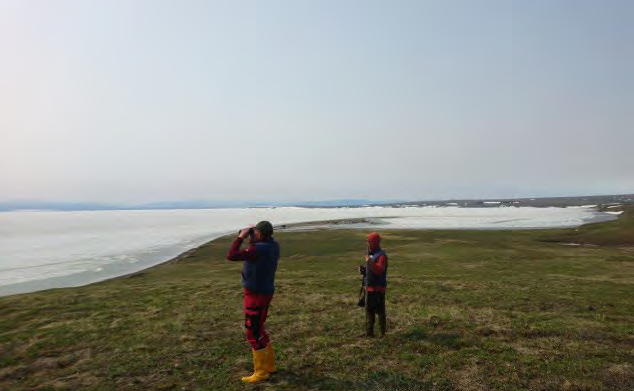 Day 1: we arrived and unpacked.

Day 2: we set up the lab and made plans to account for the “unforeseen surprises”: It was planned and expected that the cove would be ice free mid June. Now it is the beginning of July and we are still locked in an icy embrace.

Day 3: we started to build our boat, the zodiac, while at the same time the other half of the expedition team tried to find a land passage to “Slump D”, one of our prime sample sites. After three hours across wetlands, snow and sand we finally arrived… in front of an insurmountable stream that sat right between us and our goal. While “team slump” metaphorically broke down in tears, “team zodiac” realized that the motor did not survive the past winters on Herschel. Hence, the two teams had to come up with solutions: “Team slump” spend another three hours sampling at an alternative sampling site (fittingly dubbed the mosquito slump), whereas “team zodiac” took out the 700 page instruction manual to become motorboat engineers overnight.

At the end of day 4, we finally saw light at the end of our polar day: The first experiments were on their way and the first samples were safely stored as overseen by our piper guide. Team zodiac somehow managed to repair the motor and our precooked and reheated dinner tasted particularly amazing that bright sunny evening. Today is day 5 and “team zodiac” baptized the boat another year in the Arctic Ocean. “Team slump” was successful as well and arrived after a second scouting mission with fresh samples from slump D. After more than six hours of tedious hiking in feed-destroying yellow rubber boots a new trail between our camp and the sample site was discovered. Some of us will head to the lab soon and once the ice has left the cove, the main body of work will start. We are ready and exited for what is to come next.

Today is the fifth day of the Yukon22 expedition. For four nights two of us have faced the polar day in tents while the other five have slept in bunkbeds of the old police hut.

Each day of each expedition brings a unique set of challenges – and during Yukon22 the sun never sets. When starting on this adventure I knew that it would entail a great amount of work. What surprised me though, was what one can accomplish if there is no other option. When being stranded on an island you have no other chance but to find solutions within yourself and your team.

Roughly a week has past and I can say that it is exactly how I hoped it would be (despite not knowing that before): It is completely different from everything else I have experienced so far and an amazing opportunity. Not only for the scientific questions we’ll answer, but also for the challenges we’ll overcome in the process and the stories we can tell in the future.