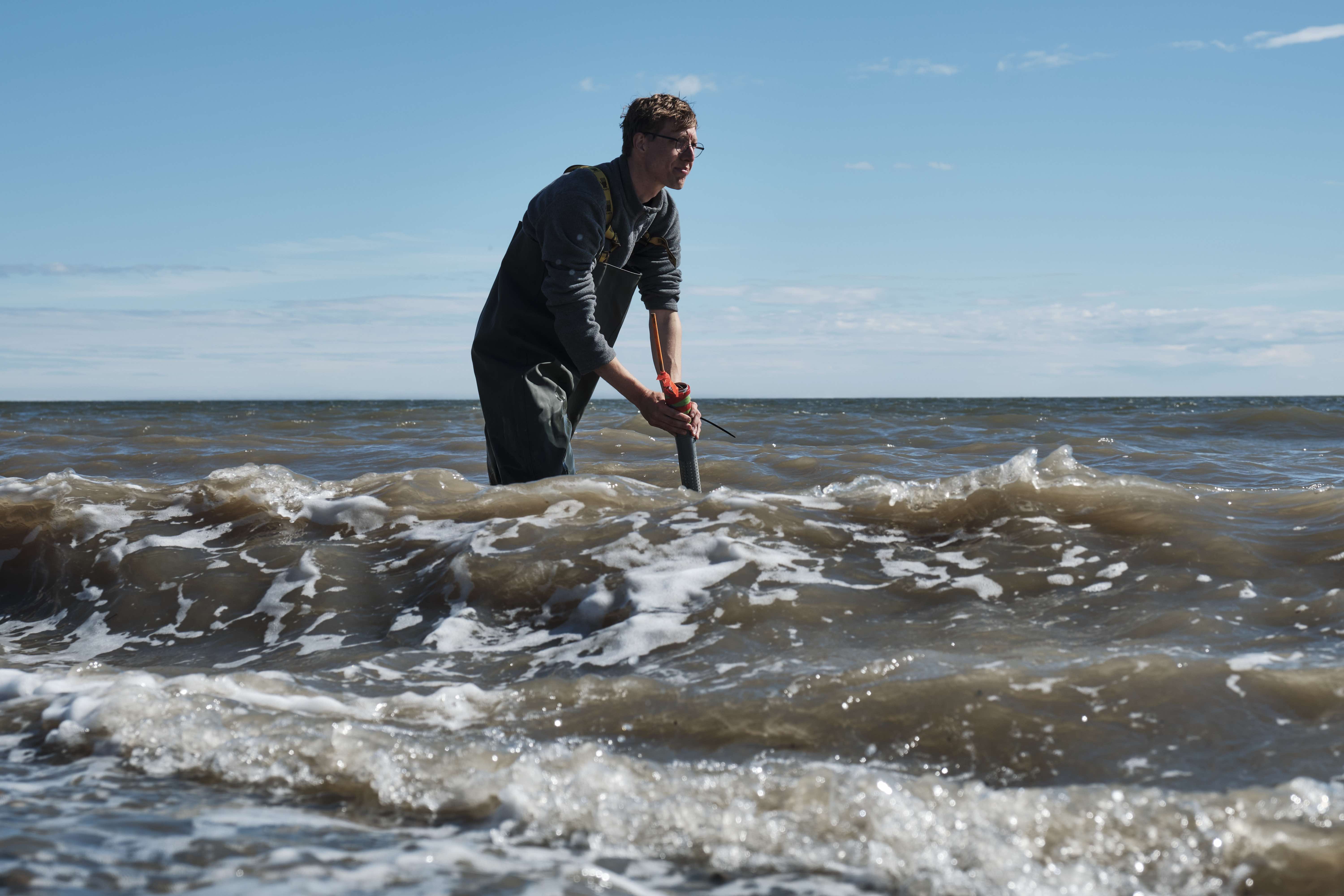 Devoured and retrieved from the ocean

Ice. While probably being one of the most vulnerable and worth protecting features in context of human induced climate warming, it sometimes can be a relentless enemy. Especially, if you are operating from a rubber boat and your delicate instruments hang on a thin rope connected to an air-filled cavity surrounded by only a few millimeters thick plastic.

So, after waiting for nearly ten days listening to all the amazing sounds of crushing and shoaling blocks of sea ice, a sound so familiar and yet so unimageable arouse. The shoaling of waves. Ten days of silence in an already silent island were broken as the first waves of the year reached the long driftwood stocked gravel beach.

This rang the bell to finally start doing marine research. With a short preparation (after a month-long pre-preparation) we were finally able –with only little stomach pains – to set sail and deploy a mooring line consisting of modern current and wave meters. The aim of this study is to quantify the transport dynamics around eroding permafrost coastlines and get more in-depth process understanding around the transport and settling of potential carbon-rich material entering the nearshore zone of the coast.

After celebration and joy, disillusionment followed shortly after, with mounts and mounts of sea ice appearing again on the horizon. The next day a weird feeling became the sad truth as Pia and Justus took a walk with the binoculars to confirm the hunch. One of the small red buoys, bouncing with the waves and marking the instrument at the sea was missing. Dozen times of looking brought no better news. We lost the instrument. Not only the valuable sensor itself, but also the data it recorded and stored. Irretrievable on the ocean floor, or so we thought.

After an initial depressing time of realizing that the instrument is lost and knowing that other instruments may face the same fate, came the phase of hope. Multiple steel rebars were quickly formed into an anchor that could have been an original prop from the pirates of the Caribbean movies; all rusty and dangerous looking with only a single purpose, catching the hidden ropes laying at the sea. With the optimism that only Maarten could possess, he and Justus dragged the iron-forged beast over and over through the muddy sediment. With no success. Knowing that the sea ice could have carried the instruments miles away all hope was now gone. Forever.

The next part contains a lot of hearsay, but must not be forgotten.

Once upon a time an ecologist walks the tundra having more than a hundred plant species in mind and getting ready to set vegetation plots, soil temperature or any other fabulous work to do. Taking a breath and watching the sea looking for a blowing beluga whale or any other fairy-tale character, she notices a red dot appearing at the sea. Hyped by the discovery, knowing the struggle of Justus and the lost instrument, she sprints to the base camp and alarms the two friendly giants (park rangers) Jeremy and Keegan, who jump on their boat rushing to the suspected place. Pulling the rope attached to the platform from the sea, a scene last time witnessed by King Arthurs disciples, that should bring back the lost sensor.

The word of recovery was spread by Hugues through a WhatsApp chat message based on a poor connected Satphone message by Isla, reaching the travellers at the airport on their way home.
While only very few people, most likely only the glorious Bill, saw the retrieved instrument, Potsdam is the place of hope where Justus eagerly awaits the Teledyne Sentinel Workhorse 600 kHz.

Thank you so much to everyone involved! 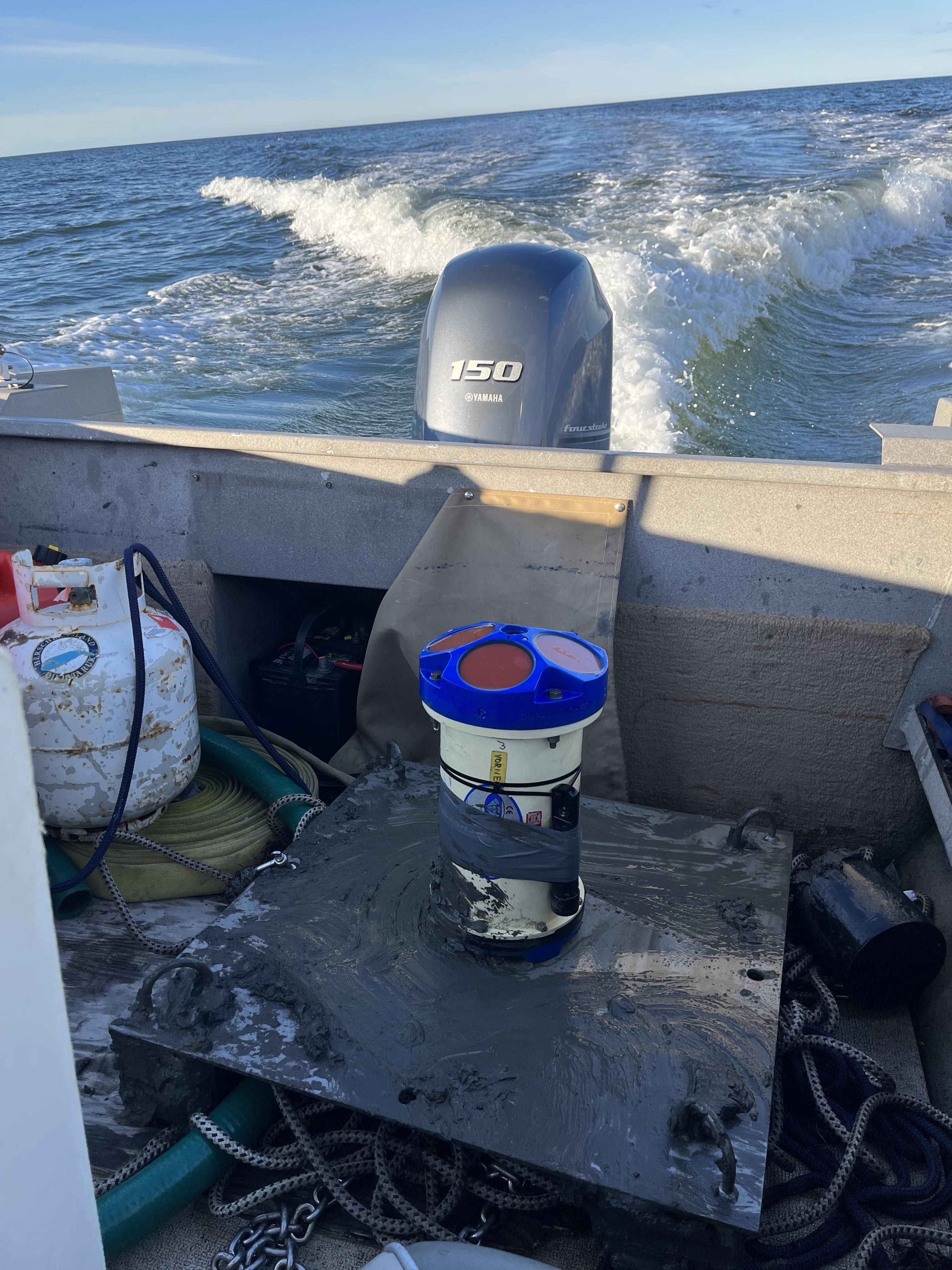