Bubbling under the Arctic Seabed 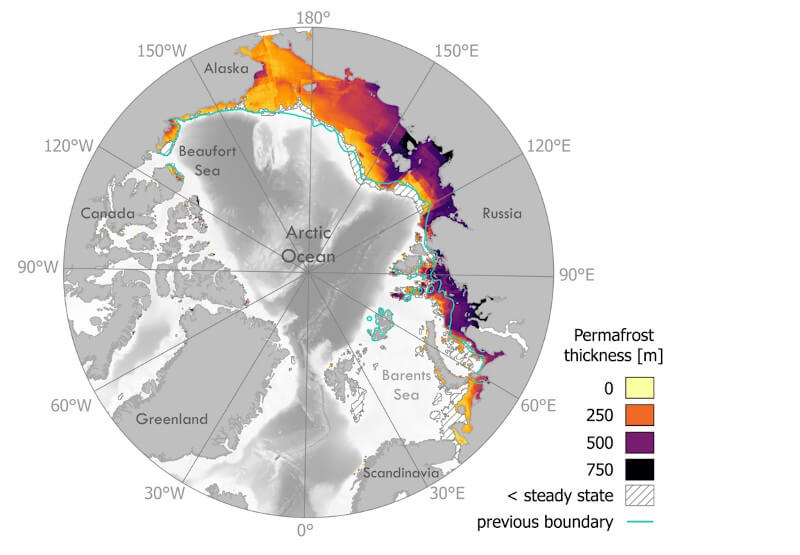 The fate of permafrost - soil that is frozen for 2 or more years - is of huge importance for the global climate because of the large amounts of organic carbon stored in it, which can be released into the atmosphere as these soils start to thaw.

Scientists have now, for the first time ever, modelled the distribution of submarine permafrost underneath the entire Arctic seabed. Published in the Journal of Geophysical Research: Oceans in the latest issue (April 2019), their findings reveal that submarine permafrost is more widely distributed than previously thought, and is almost all getting thinner.

These findings are significant, because knowing how much submarine permafrost exists is a crucial first step in predicting how much methane and carbon dioxide might be released into the atmosphere from underneath the Arctic seabed.

“As sea ice melts and the temperature of the Arctic water column increases, some of this heat is being transferred to the seabed, accelerating the thaw of submarine permafrost. This raises the possibility of releasing methane, a powerful greenhouse gas. It’s crucial that we get a better understanding of where submarine permafrost is located and how vulnerable it is to this warming”, noted Paul Overduin from the Alfred Wegener Institute (AWI) and lead author of the study. 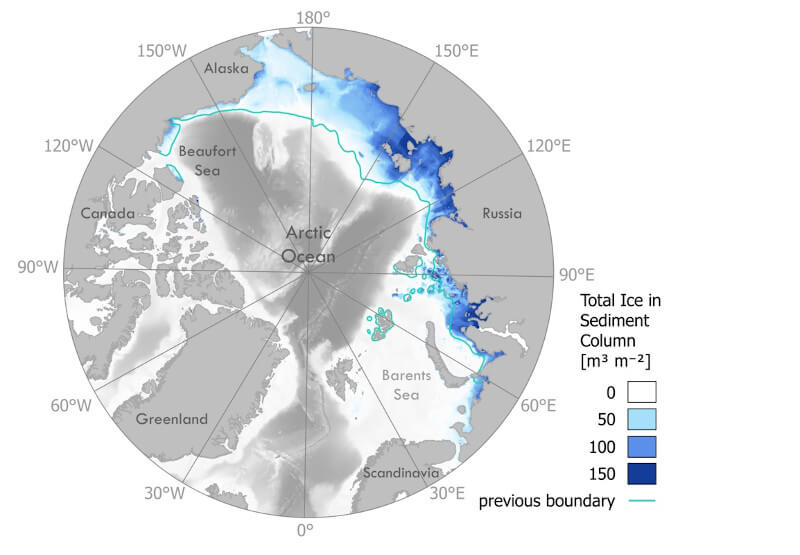 Since the last Ice Age, the world’s oceans have risen by about 120 m, covering a lot of land that was deeply frozen. Most marine permafrost is thought to be such relict terrestrial permafrost, that now finds itself under the Arctic ocean. Scientists have so far predicted where marine permafrost exists by reconstructing global sea levels and modelling the underwater topography (bathymetry) of the oceans. Observational data from ships has also provided some data, but it is limited to just a few areas in the Arctic.

Paul and his colleagues tweaked this approach by adding a heat flow model. First they modelled how Arctic sea levels rose and fell over hundreds of thousands of years. Where low sea levels left the land exposed to a cold climate, the model shows that permafrost developed. High sea levels, such as those we have today, flooded the land and created submarine permafrost. To see how submarine permafrost evolved over time, they then used a simple mathematical model to track the heat flow into the ground from the ocean, to understand how quickly permafrost thaws once it is covered by seawater.

The team also compared the model to some of the few seismic surveys and drilled cores available, in the Kara and Beaufort Seas, and found a good match. According to their model, permafrost exists under 2.5 million square kilometers of the Arctic seabed (roughly half the size of the European Union), larger than previous estimates. They found that permafrost beneath the ocean is warming and the ice in it is thawing. Most surprising to the team was that 97% of submarine permafrost is thinning, implying that submarine permafrost will almost certainly disappear if the Arctic seas continue to warm. Over 80% of submarine permafrost is located in the Siberian Arctic Seas, which is relatively shallow with an average depth of 100 metres.

Their work is an important step answering some larger questions about how much the Arctic is contributing to global greenhouse gas emissions. “The big question on everyone’s mind is how this warming of marine permafrost and thinning will impact on methane emissions. Our work provides a baseline to start modelling emissions against various future warming scenarios,” concludes (Sebastian Westermann, University of Oslo), one of the co-authors of the study.