Kickoff to the second Nunataryuk/WP4 expedition in the Mackenzie Delta

This expedition is being conducted as one of the four expeditions focused on exploring the seasonality of organic matter by examining optical and biogeochemical variables within the delta covering the period from April to the beginning of September 2019. The main channels including both western and eastern channels of the Mackenzie delta are targeted as the study areas.
Following the climatology of satellite images, potential and logistical difficulty of conducting field observations during the month of June using a boat, particularly in the western channel, was expected due to sea ice break-up and spring freshet. To overcome these issues, intensive and extensive observations using a helicopter were planned and well prepared. This included a number of steps, for example, taking part in an aircraft ditching course, installing a winch, cables, and instruments on the helicopter, plus conducting a sufficient number of ground and flight tests. Finally, the helicopter observations in the Mackenzie delta were successfully achieved from 17 to 21 June 2019.

Hold your breath: Helicopter underwater egress training / Aircraft ditching course in Halifax. Like other operations, there are always risks when conducting field observations using a helicopter in an extreme environment such as the Arctic. We took part in an aircraft ditching course (rotary wing) on 6 May 2019 in Halifax. The course consisted of lectures in the morning and practice in the afternoon. The lectures validated the essential importance of this type of preparation, the possible scenarios during flights in extreme environments, the preparation to ditching and “cold shock”, as well as the steps towards escaping from the helicopter turning over in water, etc. In the afternoon, we practiced to escape from a container (a mimic of the helicopter) turning over in a pool several times to get used to it. This practice was repeated but all of the team members had to escape from different types of doors for practical reasons. At the end, every team member was awarded a certificate. 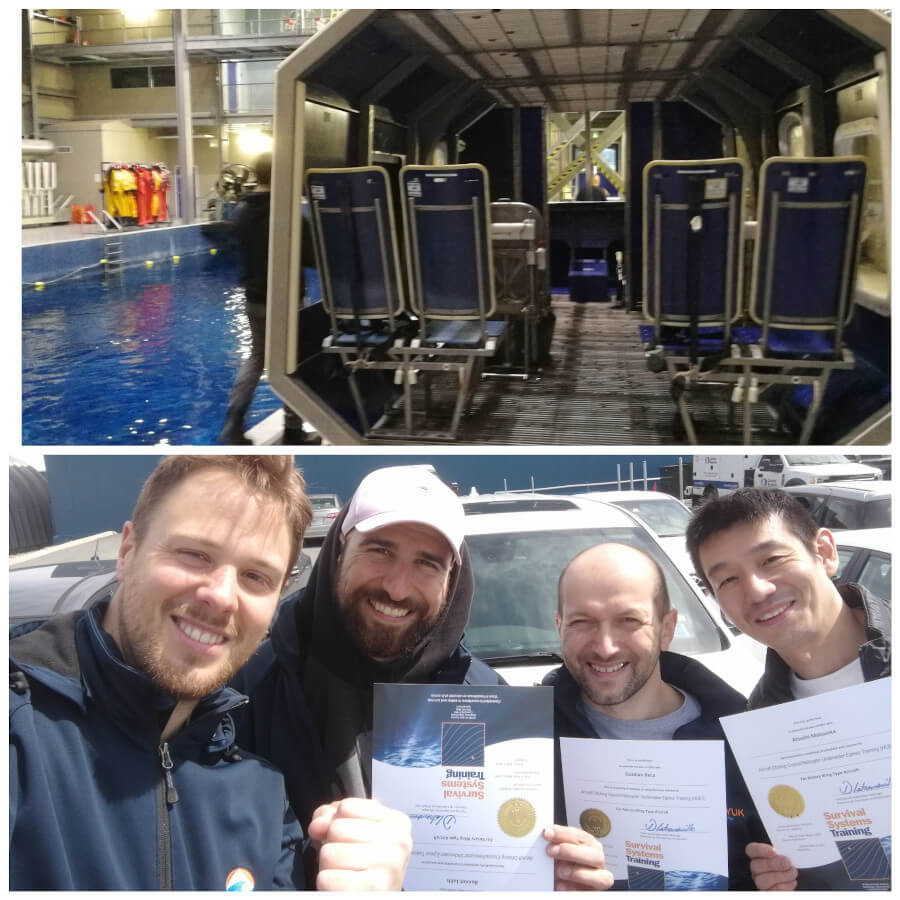 Getting ready: Installing the gear in the helicopter – Yellowknife part 1 and part 2. So what? We were trained to fly safely above the sea, we had access to a helicopter, and it was a first time for us to actually deploy scientific sensors from a hovering helicopter in the Arctic region. Mid May, we travelled with a mind full of question marks to Yellowknife (Northwest Territories), hometown of the Great Slave Helicopters (GSH) company who owns many helicopters, among which the BK-117 (Bölkow - Kawasaki), fitted with an outside boom-mounted hoist for search & rescue operations. 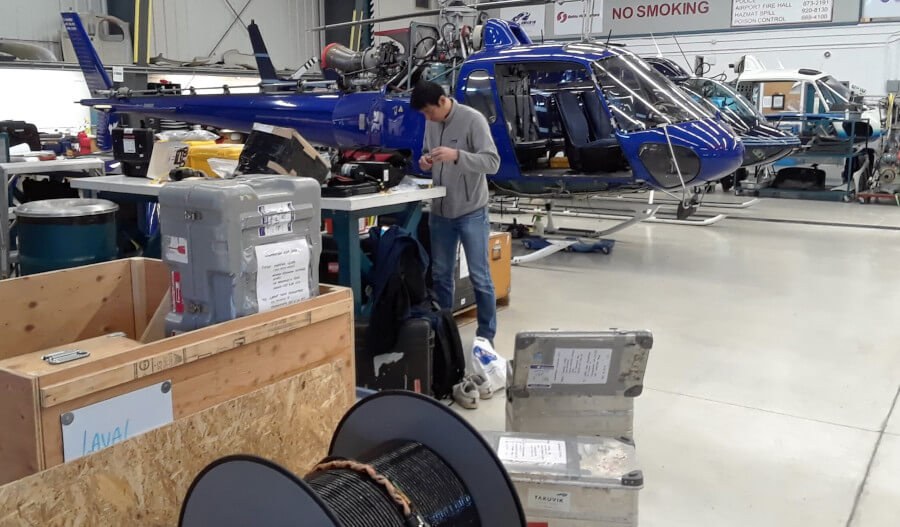 We naively thought that 2 days would be enough to bring our scientific gear and install them in the helicopter cabin and that the job would be done… Nope! You usually find you haven’t much space on ships? Well, this was definitely another game! And even with good weather conditions, EVERYTHING had to be securely fastened with lanyards. 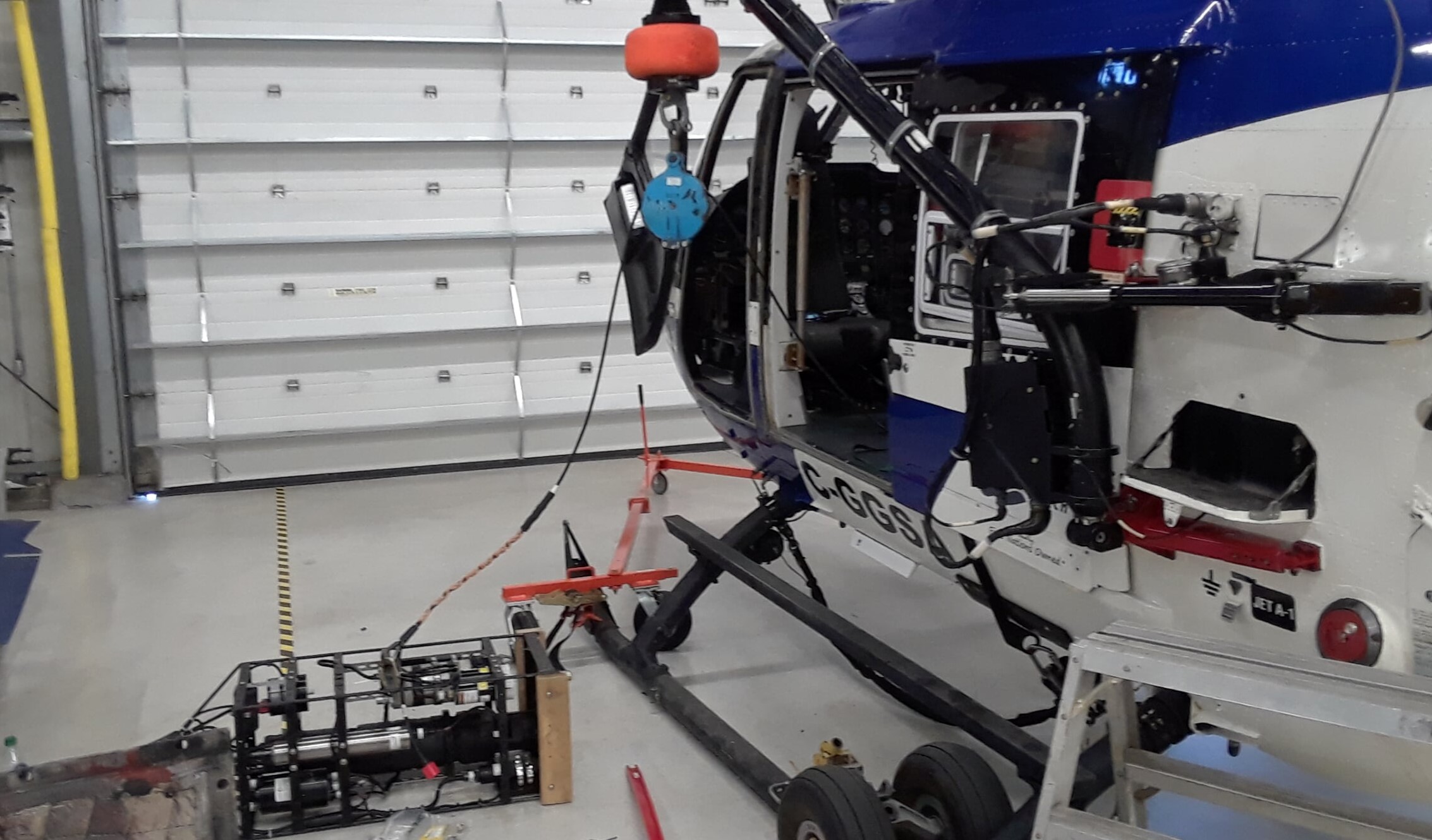 You wanted to move something forward? First you had to attach a front lanyard before disconnecting the aft one, advise the pilot on what you intended to do and then move slowly your stuff forward. This was a safety protocol to prevent in the case of sudden and abrupt movements of the helicopter, even small and light flying objects like a notepad from hitting you in the face and cause bad injuries. Even the lanyard itself, when disconnected from a piece of equipment, had to be fastened to an anchor point. We literally cleaned out the Yellowknife climbing store of all the carabiners and lanyards they had in stock!

Long story short. As the dimensions of the helicopter cabin were much smaller than those of a boat (even a small boat), many things had to be adapted and modified. Among many GSH staff who helped, all our operations couldn’t have been made possible without the help of Joseph (“Joe”) Gourd. We’d like to highlight here all his commitment and the hard work he’s achieved to make our operations possible!

In the end, it took us two 4-days trips to Yellowknife (in addition to Joe’s amazing work in between) to get everything installed, and to train, train, and train again. We first trained with the helicopter on the ground, then we trained again with the helicopter on the ground, but dressed with our dry / immersion suits, as well as our harnesses, life vests, headsets (we even had radio noise to mimic the ambient flight noise!). First time, you feel like you can barely move a finger because of all this wrapping, but you get used to it. 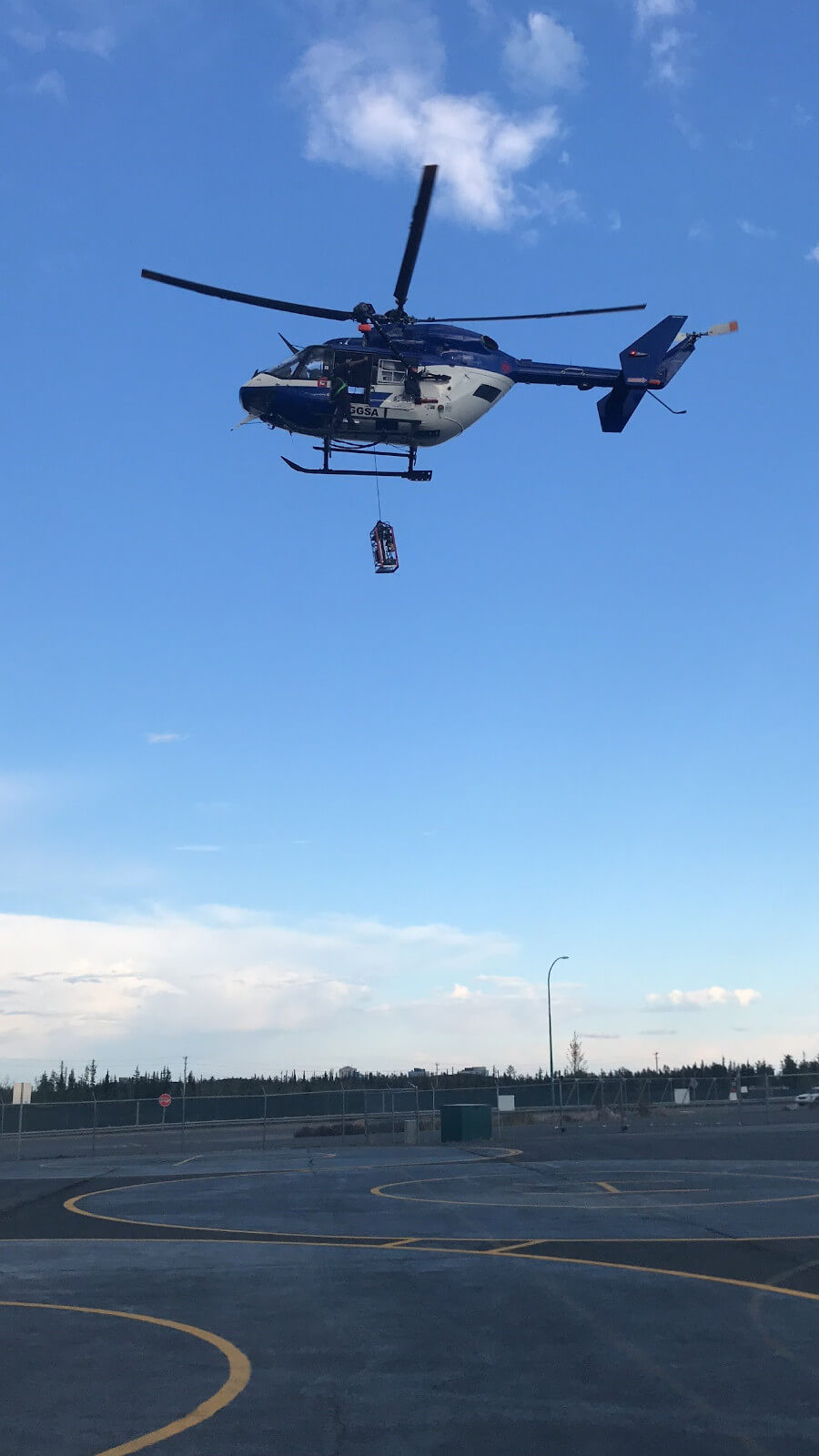 When we felt confident enough, we finally tried to take off and tried all the deployments above the ground in the GSH yard. And all the training we had done on the ground paid off, as it didn’t take long before we had our routine in mind and were looking forward to the real work up North! 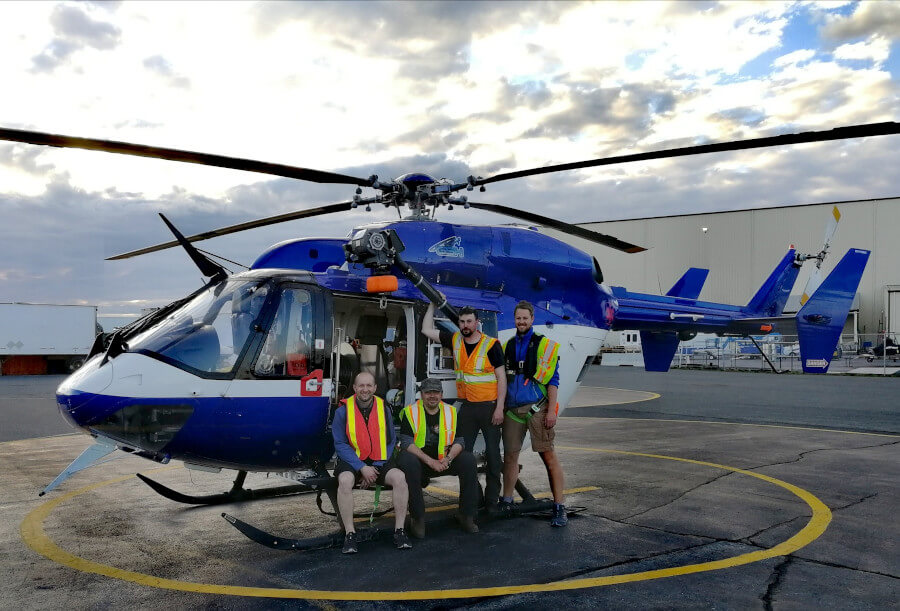