This change had been coordinated with the rangers’ crew change flight. The park rangers Ricky and Shane left and Samuel and Edward came in.

The first part of the mainland coring campaign is completed, and Andreas left with eight subsampled sediment cores. These samples will be used to study the microbial decomposition of organics in the permafrost and the upper soil layer, which is usually thawed in the summer. 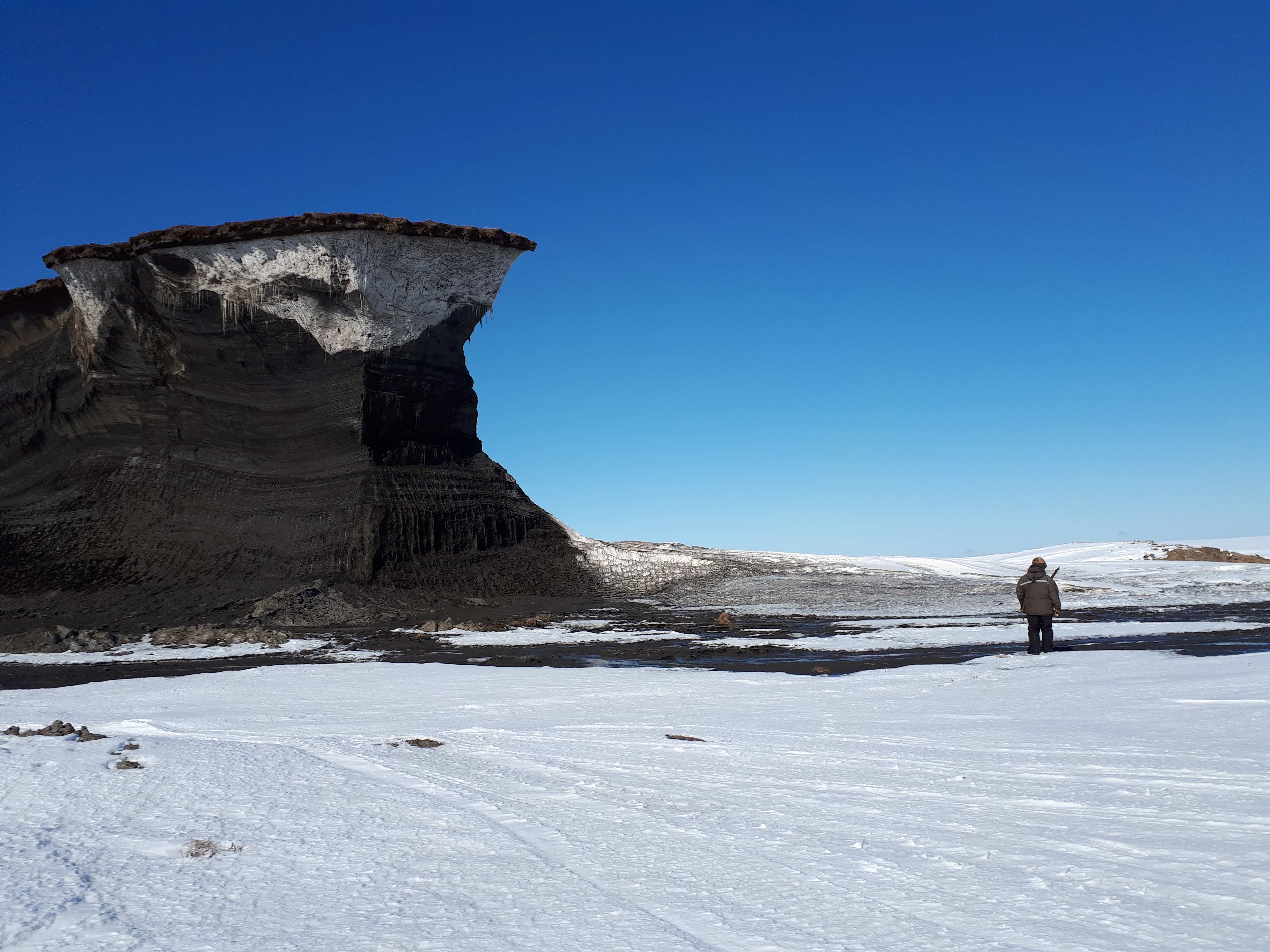 During this past week, Jan, George, Peter and Juliane have travelled intensively across the coastal plain between Herschel Island and Kay Point. They retrieved sediment cores from a total of 24 drained lake basins in order to reconstruct their past development, vegetation and carbon dynamics. George has retrieved a total of 12 cores from the four main sediment units on the coastal plain to investigate the leaching potential of carbon from permafrost deposits. Another eight cores as well as parts of Andreas’ cores will be analysed for heavy metals (Lisbon) and other contaminants (Venice). We came up to a total of 52 SIPRE cores.

Some of the field days were a bit of a challenge in terms of work load and travelling time. The farthest coring location was a good 44 km from camp at the mouth of the Babbage River at Kay Point. Since we had four additional coring locations in that region and “picked up” several sea floor sediment cores on the way home, this was a very long day. Then again, all coring days were long anyway. The mainland coring program is now completed. We can safely say we saw it all and learned a lot about the coastal plain.

The second big task of the last week was the sea ice program. Hugues, George, Jan, Peter and Juliane took sea ice cores, short sea floor sediment cores, and water samples from different depths. We repeated this procedure at a total of 12 locations along two transects. One transect followed the gradient of riverine vs. marine influence from the mouth of the Babbage River towards Herschel Island. The second transect led us from the mainland coast near Ptarmigan Bay and seawards. We successfully completed this task yesterday. The samples will be used to analyse methane concentrations and carbon dynamics, sea ice thickness, suspended particles in the water and several other parameters. 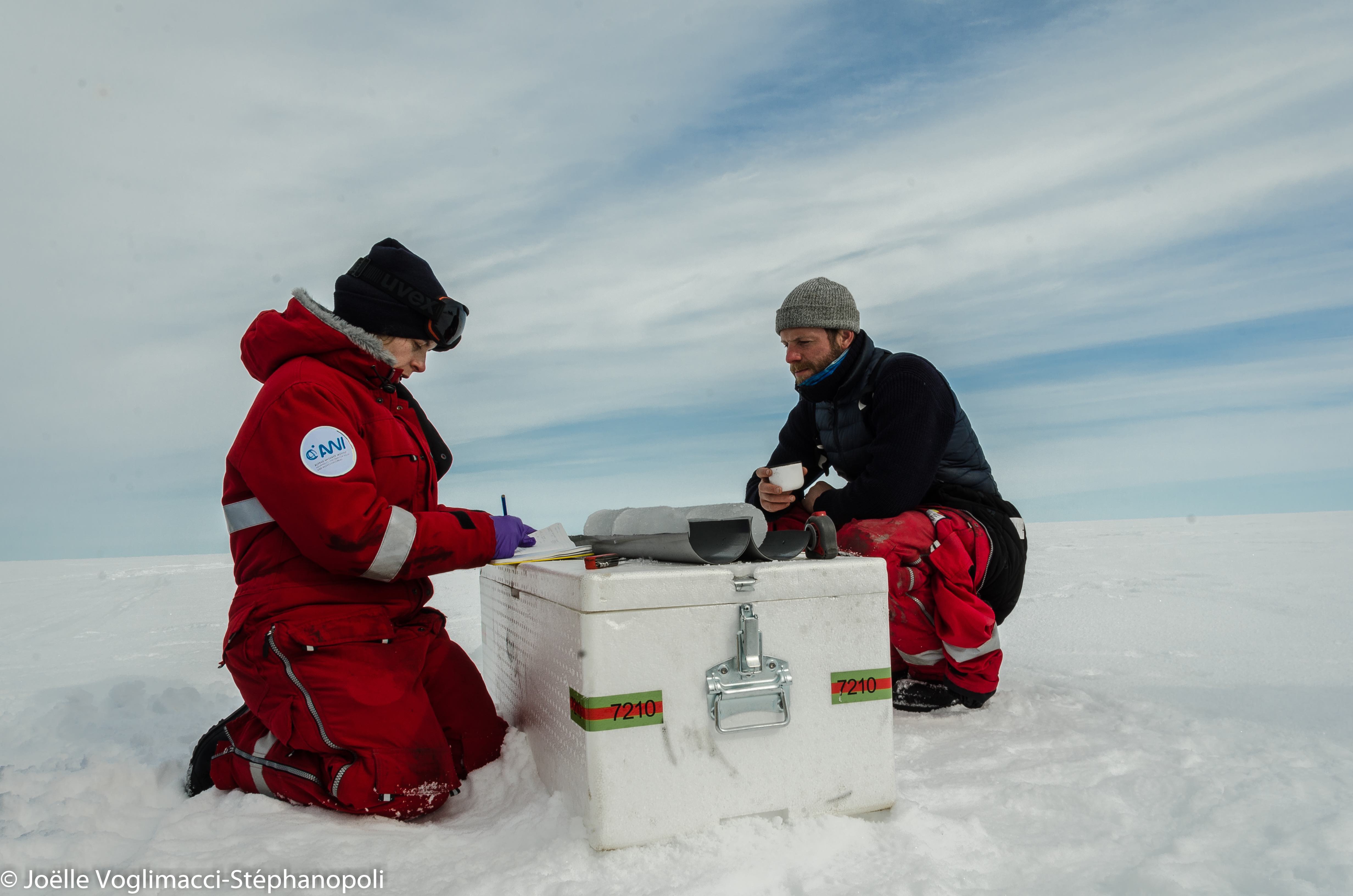 The snow campaign is running smoothly as well. Until now, 45 sites have been investigated. Ten of these were revisited for each TerraSAR-X overflight. Joëlle and Vincent, our team snow, expect to compile more than 60 snow pits until the end of the expedition. They are measuring snow depths and identifying snow layers in snow pits. For each layer, Joëlle and Vincent measure the surface structure of the snow, its density, thermal conductivity and temperature. The dataset will feed into Joëlle’s master’s thesis. She will validate the evolution of the snow cover and its distribution as observed on TerraSAR-X images with in-situ data and evaluate the spatial distribution in Ice Creek watershed. On Tuesday (April 30th), team snow had the rangers visit their field sites. Samuel and Edward McLeod were very interested in the snow characterization methodology, and particularly in the interactions between snow, vegetation, permafrost and wildlife. It was a really interesting exchange between Joëlle’s and Vincent’s theoretical knowledge and long-term field observations from Edward and Samuel. 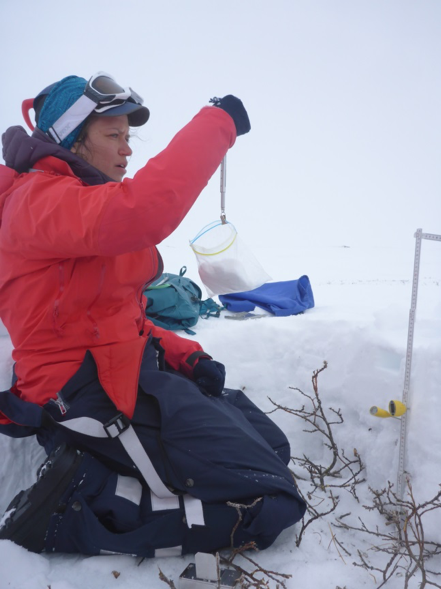 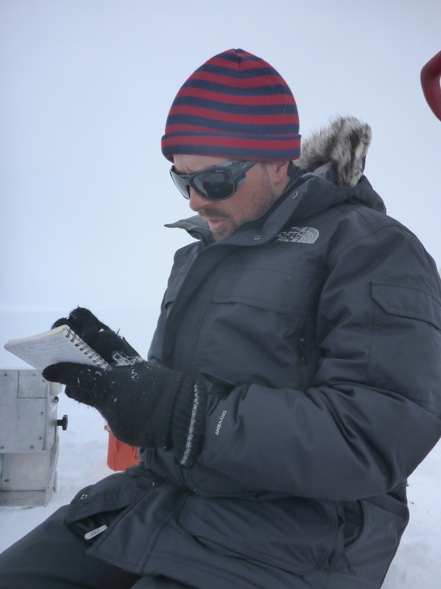 During the next days, we will start sorting and packing our samples and cores and preping our departure. Team snow will continue sampling snow pits with the help of Hugues and Juliane and George, Jan and Peter will travel to the mainland again to install a sensor.

By now, everyone is tired but happy. We have achieved a lot and our thoughts are wandering home more often.

All the best from the windy, cold and sunny island,
George, Jan, Hugues, Vincent, Peter, Joëlle and Juliane