Open water north of Herschel Island is creating persistent fog and low clouds around the island. As there are no trees around, this means white ground, white skies and white in-between with occasional snow flurries.

No planes or helicopters could land safely in such conditions. Accordingly, we could not fly and remained on stand-by, while Inuvik itself experienced blue skies and day temperatures as high as 0°C. So on Monday, we decided to use our spare time to visit Tuktoyaktuk in the northern part of the Mackenzie Delta. The region is known for its more than 1000 pingos, among them the second-tallest pingo in the world, which rises about 49 meters above the otherwise flat tundra. The feeling of standing on the edge of the world intensified as we were standing on the frozen and windbeaten Arctic Ocean looking north. 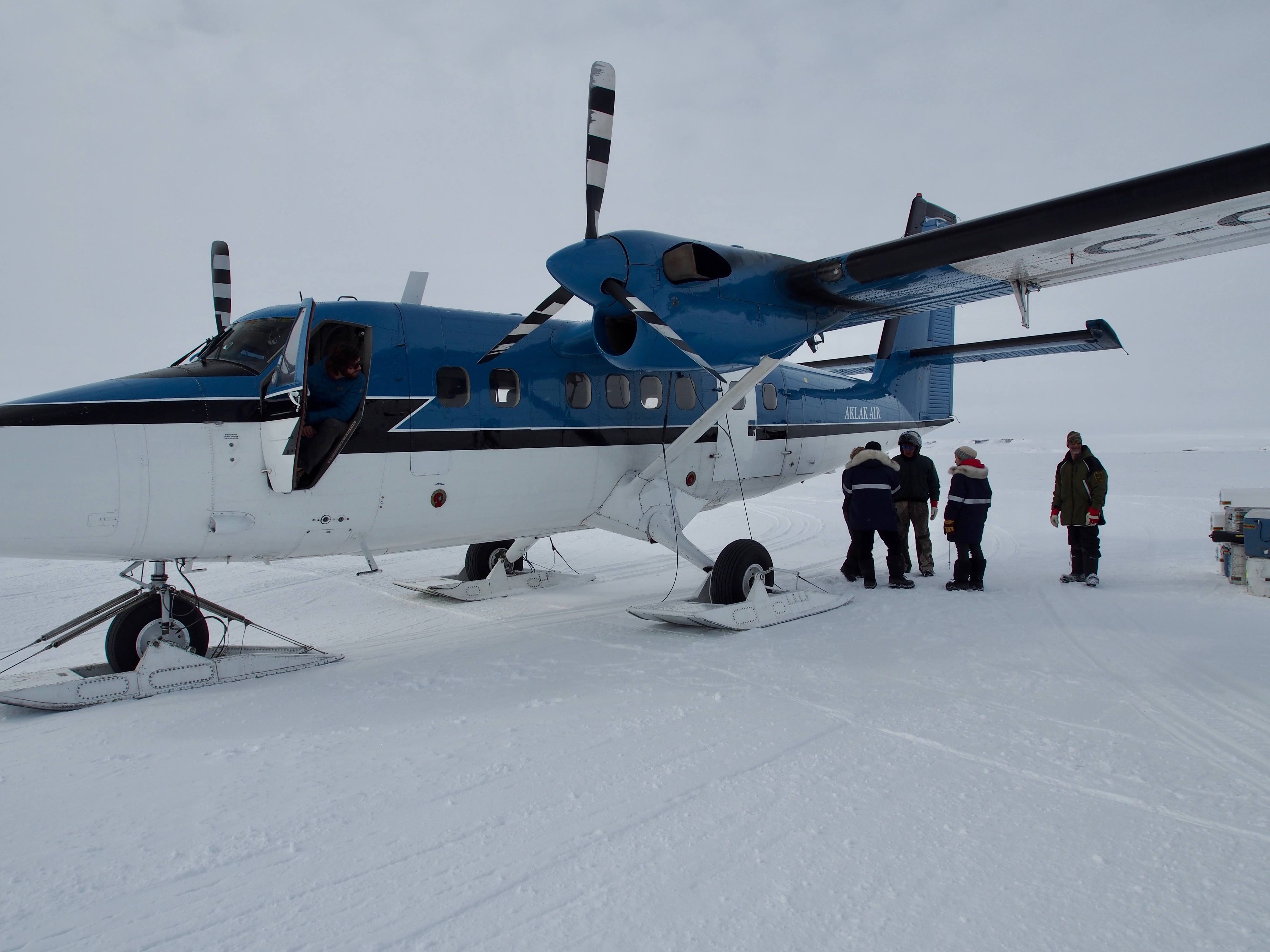 Then the waiting game started for real. We stayed ready for departure until on Wednesday afternoon a short window of favourable weather conditions enabled the first team to fly. George, Joëlle, Andreas, Louis and Vincent arrived on the island with about half of our gear and food supplies. They started work right away and Joëlle and Vincent even managed to use the overflight of the German satellite TerraSAR-X the same night. The satellite produces radar images of Earth’s surface and had been specifically switched to a different polarisation for us. The radar data can be used to measure snow depths and to approximate snow pack properties. Joëlle and Vincent are comparing these data to observations they are making on the ground. George, Andreas and Louis tested our coring equipment and got the first soil and sediment cores, from the active layer, the transition zone and the deep permafost (down to 1.8 m). These cores allow to address a range of questions from paleoclimatic conditions during the holocene to microbial community composition. 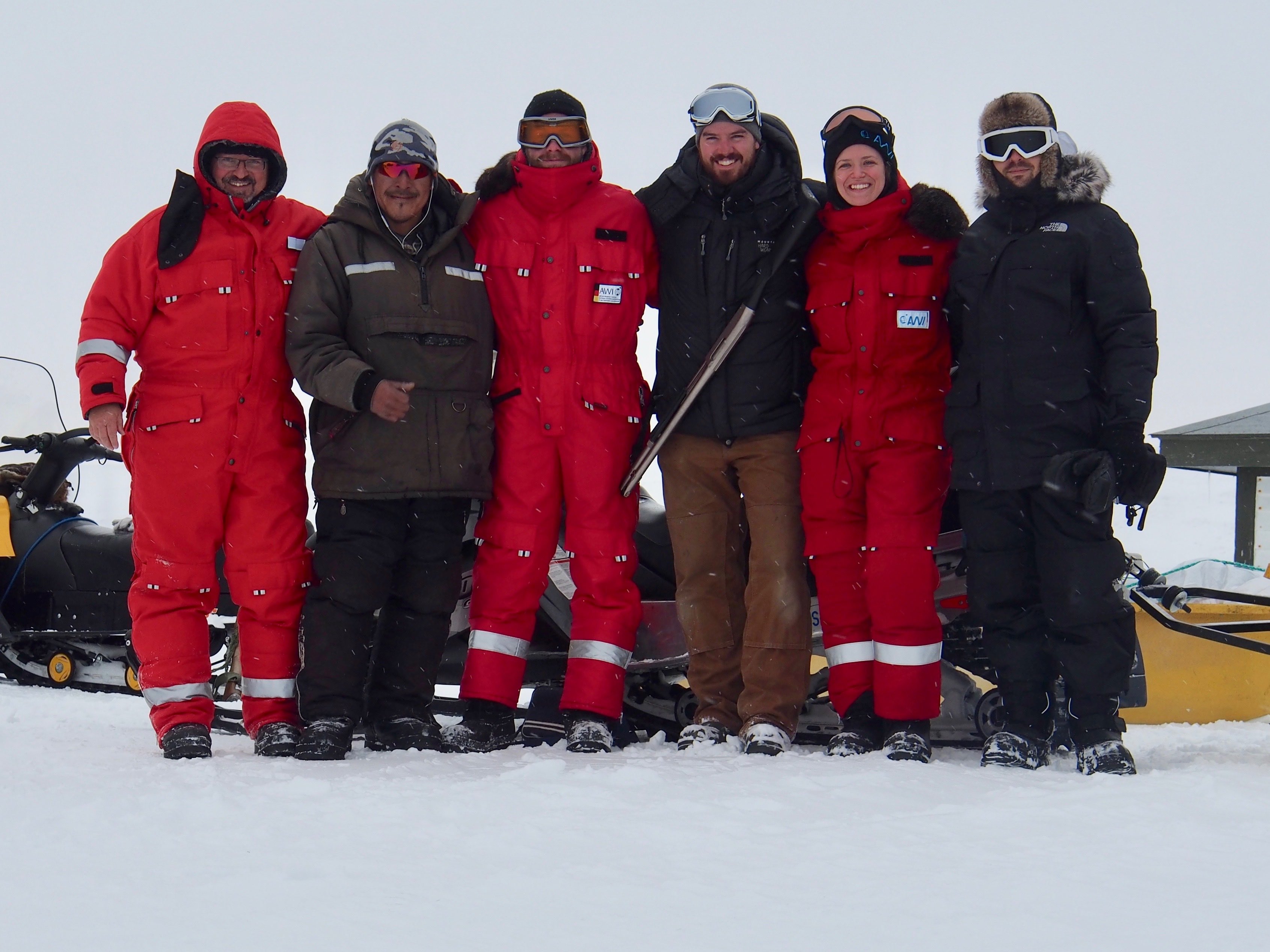 Meanwhile in Inuvik, Jan and Juliane continued to closely follow weather updates and conferred with pilots, managers and technicians of both airplane and helicopter operators. On Saturday, Jan and Juliane finally also made it to the island. Now we are all in full field mode. Daylight already lasts far into the night up here and we are using its full potential at day temperatures around -11°C. During the first days, gravelly ground made our coring attempts difficult, but by now we are working efficiently and quickly in our five-person coring team. We already cored 33 sediment cores at 22 locations for different purposes. During the last three days, we retrieved between 10 and 13 cores per day. We covered lots of ground on the coastal plain and reached places that would have only been accessible by helicopter in summer. Our work is made a lot easier by the presence of Peter Archie from the Mackenzie Delta community of Aklavik. The coastal plain is actually not a plain surface, and numerous rivers and creeks dissect the thick morainic deposits. Crossing them on snow mobiles can be tricky, but Peter always finds the safest and quickest routes. We are also working in thick fog some of the time, and Peter keeps an eye out for wildlife while we are concentrating on coring, describing and packing sediment cores, often completely unaware of our surroundings. We feel safe and the team has developed an amazing working rhythm and speed. We have seen some wildlife anyway: a seal, three muskox, a lone caribou, several wolverines and a fox. Muskrat dens and polar bear tracks show us that there are more animals around. 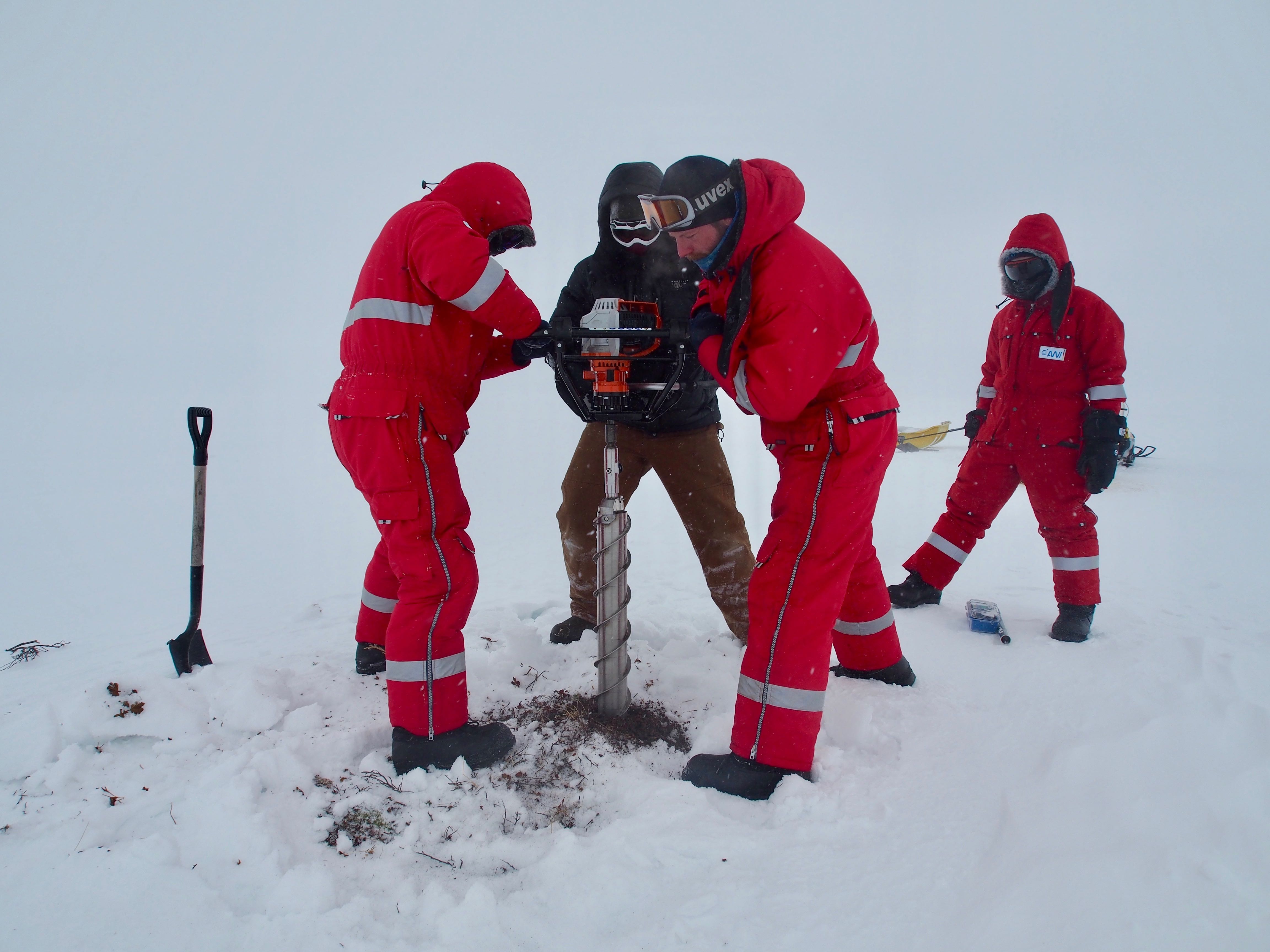 This Thursday, Andreas and Louis-Philippe will leave the island on the park rangers‘ crew change flight, and Hugues will come in. Our main tasks for the next two weeks will be centered around snow pit work and mainland coring in drained lake basins, and we will start the sea ice programme. 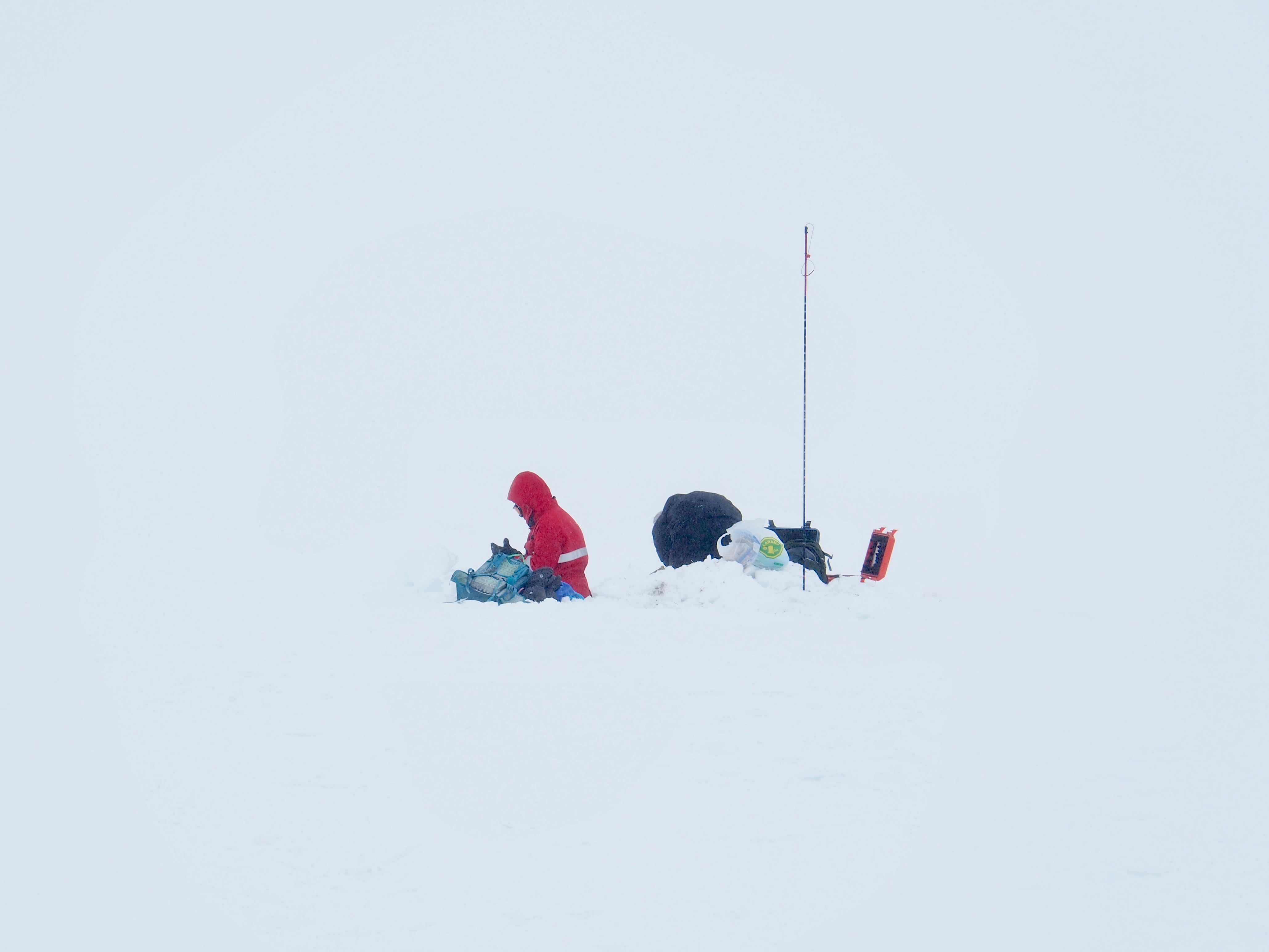 We are all well and happy with our group and with the progress of our work in this beautiful winter wonderland.
Jan, George, Joëlle, Vincent, Louis-Philippe, Andreas, Peter und Juliane