But beyond that, the expedition boasted an unbelievable streak of sunny days and a hard-working and seasoned team. 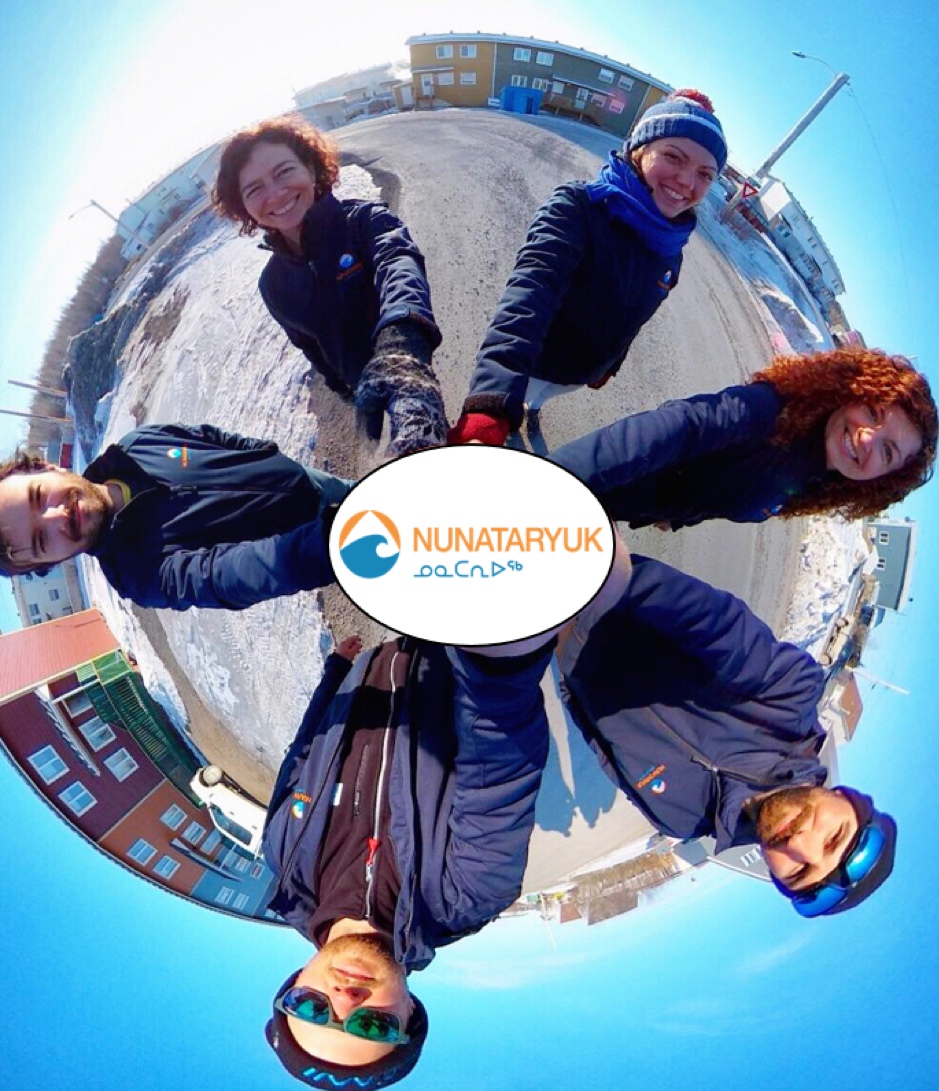 Add to the mix the remarkable partnerships developed with members of the local communities and conditions were reunited for the science plan to come to fruition. The expedition did not come without its challenges however. Cold temperatures put both the team members and the instruments to the test as they struggled to function in the freezing waters of the Mackenzie Delta. Hands and toes nearly froze. Optical sensors really froze. The expedition’s torque was carried by three intertwined cogwheels: a field team, community members, and a lab team. Together, the three components successfully accomplished the sampling and analysis of waters from the Western and Eastern sectors of the Mackenzie Delta.

The Western sector of the Mackenzie Delta

After its initial practice round, the team rapidly switched gears. The definitive sampling would begin in the West (Shallow Bay) via helicopter on Easter Monday. The first challenge? Fitting instruments and material in the cheeks and baskets of a flying squirrel (AStar). Rounds of loading and unloading. Rounds of unpacking and repacking. Like a boxing match. Challenge met by Bennet Juhls, Laurent Oziel, Miles Dillon (Inuvik HTC member) and Connor Gould (GSH helicopter pilot). 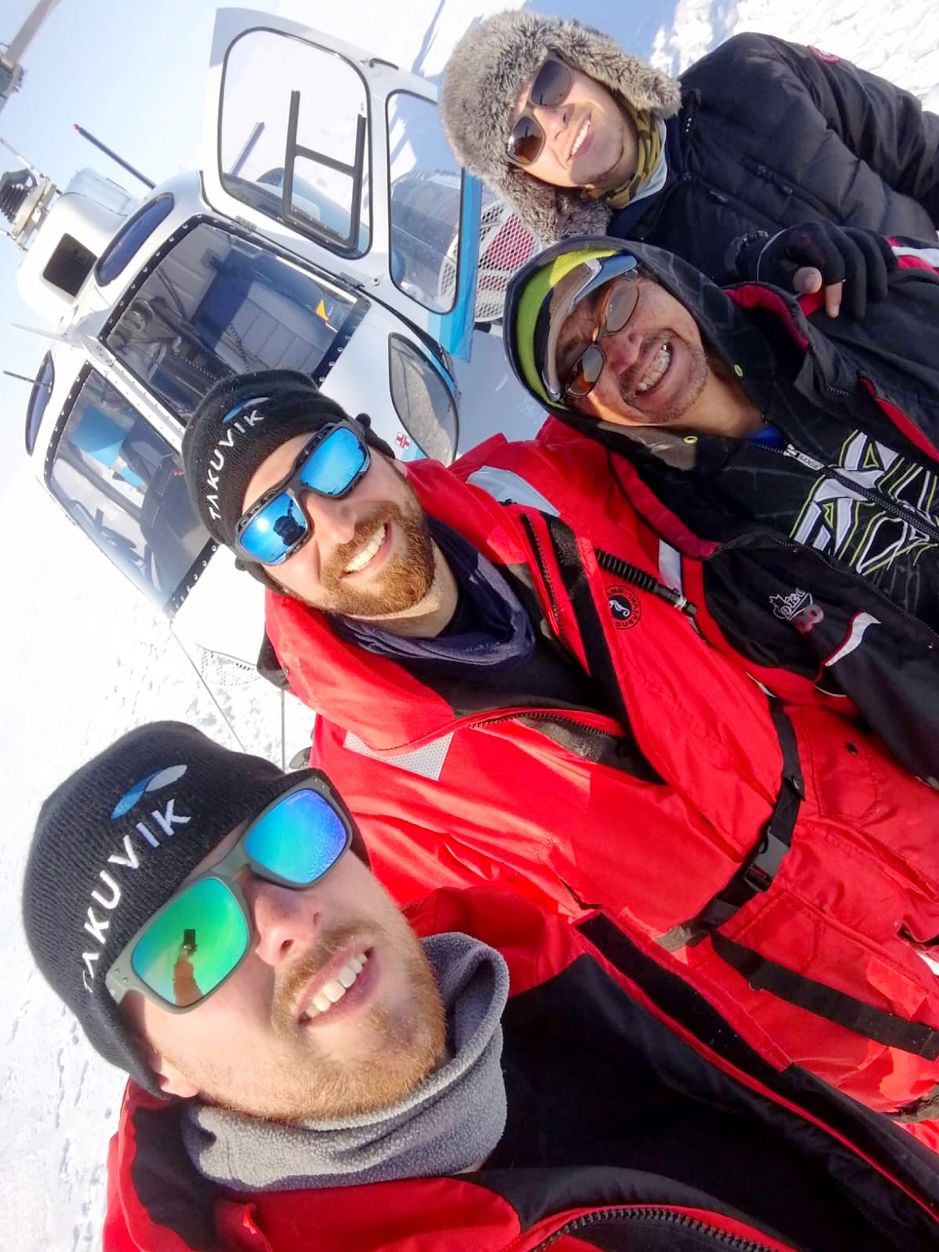 But there would be one way and one way only for all the gear to fit. And when the pressure of a rapidly moving wall of dark clouds and snow forced the team to flee a station one day, the tetris game was hastily carried out with muscle memory. The team had planned on three flight days. Of those three flight days, three turned out to be favourable for flying. Chances of that happening under the frequently adverse weather conditions of the coastal area of the Mackenzie Delta, were, according to expert pilot Connor Gould: slim to nil. 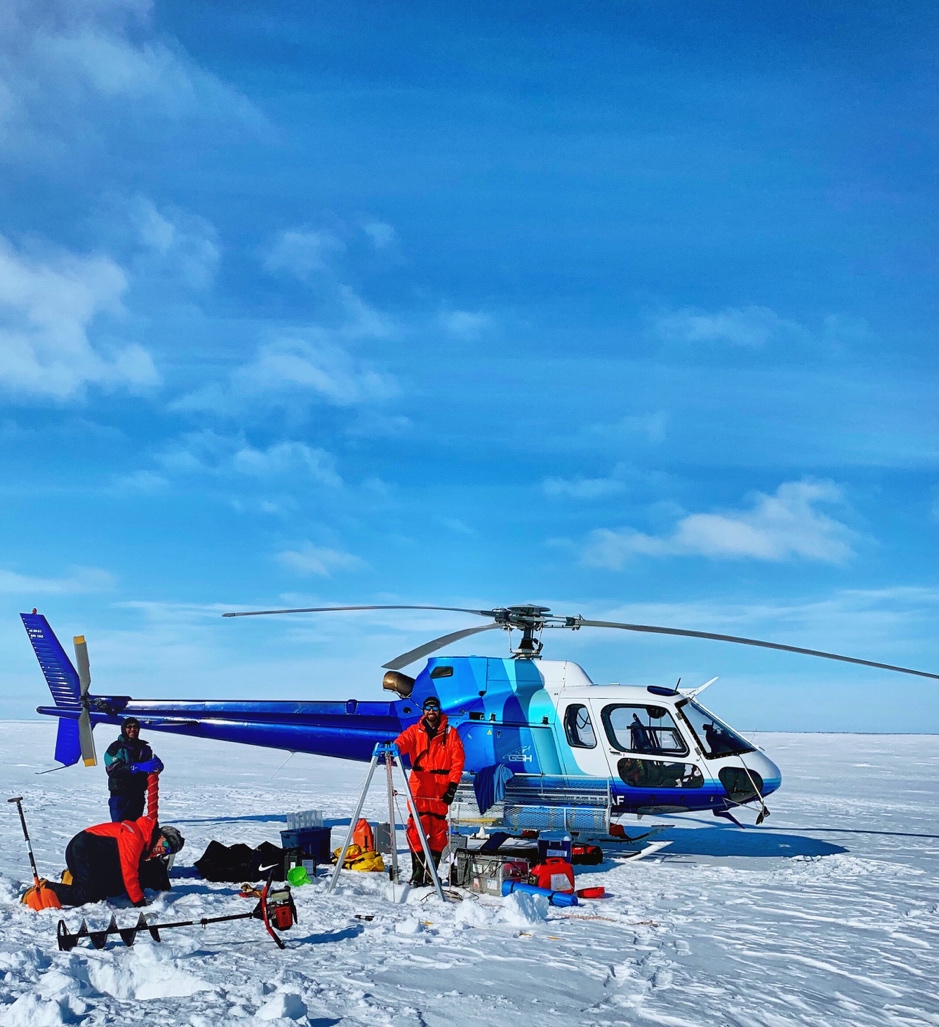 Although the field team was sometimes faced with transient hostile microclimates, thanks to Miles and Connor’s knowledge of the land, safe alternatives were always found to wait those out. One day, Miles Dillon’s hunting cabin served as shelter for the group, illustrating the inestimable importance of science and community partnerships.

While the sampling plan often had to be adapted to local conditions at chosen stations - beached ice, frozen top-layer of sediment, shallow water column, frozen equipment - the field team was nonetheless able to bring samples of water, ice or sediment back to the lab team preparing at the Aurora Research Institute (ARI) everyday. 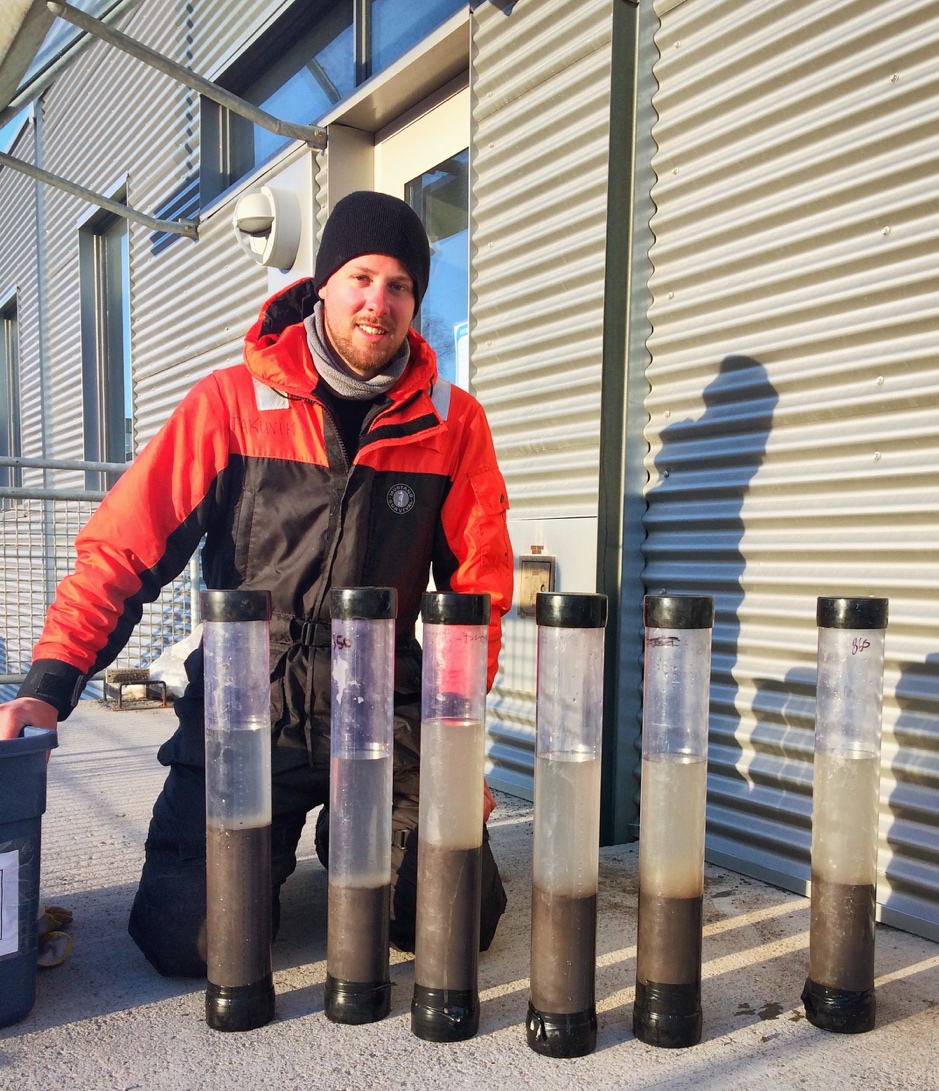 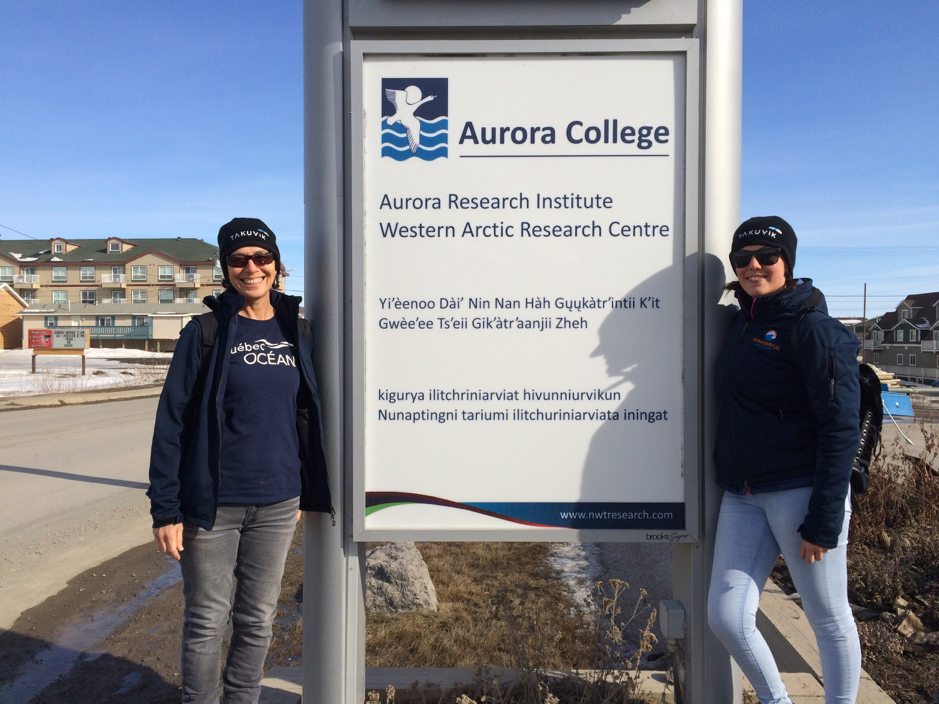 In point of fact, the helicopter’s weight capacity was often reached by the end of the sampling days. The samples would arrive late to ARI - the lab team would work through the nights. While there was little rest for Caroline Guilmette, Marine Béguin and Thomas Bossé-Demers, the topnotch facilities provided by ARI and the luminosity of the midnight sun promoted efficient and enjoyable bouts of work. 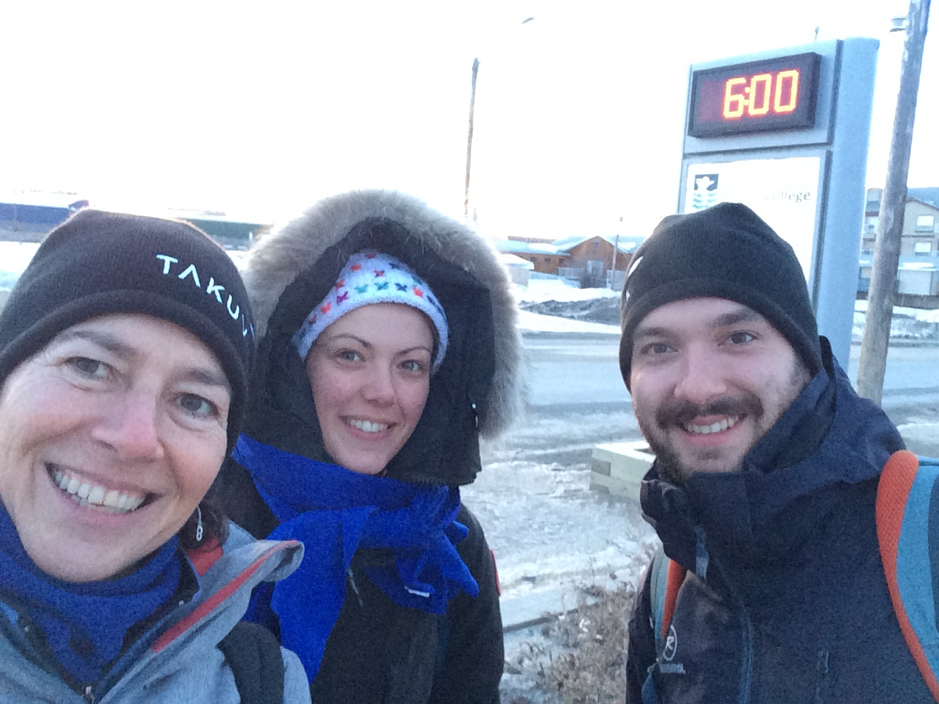 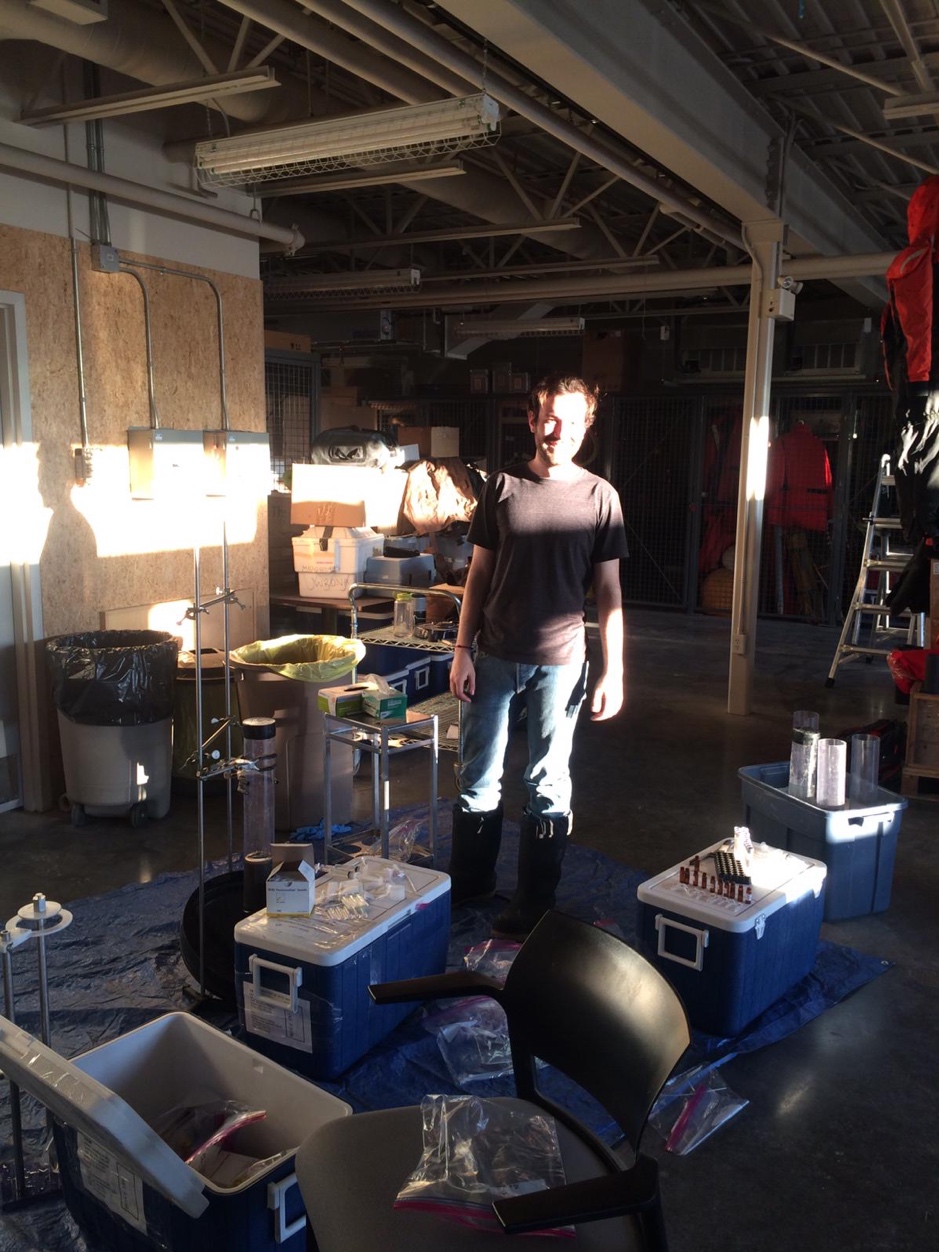 The Eastern sector of the Mackenzie Delta

Carrying the momentum accumulated in the West, the team took to the road. Singing Willie Nelson’s “On the road again”, we hit Highway 10 towards Tuktoyaktuk. The eve of our departure, the road between Inuvik and Tuk was still closed after a blizzard had completely abated visibility and heavy winds had created snow drifts across the road, isolating both communities from one another for several days in a row. But once again, luck was on our side and the field team made it safely to Tuktoyaktuk as we accessed the newly reopened highway. 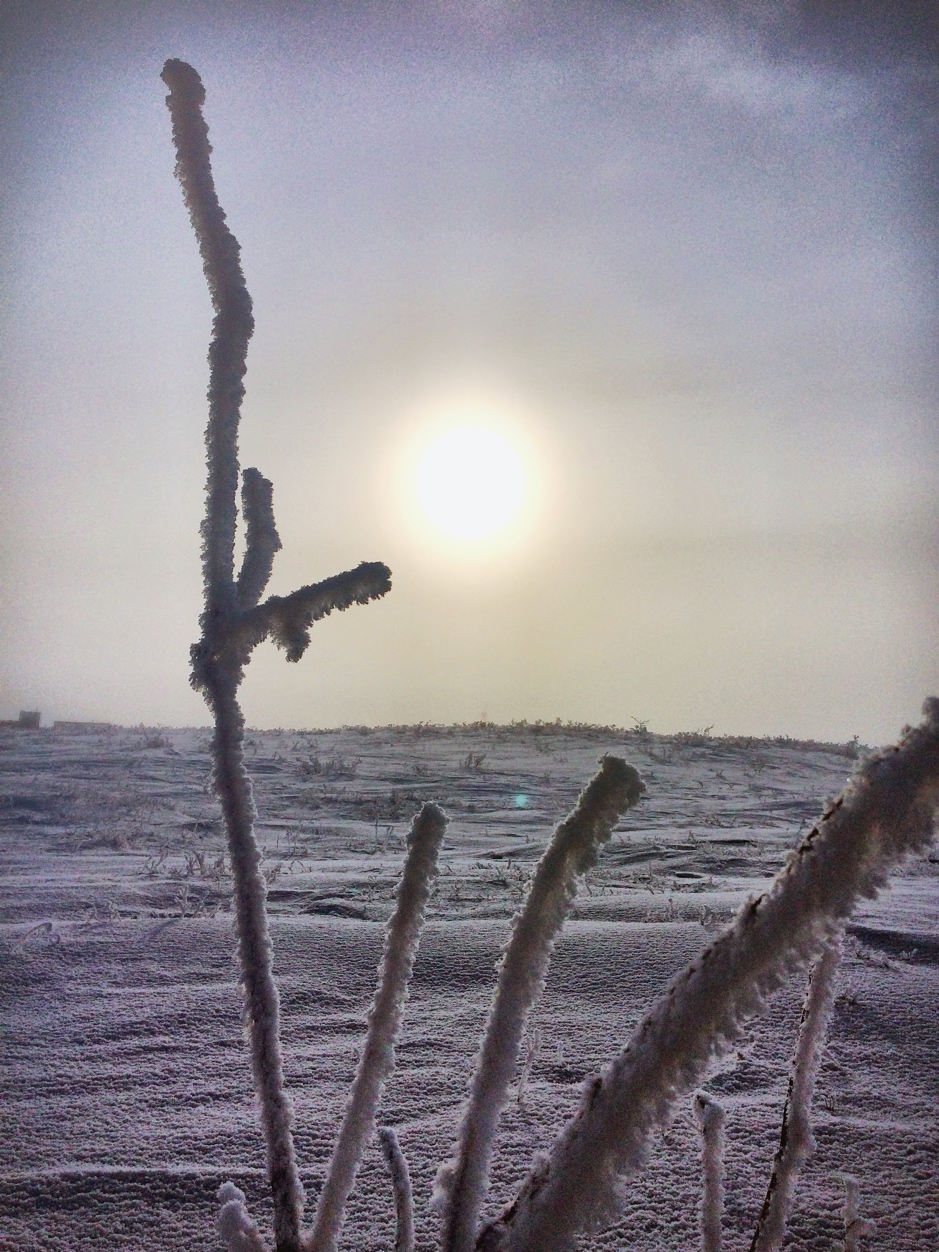 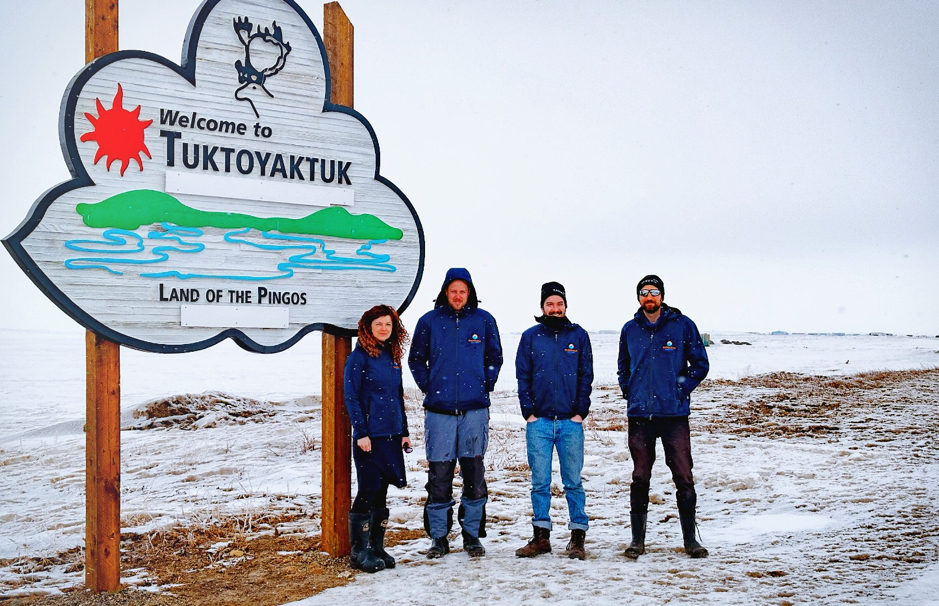 Once in Tuk, we soon met with George Hibbs, Aurora College community adult educator at the Tuktoyaktuk Learning Center (TLC). Not only did George make us feel welcomed by providing our team with ample space to set-up a lab of fortune in the TLC, but he also greeted us with gifts and oatcakes his lovely wife Carol had baked. 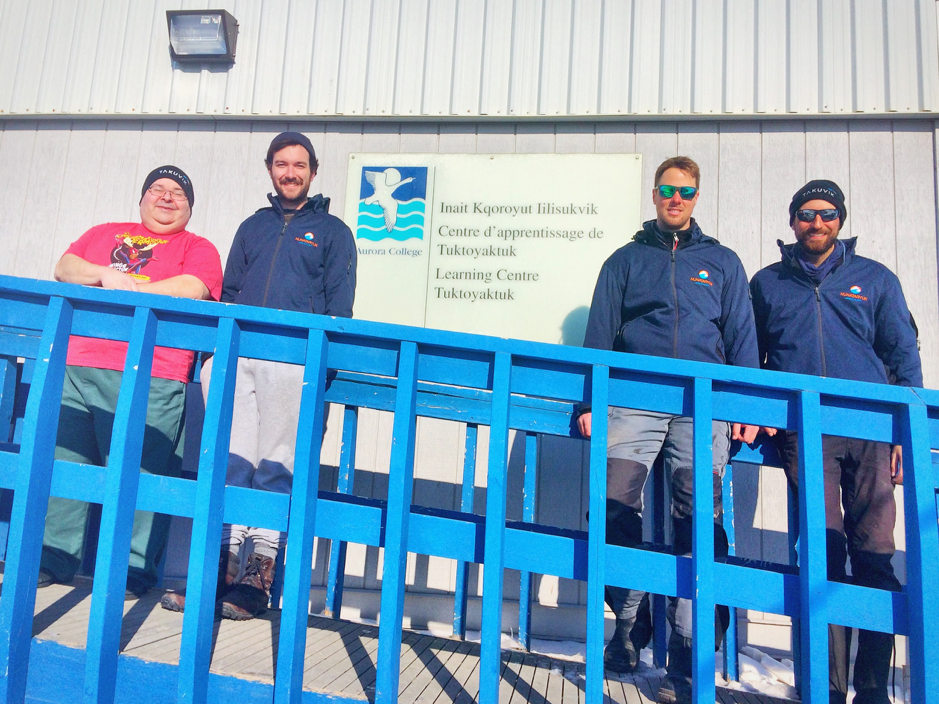 In preparation for the two sampling days planned in the Eastern sector of the Mackenzie Delta (Kugmallit and Kittigazuit Bays) our team also promptly met with Erwin Elias (Elias Services) and the two fundamental people who would make up the rest of the Eastern sector team: Raymond Ettagiak (field worker) and Sammy Gruben Jr. (wildlife monitor). Together, we discussed the operations to be conducted and the strategy to access stations via snowmobiles. 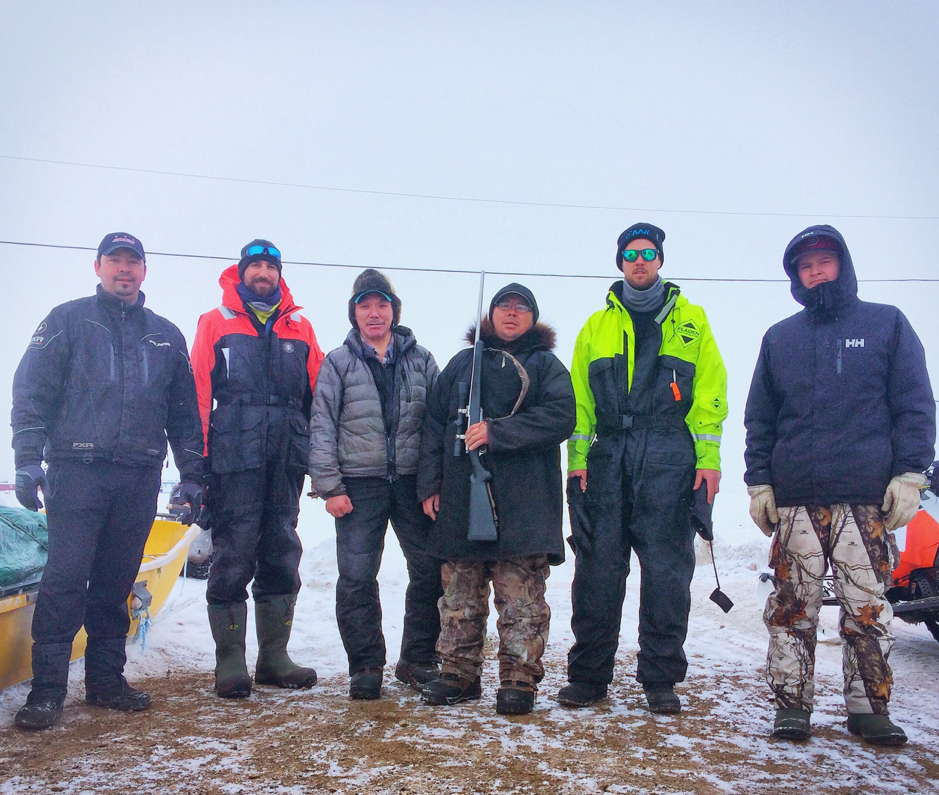 On the first day of sampling in the East, thick morning fog could have seriously complicated the exploration. However, the team was in Raymond and Sammy’s backyard. They knew their way, interpreting and following features at the surface of the ice regardless of the veiling pea soup. The days were full and intense, just like they had been in the West… exception made of the packing and unpacking dance twist which had been simplified by the large sled and kamotik carried behind the snowmobiles by Sammy and Raymond. At the end of the day, the samples still needed to transit back to ARI in Inuvik where the lab team would repeat every operation conducted thus far. Fortunately we partnered with Davonna Kasook, resident of Inuvik and resource management coordinator for the Inuvialuit Game Council, who offered to bring back the samples to the research institute as she was making the trip to Inuvik. 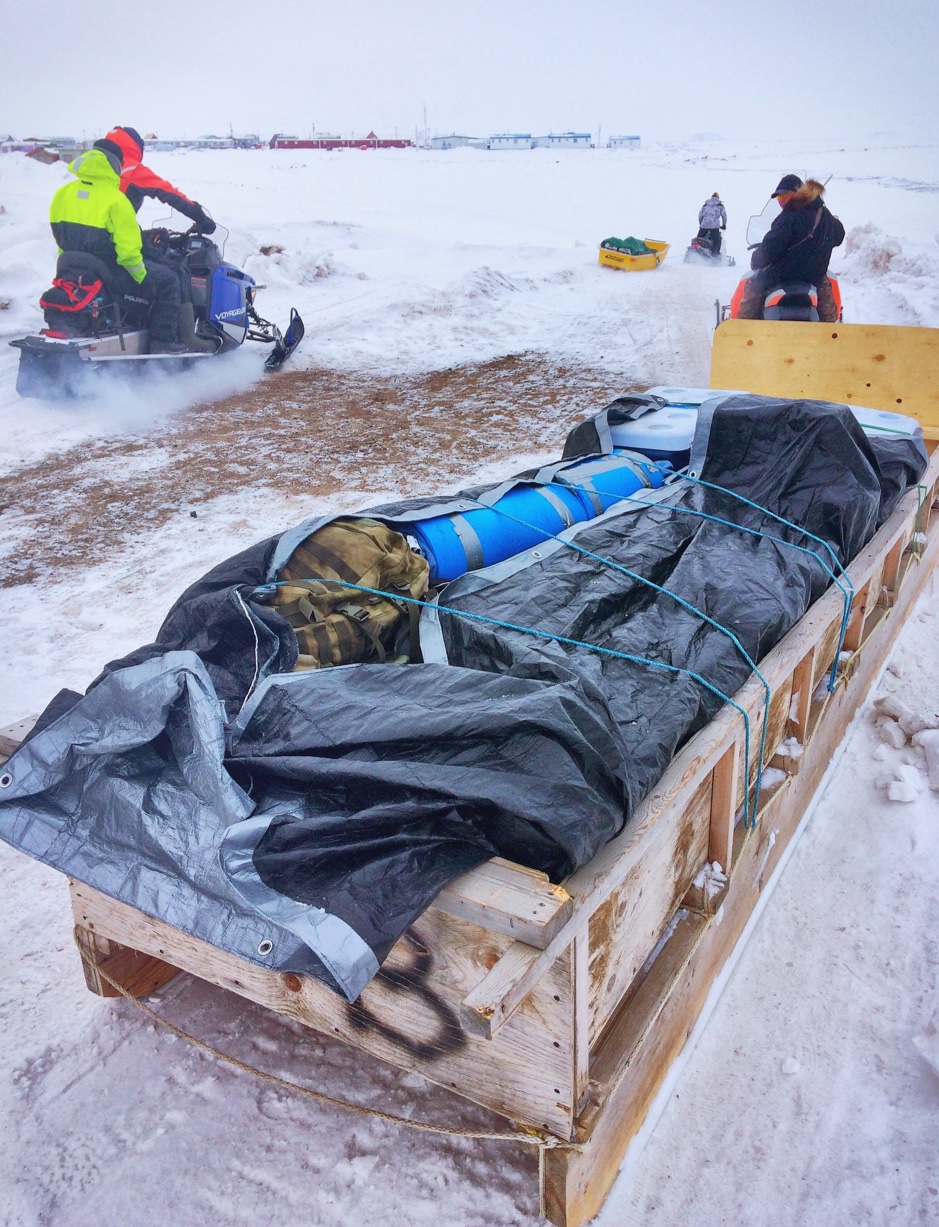 Altogether, during the 5 days in the field, 22 stations were sampled; 353 liters of water were collected, filtered, and analyzed; 15 sediment cores were extracted, cut and drained for pore water; 7 ice cores were taken, cut into 24 slices, melted and analyzed. A good kick-off to the season. It was now time to pack up and as we moved our gear towards warehouses and storage areas, the floor of the ARI loading bay finally saw the light of day. The team members felt lighthearted as they drove back to the airport with Canned Heat’s version of “On the road again” blasting on the radio. 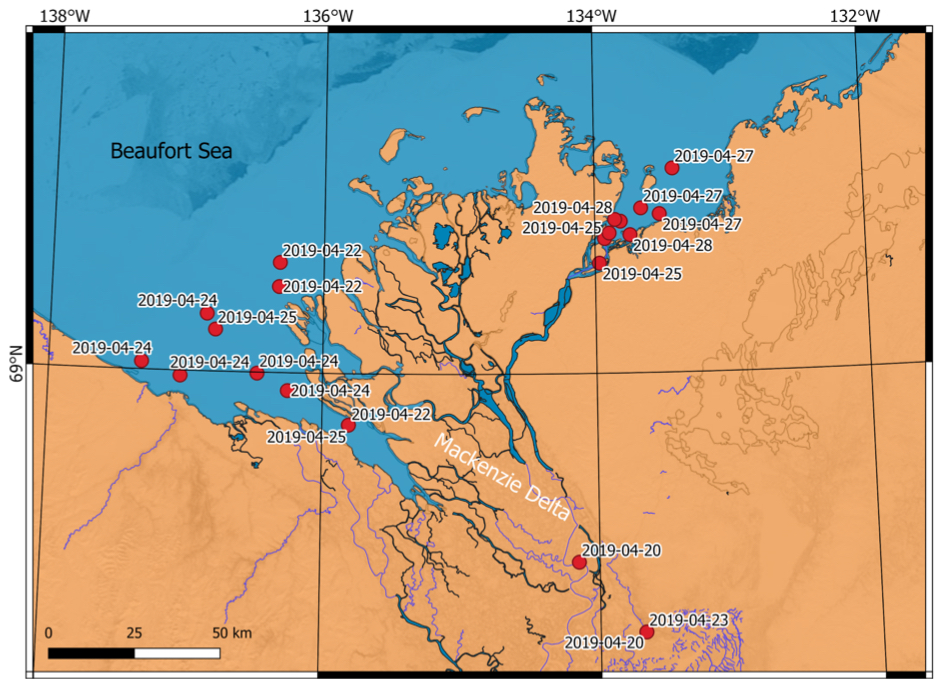