In February 2019, members of the Nunataryuk WP4 “Coastal Waters” team conduct a tour of the Northwest Territories communities involved in the field campaigns planned this year: Inuvik, Aklavik and Tuktoyaktuk in Canada.

The main objective of the trip is to meet with the several individuals, groups, organisations, institutions connected to the project with the overarching hope of establishing meaningful exchanges both in terms of science and culture. The tour is stewarded by Marie-Hélène Forget (Takuvik coordinator at ULaval), Martine Lizotte, (Takuvik research associate at ULaval) and Gwénaëlle Chaillou (professor at ISMER) and starts out in Inuvik, a close-knit community of about 3,400 habitants. 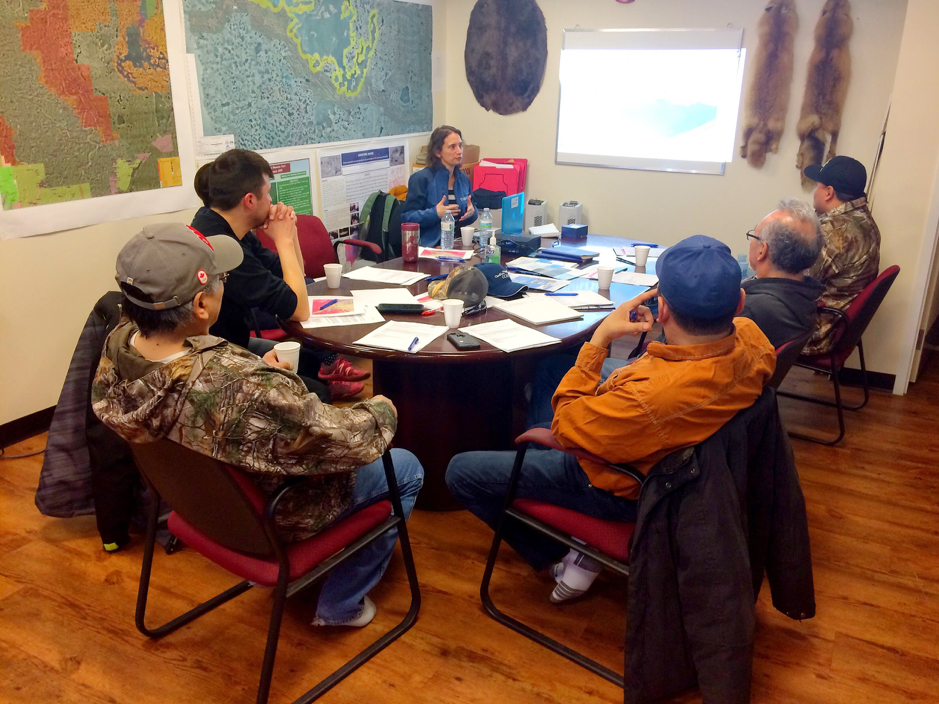 The WP4 team members first meet with the directors of the Inuvik Hunters and Trappers Committee (IHTC) along with Anita Ruben (resource person for the IHTC) during an evening meeting punctuated by reciprocation and discussions on issues related to the scientific background and the proposed activities of the Nunataruyk WP4 Coastal Waters project (mouse-over the picture above for the complete list of names). The conversation is mainly focused on (1) the proposed timeline of operations, (2) the two main sampling areas, Mackenzie and Shallow Bays in the West and Kittigazuit and Kugmalit Bays in the East, (3) the hunting-trapping-fishing activities of the communities bordering the coastal waters and (4) the prospects of hiring local community members to aid in the safe and respectful deployment of instruments and transportation of people. 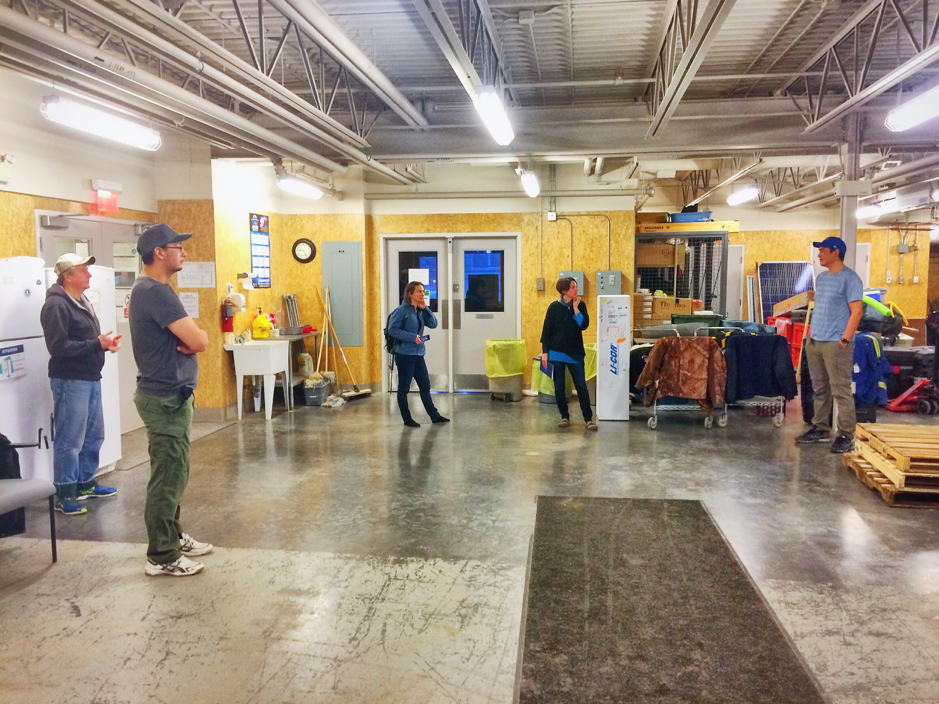 During their time in Inuvik, the WP4 team also meets with the supporting staff of the Western Arctic Research Centre (WARC) of the Aurora Research Institute (ARI): Annika Trimble, Bessie Rogers, Edwin Amos, Greg Elias, Joel McAlister and Niccole Hammer (above) who provide invaluable support to the visiting scientists on several fronts: logistics, accomodation, outreach, and more. Finally, to further develop ties and the meshing between their group and the local activities conducted by the Department of Fisheries and Oceans (DFO) Canada, the group also meets with Jasmine Brewster, Marine Protected Area Biologist, and Connie Blakeston, Inuvialuit Settlement Region Program Coordinator for DFO in Inuvik. 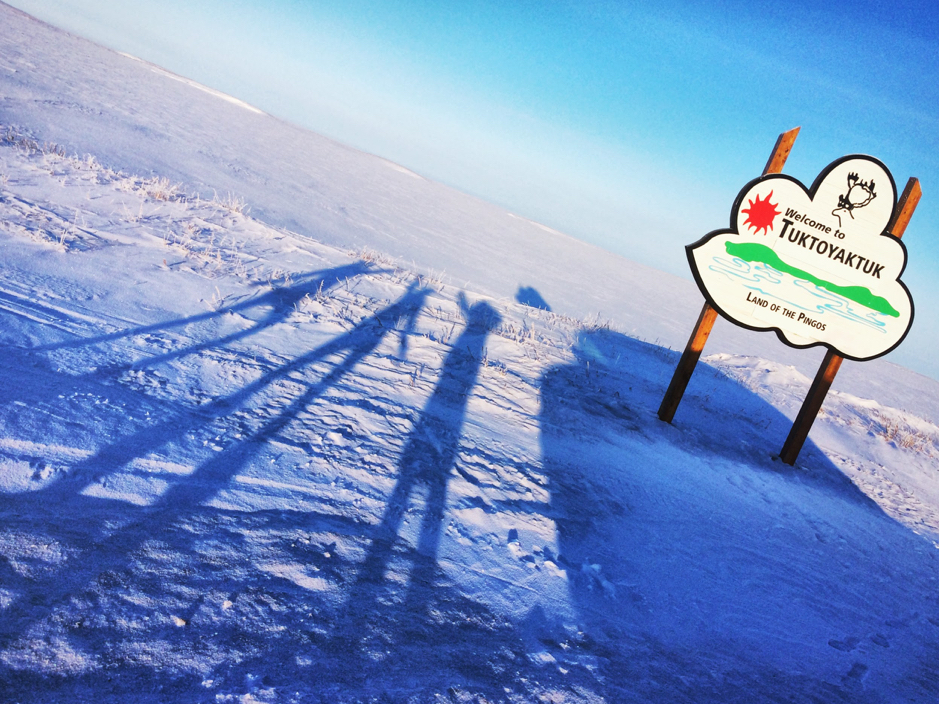 After a couple of days in Inuvik, the WP4 team hits the road that leads North to the uppermost edge of Canada’s mainland, to Tuktoyaktuk. The scientists stop along the way to admire some of the land’s natural features such as the famous pingos (above), dome-shaped mounds of earth-covered ice found in the Arctic. A busy schedule awaits them during the next few days in Tuktoyaktuk but the coffee and energy bars graciously provided by George Hibbs, community adult educator for the Aurora College at the Tuktoyaktuk Learning Center, help kick off the first day on a great note (below). The oceanographic team hopes to set up their scientific instruments during part of the planned field season in the Tuktoyaktuk Learning Center located directly on the shores of the Arctic Ocean. In order to substantiate scientific plans here, Gwénaëlle Chaillou discusses the possibility of taking groundwater samples in different nearshore locations with Tuktoyaktuk’s Senior Administrative Officer, Shawn Stuckey (below). 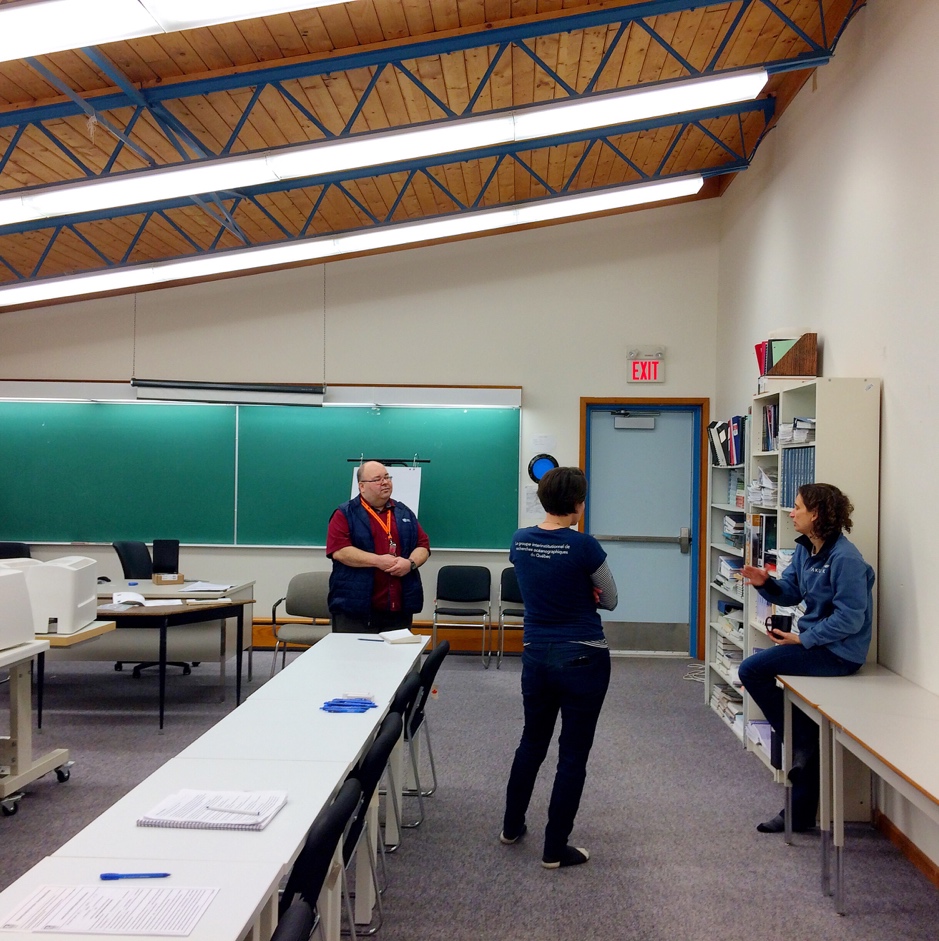 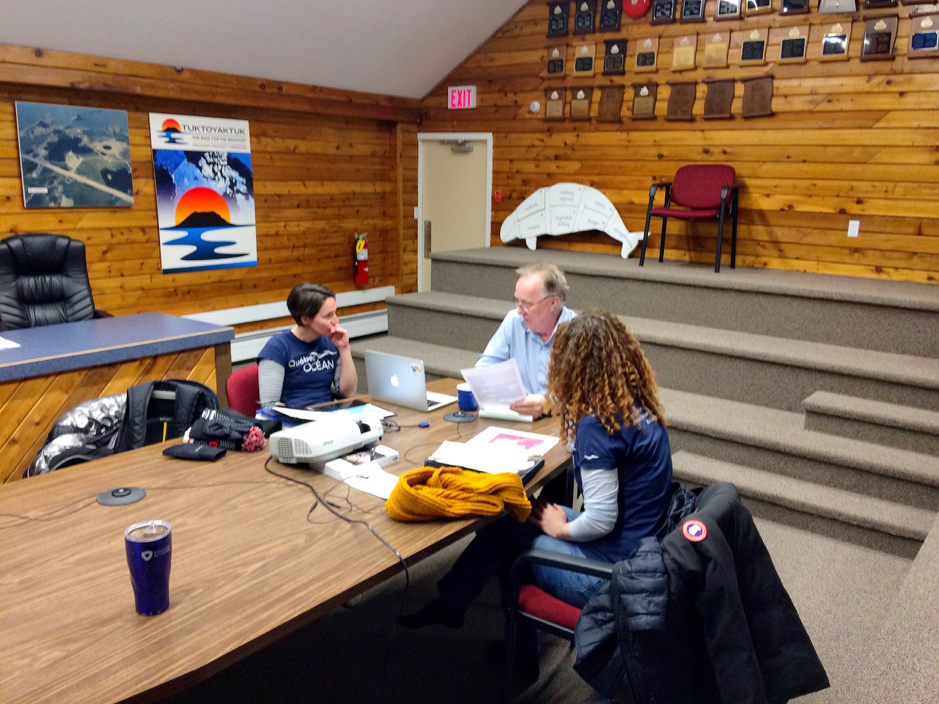 The next meeting involving Shaun Cormier and Kendyce Cockney, Project Manager and Assistant, respectively, at the Tuktoyaktuk Community Corporation (image below) proves to be very stimulating as the scientists learn more about a climate change resiliency project developed and implemented in the Tuktoyaktuk Hamlet. The community-based monitoring program aims at offering local residents the skills to monitor climate change in their own community and represents a golden opportunity for the scientists to involve local residents in their project looking into the impacts of permafrost thaw on marine coastal ecosystems. 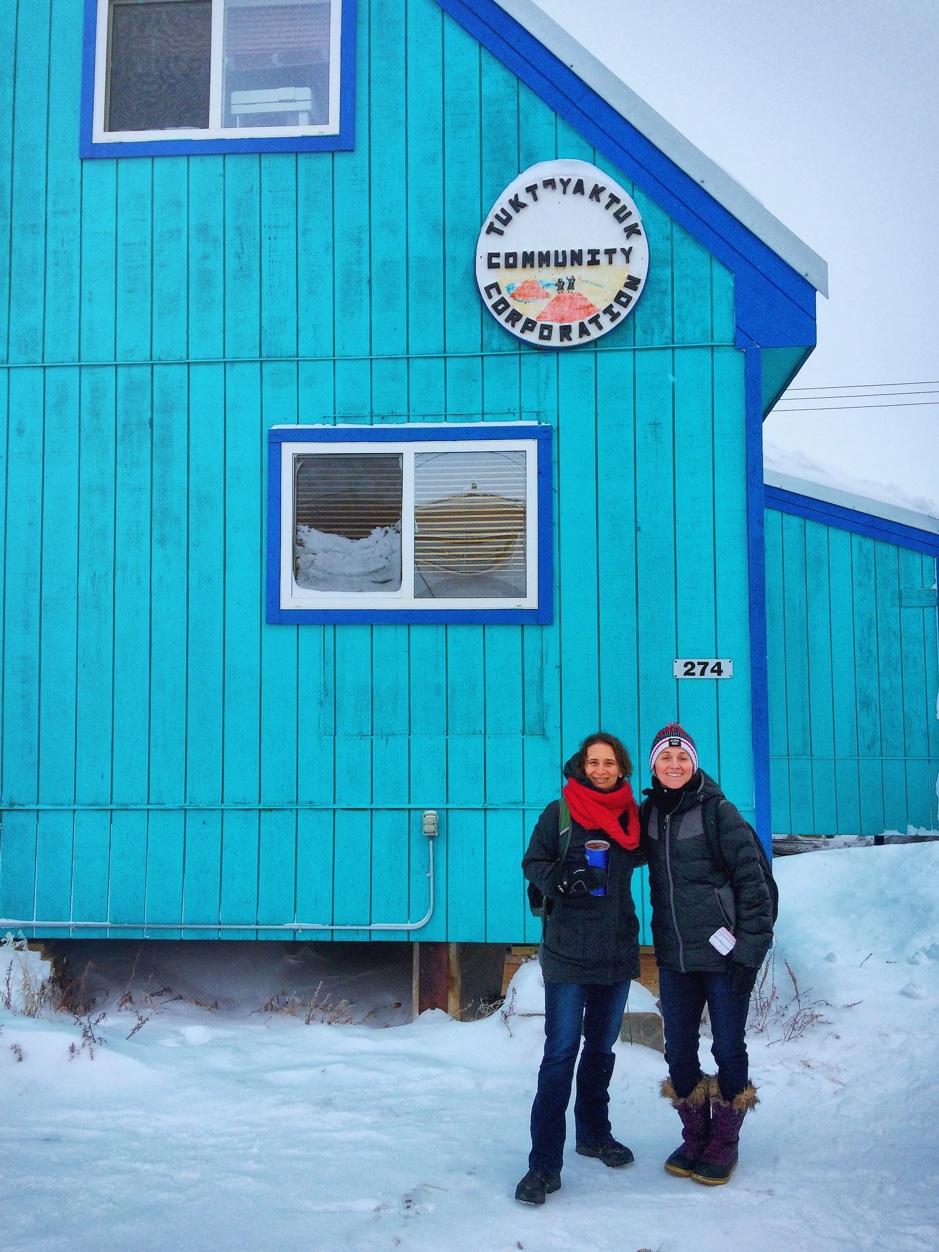 That same evening, the three WP4 delegates are greeted by Glenna Emaghok, resource person for the Tuktoyaktuk HTC moments before meeting with the directors of the THCT (mouse-over the below image for the complete list of names). The discussions are once again punctuated by the desire to find common ground on issues related to timing and geographical extent of the proposed activities as well as the plans to hire local community members to take part in the different segments of the scientific program. 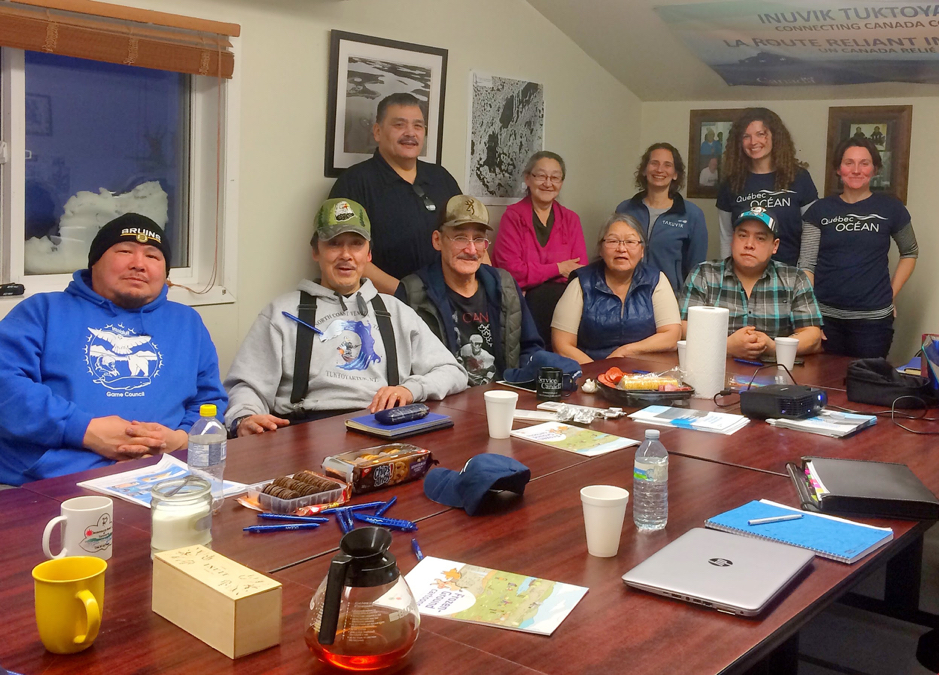 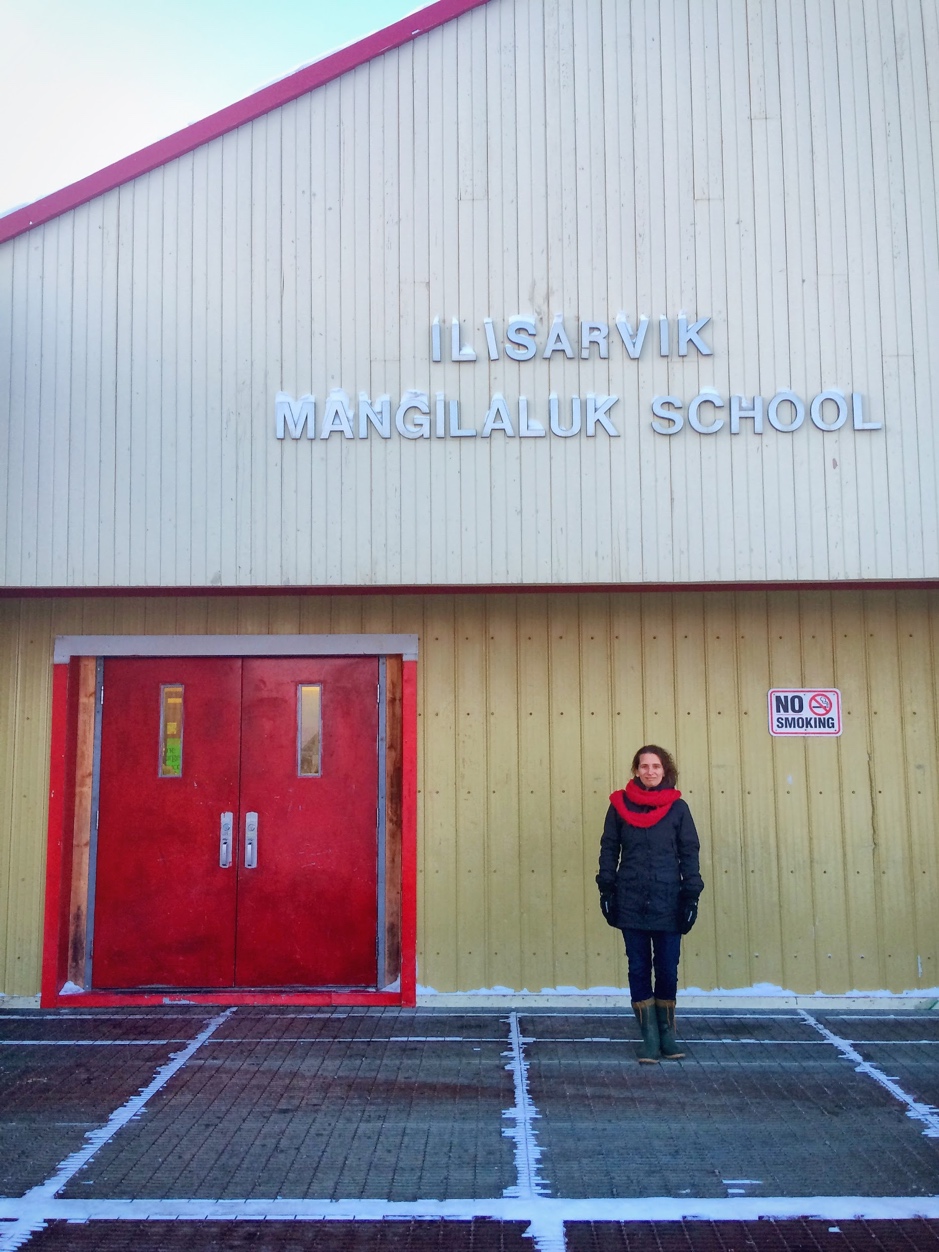 The next day, before returning to Inuvik, the Takuvik team members meet with science teacher and vice-principal of the Mangilaluk School, Ephraim Warren, in Tuktoyaktuk (above). They discuss the possibility for the WP4 team to involve the school kids in scientific presentations and hands-on activities focused on the use of satellites to view Earth from space and how these satellites can help scientists and kids alike to better understand fast-pace changes, such as permafrost thaw, in their region. They also share with Ephraim the Frozen-Ground Cartoon, a comic strip that aims to explain international permafrost research, all the while giving news about the upcoming plans for an augmented reality project showcasing 3D illustrations, interactive maps and videos. 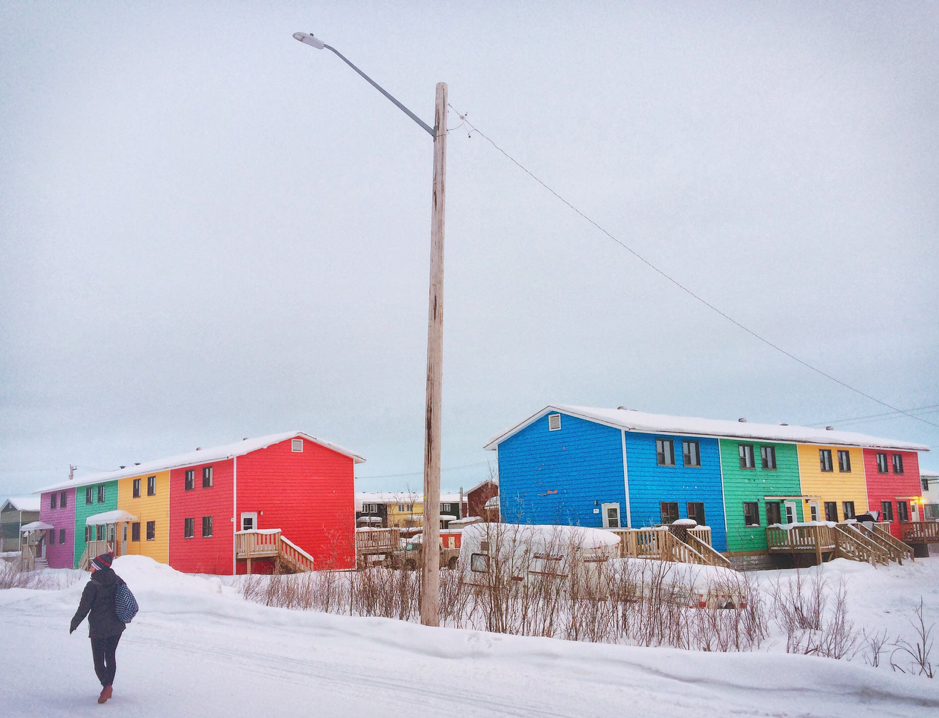 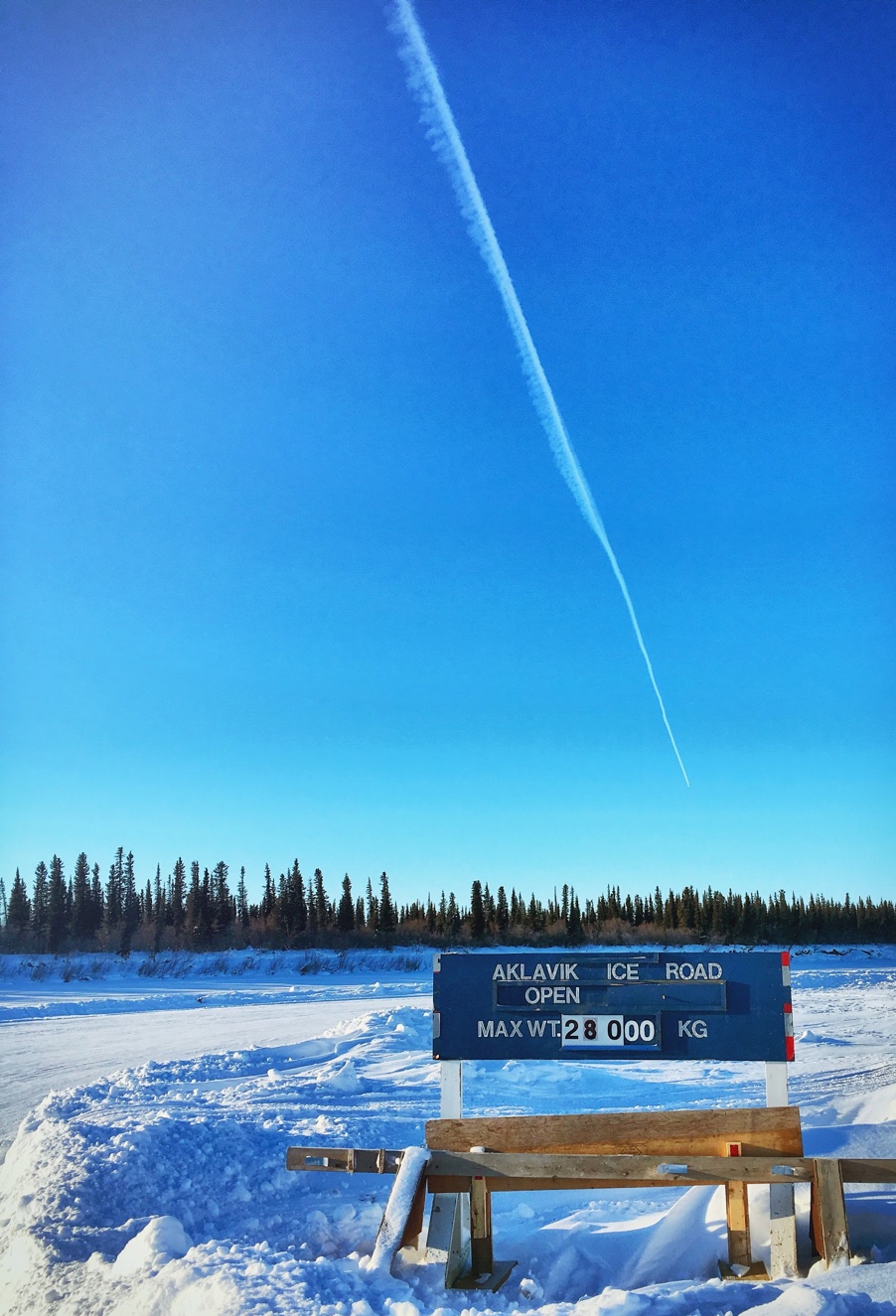 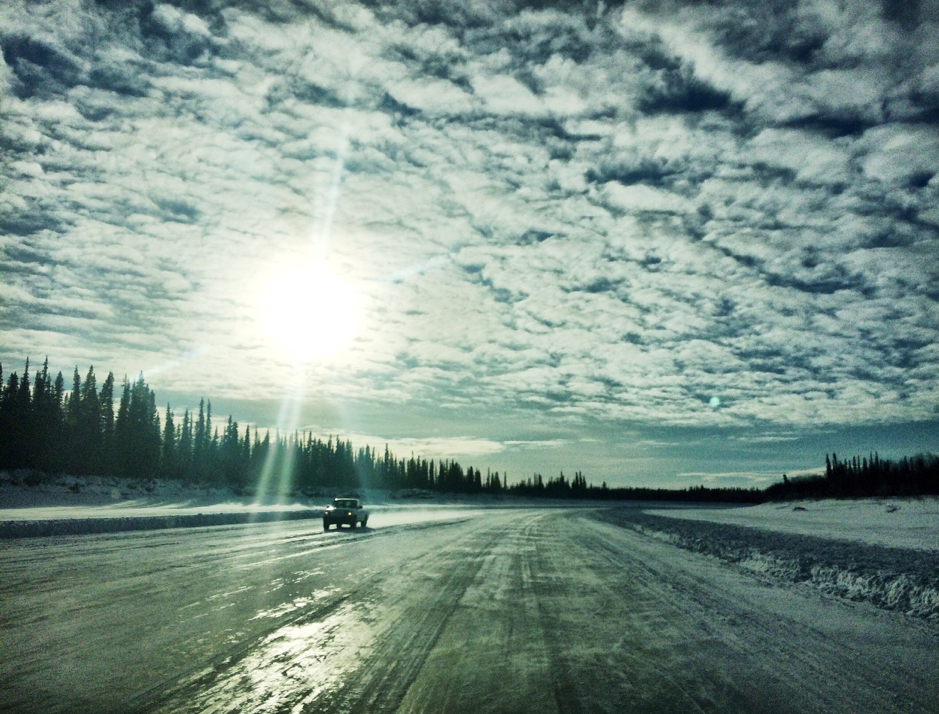 After spending part of the weekend in Inuvik (above) and enjoying the newly reopened community pool at the Midnight Sun Complex, the team hits the road again. This time, the delegates drive on the meandering ice road across the streams of the Mackenzie Delta leading to Aklavik (above), a Hamlet with a population of less than 1000 residents located on the very northwestern edge of the Northwest Territories. 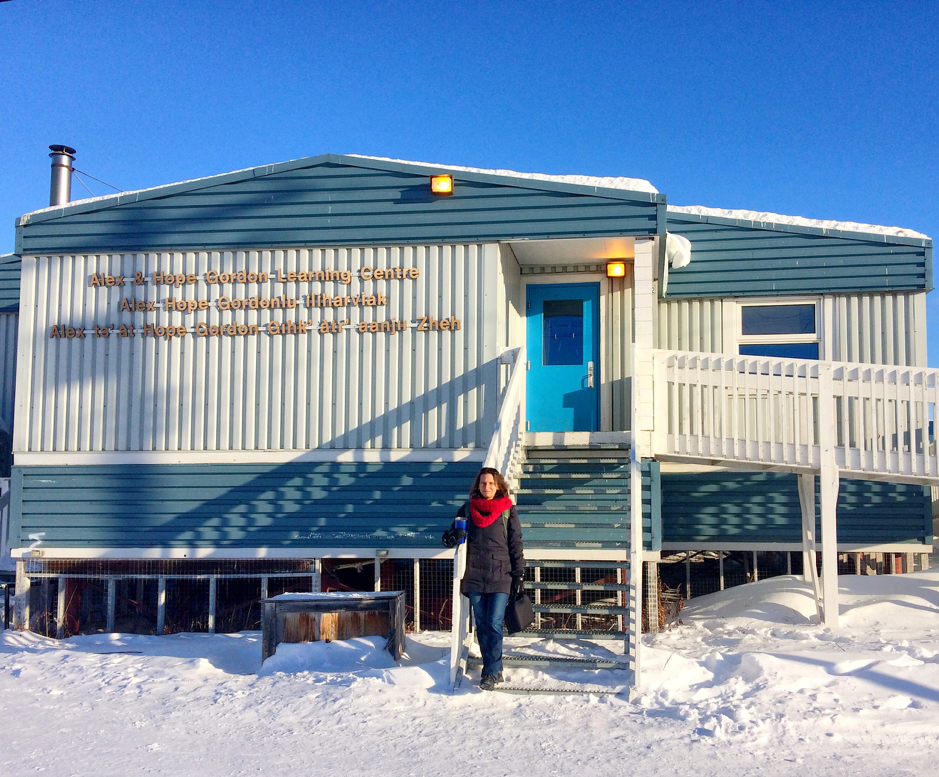 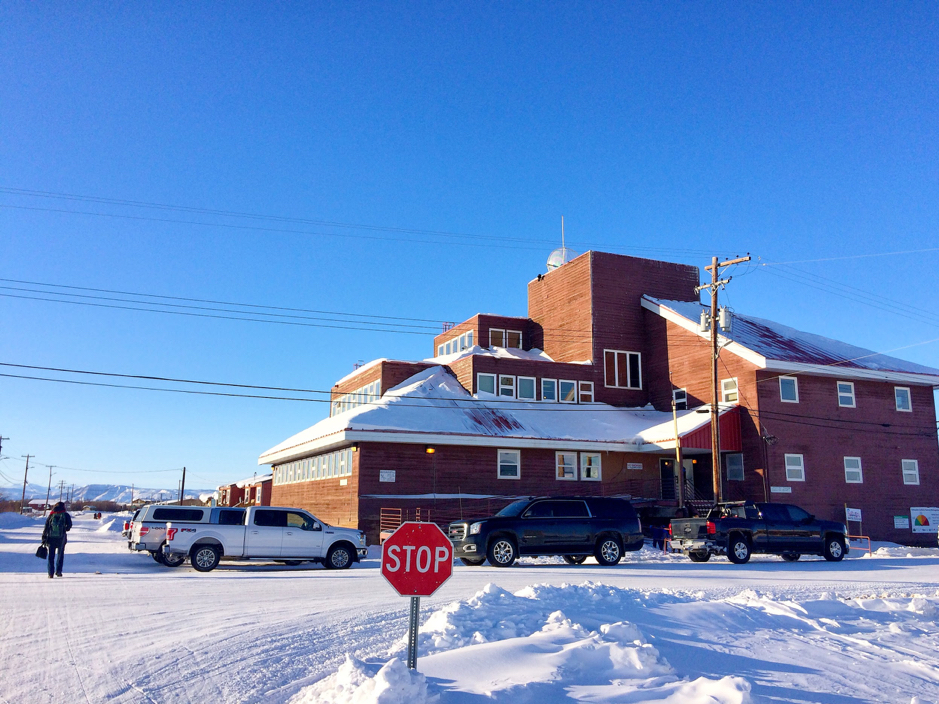 In the hope of building a network of people and establishing possibilities for collaborations in the community of Aklavik, the scientists meet with Tatiana Frederickson, Community Adult Educator at the Aklavik Learning Center (above) as well as Fred Behrens, Aklavik’s Senior Administrative Officer (above). The team also stops by the Moose Kerr School (below) in the anticipation of talking with School Principal Vivian Wirth but an out-of-town meeting prompts the team to pursue already begun email exchanges. 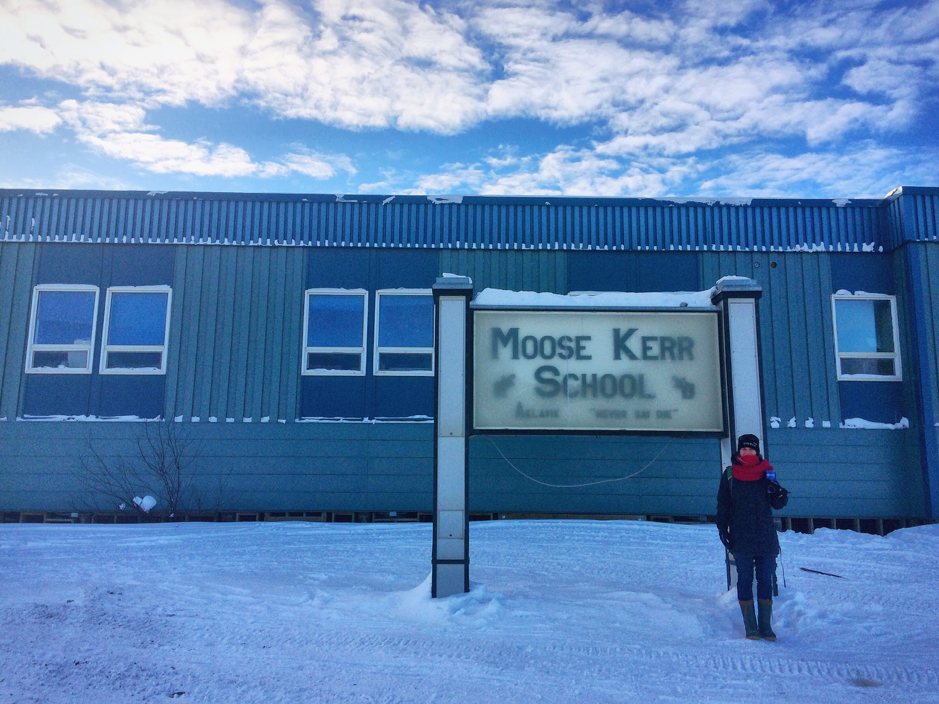 During their stay in Aklavik, the scientists have the rare opportunity for daily discussions with the Aklavik Inn caretaker, Elder Brenda Benoit, who offers her unique insight into how climate change has shifted animal behavioral patterns, especially caribou, in the region. She also talks about the increased presence of grizzly bears in the Hamlet and her memories of bountiful berry picking in her favored spots that now are no more. Similar issues pertaining to caribou and other wildlife are raised during a meeting with the Aklavik HTC board of directors. At the big brown building of municipal and community affairs, Michelle Gruben and Cassandra Paul, resource person and assistant, respectively, for the Aklavik HTC warmly welcome us (below). That day we meet with AHTC board directors Deon Array, Patrick Gordon, Billy Archie, and Jordan McLeod and discuss in greater detail the operations that would be conducted in MacKenzie and Shallow Bays, in the western portion of the Delta. 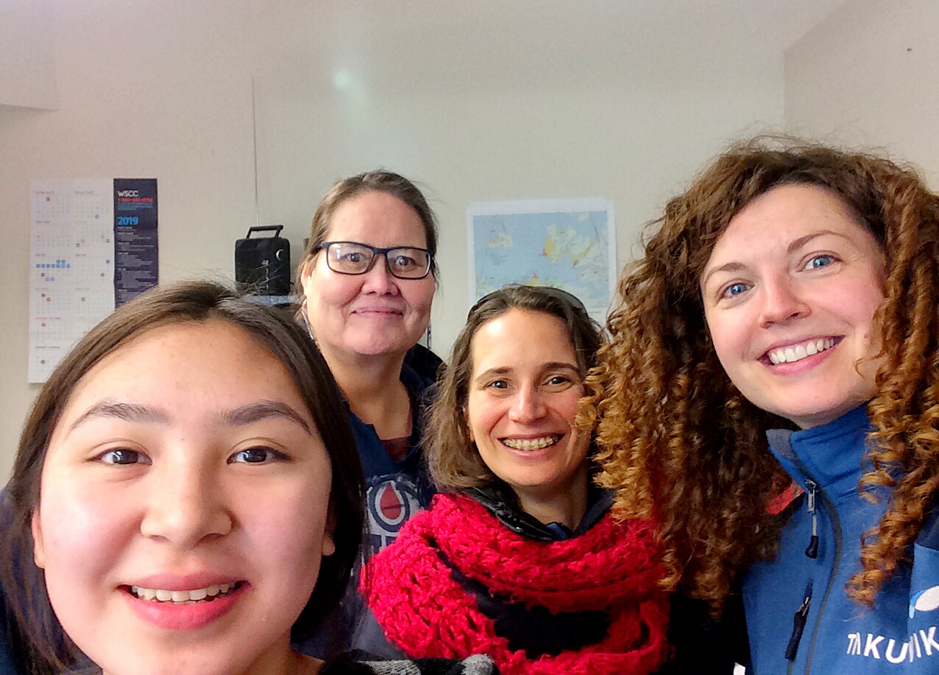 The meeting with the AHTC board members that day ends in exchanges on the possible activities to do in Aklavik during winter. Driving on the ice road towards the western Richardson Mountain range immediately resonates with the team aspiring to capture bouts of local beauty. The trip is quickly halted as the eager scientists take a wrong turn onto the skidoo trail a few meters away from the actual ice road. Thankfully, with the help from Michelle Gruben, Brenda Benoit, Tumma Kasook and Cody Kogiak, the rental SUV is very quickly pulled out from its snowy predicament (below). Seems like everyday heroes do exist! 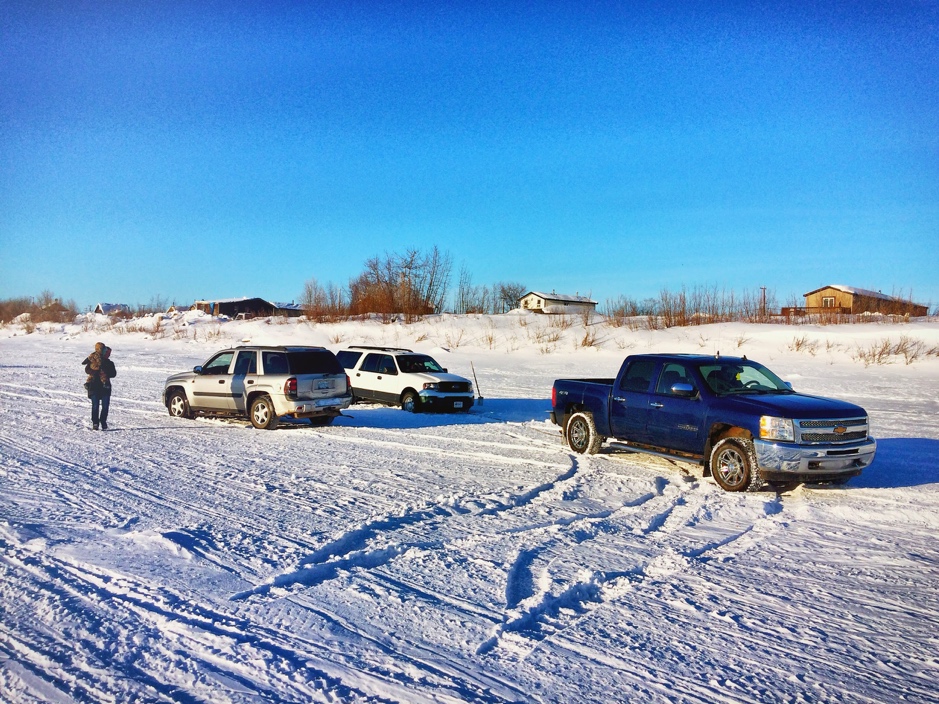 The next day, the team members head back to Inuvik and on the eve of their departure meet up with friend and colleague Michelle Clyde, Former ArcticNet School’s on Board program coordinator, now in Inuvik and working for Parks Canada as their External Relations Manager. They have a taste of Alestine’s famous reindeer chili and white fish tacos, all the while enjoying a last sunset. The team hopes to return in April 2019 for the first part of their field campaign, this time confident with the ties they have forged with local members of the Mackenzie Delta communities. 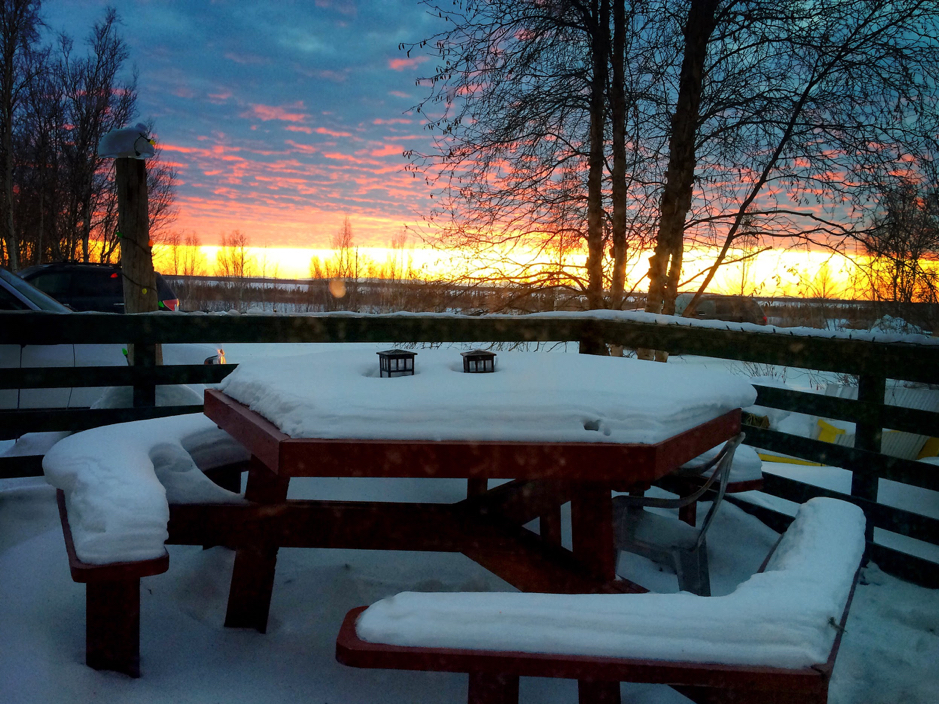