Yukon Coast Blog no.4 - You can find me on the mainland, call me on my satphone…

Challenging working conditions and a full working schedule left us with little time or energy for writing a blog post while there. Hence a blog entry in retrospect: 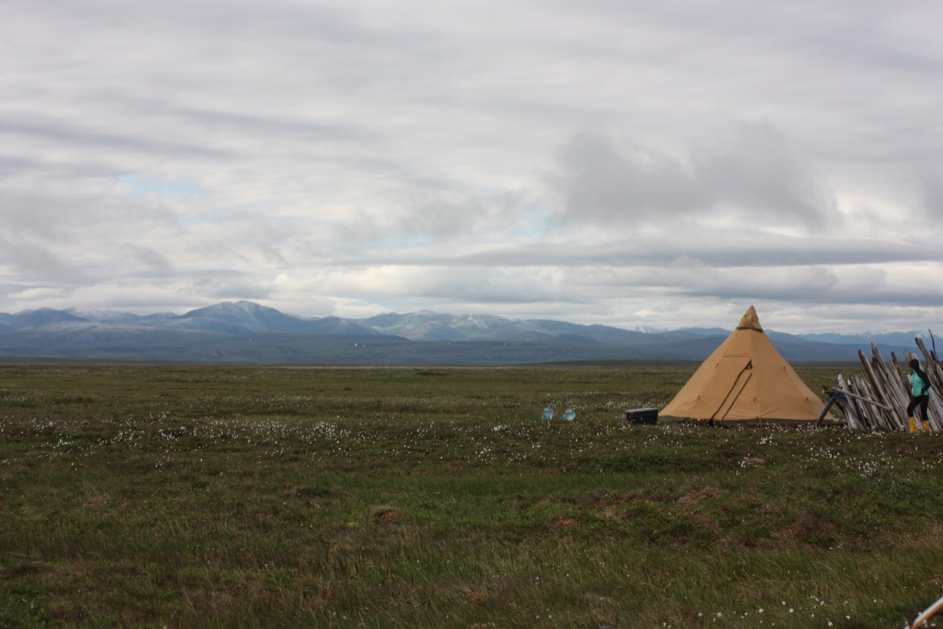 After having set up the camp and introducing the new arrivals (Andreas Richter, Gustav Hugelius, Rachele Lodi and Victoria Martin) to their accommodation for the next 12 days it was time for some sampling action! 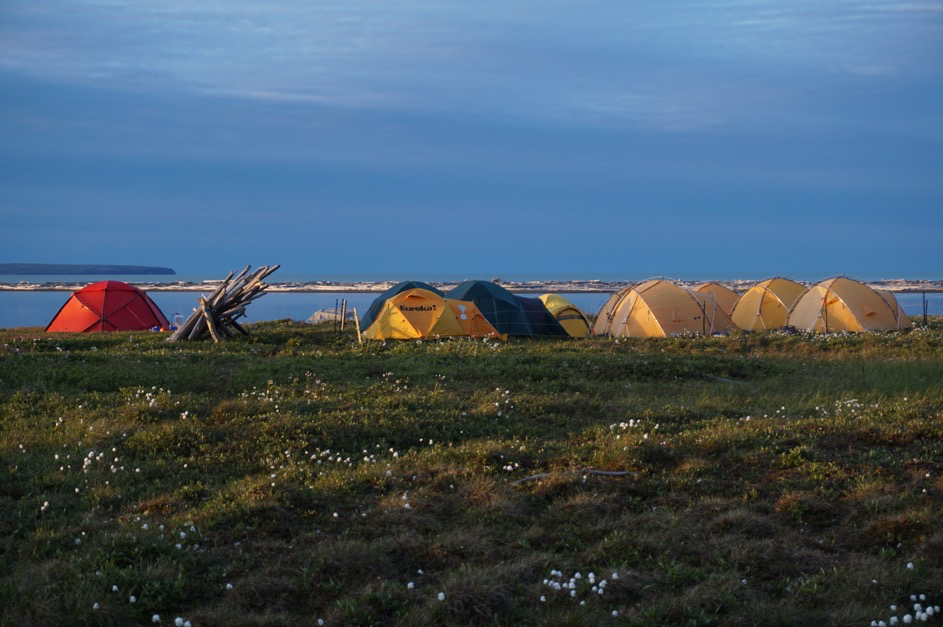 To sample the full land-to-ocean continuum we needed to dig soil pits in every main landscape unit representing this part of the Yukon Coast. Six locations for extensive soil quality and microbial activity sampling were chosen. The soil samples from these pits will be analyzed by University of Vienna while extracted pore water will be analyzed at Vrije Universiteit Amsterdam. Digging these soil pits is quite a workout. First walking there with all the heavy equipment, then digging the actual pit and drilling into the permafrost, to finally return with a load that is even heavier because of all the samples. It is a good team exercise nevertheless! At the location of the outflow of the creek, not far from camp, Niek installed a multiparameter probe for logging variation in water quality at 5-minute intervals. Also, an automatic water sampler that took water samples every 6 hours was installed to link probe measurement data to actual water chemistry. Discharge measurements were taken, which together with a water depth logger data and data from a weather station installed nearby will give insight into the hydrological behavior of the watershed. Further upstream in the catchment stream water samples were taken. Moreover, another 40 smaller soil pits were dug and numerous ground-truthing locations were recorded. Stockholm University will link soil properties to landscape classification using various machine learning methods while Vrije Universiteit Amsterdam will extend this analysis into soil pore water and stream water properties. 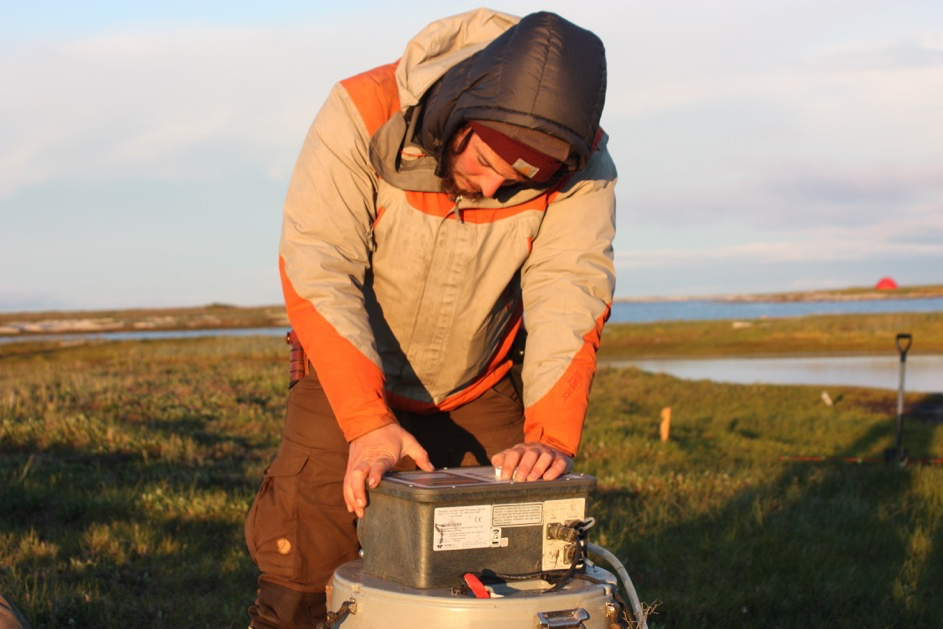 So, how do we get soil samples from permafrost? We used two techniques: One relied on using the permafrost corer, a noisy fuel powered drill that allowed us to extract large volumes of permafrost soil. The second method, one that required a bit more ‘fingerspitzengefühl’ and experience, relied on slamming an iron pipe into the icy ground and then extracting 10 cm of core at a time. 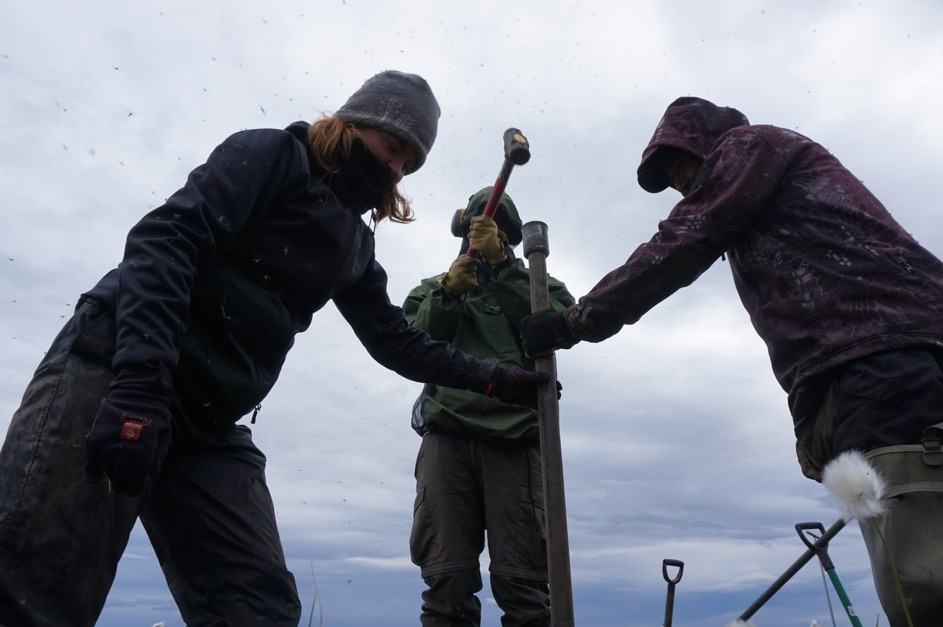 With temperatures ranging between around -2 and 4 degrees Celsius, wind, rain or mosquitos and the occasional snow flake, a mix of candy bars, coffee and sparse tundra naps was applied to keep the spirits up. On the mainland, you don’t think too much, you just do it. And to be honest, it is really satisfying to have a tribal-like gathering for dinner in a tipi after a hard day’s work. 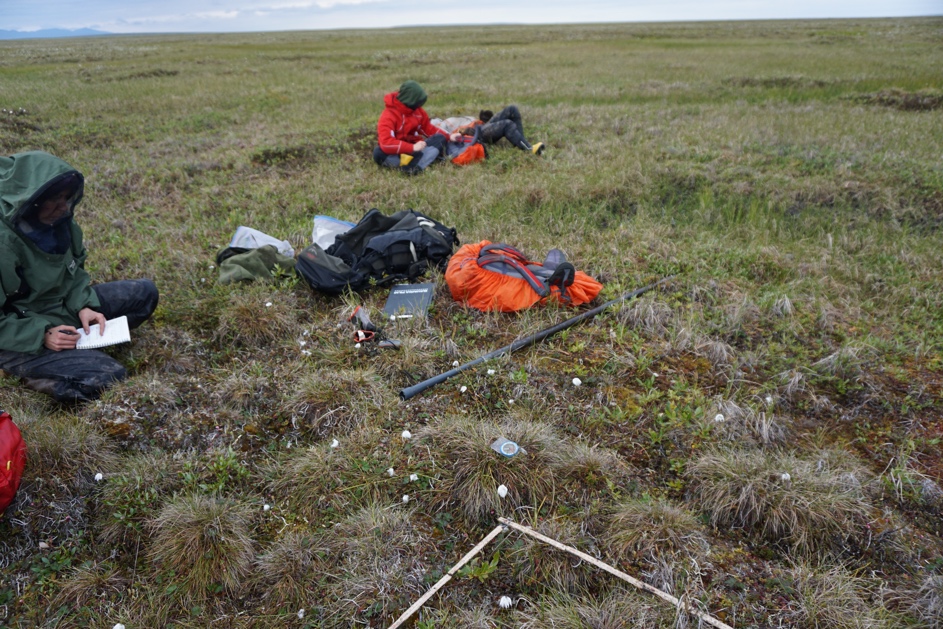 Ivvavik National Park (where the camp was situated) is known for its abundant wildlife, including Grizzly Bear, Wolf and Wolverine. Bears were seen ‘checking out the situation’ soon after we arrived. The automatic water sampler was even used as a toy by one bear which led to loss of some samples. One bear had to be chased off by our wildlife monitor, Peter. But for some reason, a few days after we made our presence clear no bears were seen near the camp anymore. Later in the week, just after sunset, a lone wolf was spotted close to the creek where Justus and Niek were doing some last-of-the-day measurements. It was a beautiful reminder of how special it is to be working out here, in the arctic wilderness. 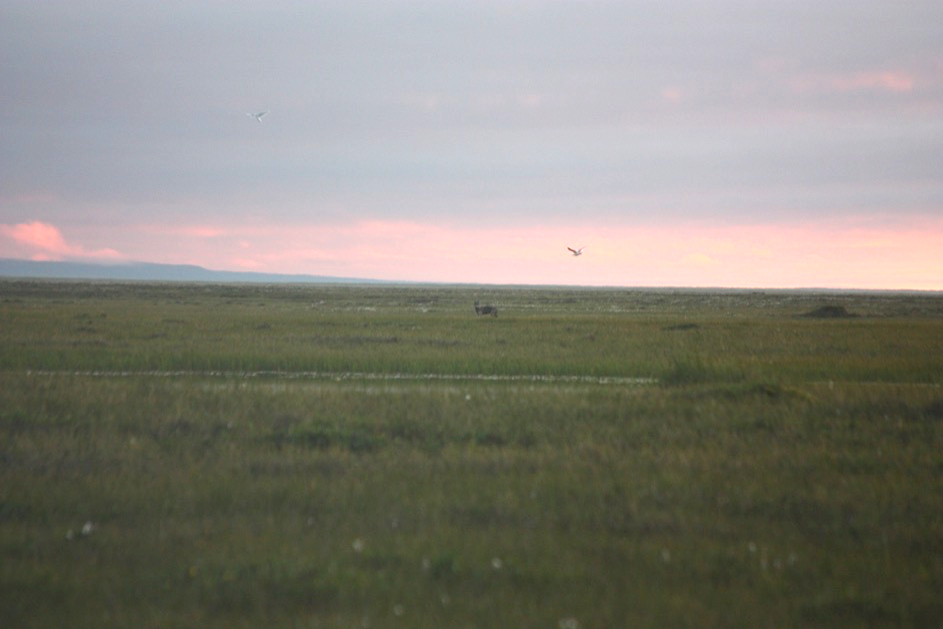 Our mainland expedition ended on the 20th of August, after having endured storm, cold, bears, mosquitoes and mostly ourselves. Nevertheless, everyone was happy with the amount of work we had managed to complete and the good time that we had been sharing.