While flying in to the Island with the Twin Otter we must have crossed some kind of portal that made time even more relative than usual. The days are filled with so many accomplished tasks that celebrating them only lasts a minute before the next urgent task needs to be tackled.

Building our small research vessel Christine, the logistical masterpiece of many research goals on our wish list only in a matter of eight hours of hard work, was the first priority after settling in on Qikiqtaruk. Preparing the boat wouldn’t be as straight forward without the great support from the Park Rangers of the Qikiqtaruk Territorial Park, whose hands have seen many more boat nuts and bolts than all of our hands combined. Whales and seals kept close watch from the cove as the boat was lowered into the water. Setting up ‘The Weather Haven’, our field laboratory, was done in no time too with the help of Frank, our local research assistant. Then, just as we were having lunch outside in the sun, an unusually large and bright white spot appeared on the cliff opposite to camp, across the floodplain. Excitement sparks among the camp’s inhabitants; this is a polar bear! Within two minutes roughly 10.000,- euros worth of binoculars and cameras are pointing in the direction of the beautiful polar bear mother and her cub. George, who has been visiting Herschel Island for at least seven field seasons, had never sighted a polar bear during summer. But there it was, on day one. 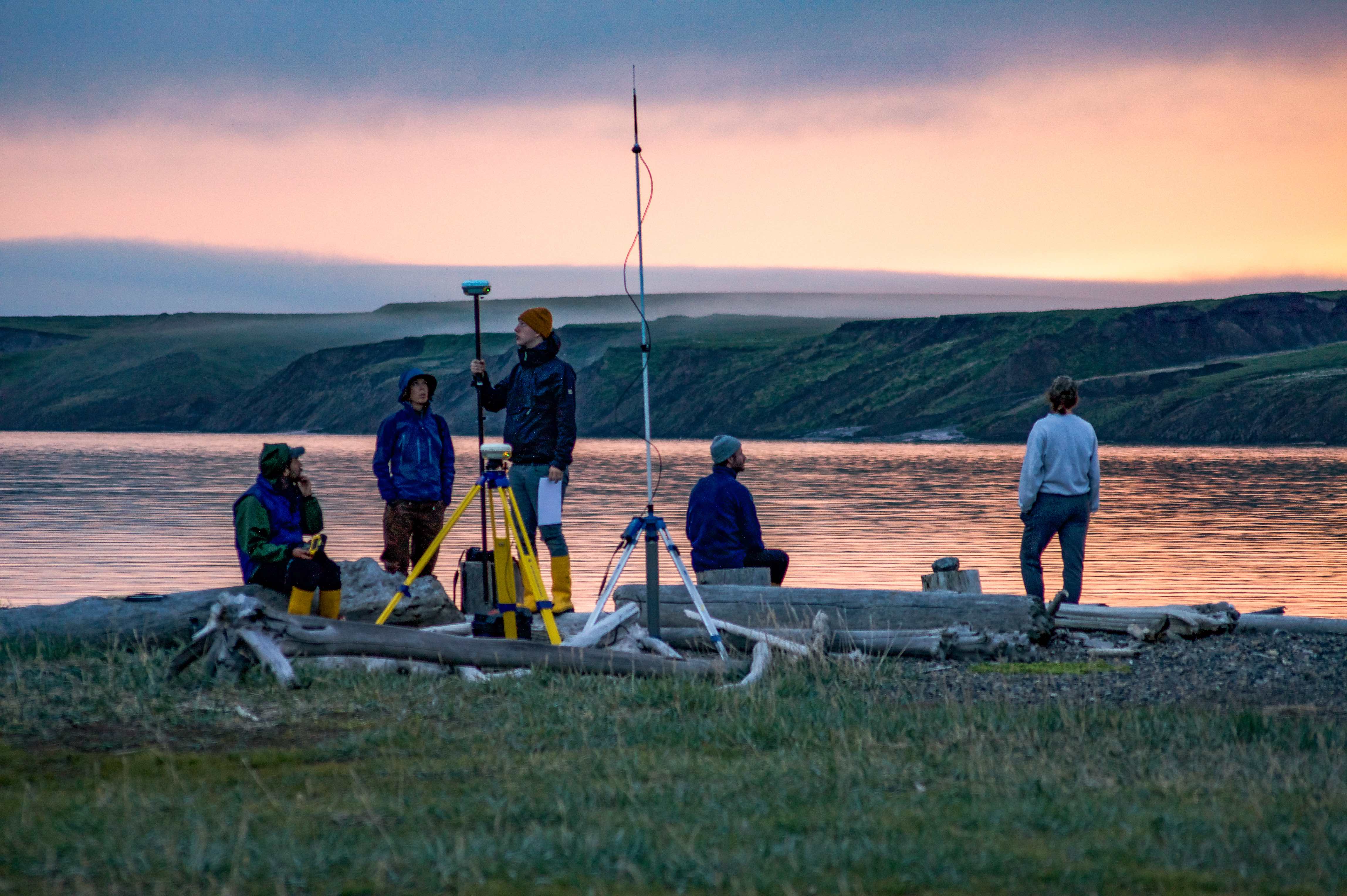 After a safety briefing by Samuel MacLeod, stating to stay in camp, to be extra cautious and to sleep indoors that night, everyone went to bed tired but satisfied by the spectacular welcome to Herschel Island.

Part of the scientific campaign relies on a helicopter tour to several locations along the coast of the Yukon’s mainland coast. The goal: taking detailed GPS measurements and drone imagery of the coastline to track coastal erosion. Being both costly and highly weather dependent we had to do our utmost to be prepared for the flight. In anticipation of a good weather window, we spent at least a day preparing, waiting and watching the weather - but rain started to fall and fog to formed on the mainland. Waiting seemed to take forever and we used the time to read scientific papers, set up the ADCP (sea water current profiler), prepare samples in our lab tent, and wait, wait, wait for the helicopter. Finally the weather started to clear and we could hear our helicopter coming in. The next day our team members Samuel, Gonçalo, and Pedro were treated to a beautiful flight along the Yukon coast. The flight wouldn’t have been a success without Anna’s preparations back in Potsdam and our skillful helicopter pilot Jonathan. 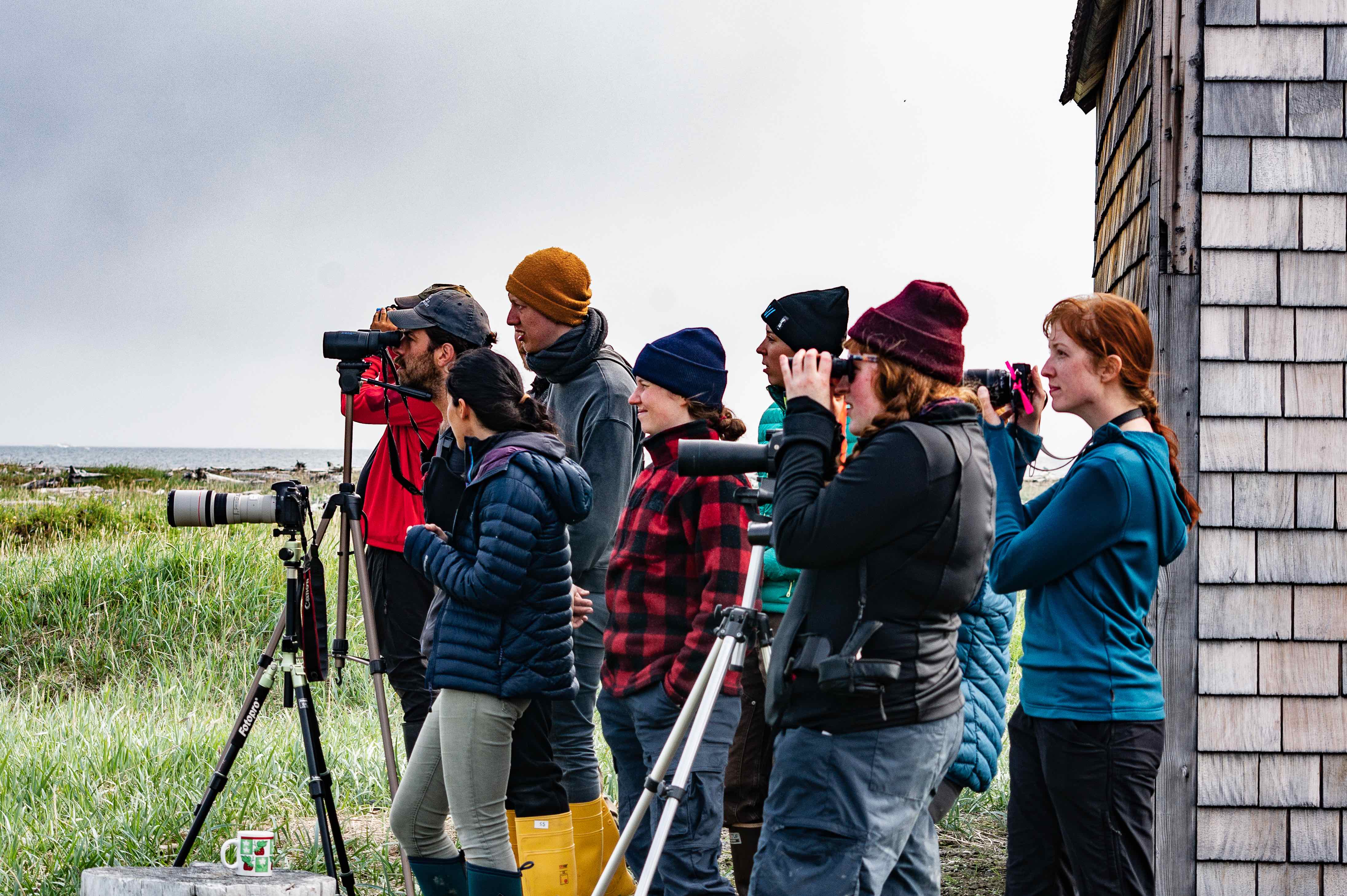 Even though we’ve only been here for one week now, successful field sampling was done basically from day one onwards. The never-ending daylight makes for some pretty awesome “office hours”. In our long-term monitoring sites in the Ice Creek Watershed, Niek, Julia, Alison and Samuel were able to test sample soil pits, practice taking stream water measurements and read out long-term water level and temperature loggers. In the meantime, Léo, Jade and George took offshore seismic lines, surface grab samples and short cores from the coastal sediments and lagoons. The goal: to assess the sediment and carbon dynamics in the coastal waters of the Canadian Beaufort Sea*. Another important interest is the detection and quantification of microplastics in the local environment. After being forced to return to camp because of another polar bear (with two cubs this time), Alison and Frank returned to the monitoring site the next day and made sure that the entire monitoring protocol was completed.

We are experiencing exceptionally high quantities of sea ice around Qikiqtaruk this year. Depending on the wind direction, the ice can be seen (and heard) right off the coast on some days. The ice conditions this year seems special to us, but from the stories told by the elders on the island we learned that this is actually how it used to be. It is likely because of the sea ice conditions this year that we have been so lucky to experience a great variety of wildlife, including the magnificent polar bears. Both sightings were bears that seemed well fed and probably just came to Qikiqtaruk to rest for a little while before going back on the ice to hunt. Aside from excitement we are taking the polar bear visits seriously and are taking the necessary safety and monitoring precautions. This means adapting our scientific plans a little, since the bears roamed straight through our study site at Ice Creek but work will return to normal shortly with continued vigilance. Other wildlife includes snowy owls (6+), grizzly bear (swimming!), seals, bowhead whales, belugas, muskoxen, caribou, peregrine falcons, Arctic-red cross fox, Eider ducks and ducklings, Sandhill cranes (35+), snow buntings, plovers, loons, Guillemots, sand pipers, Lapland longspurs, lemmings, char (mainly for dinner)… yep, it’s a polar paradise up here. 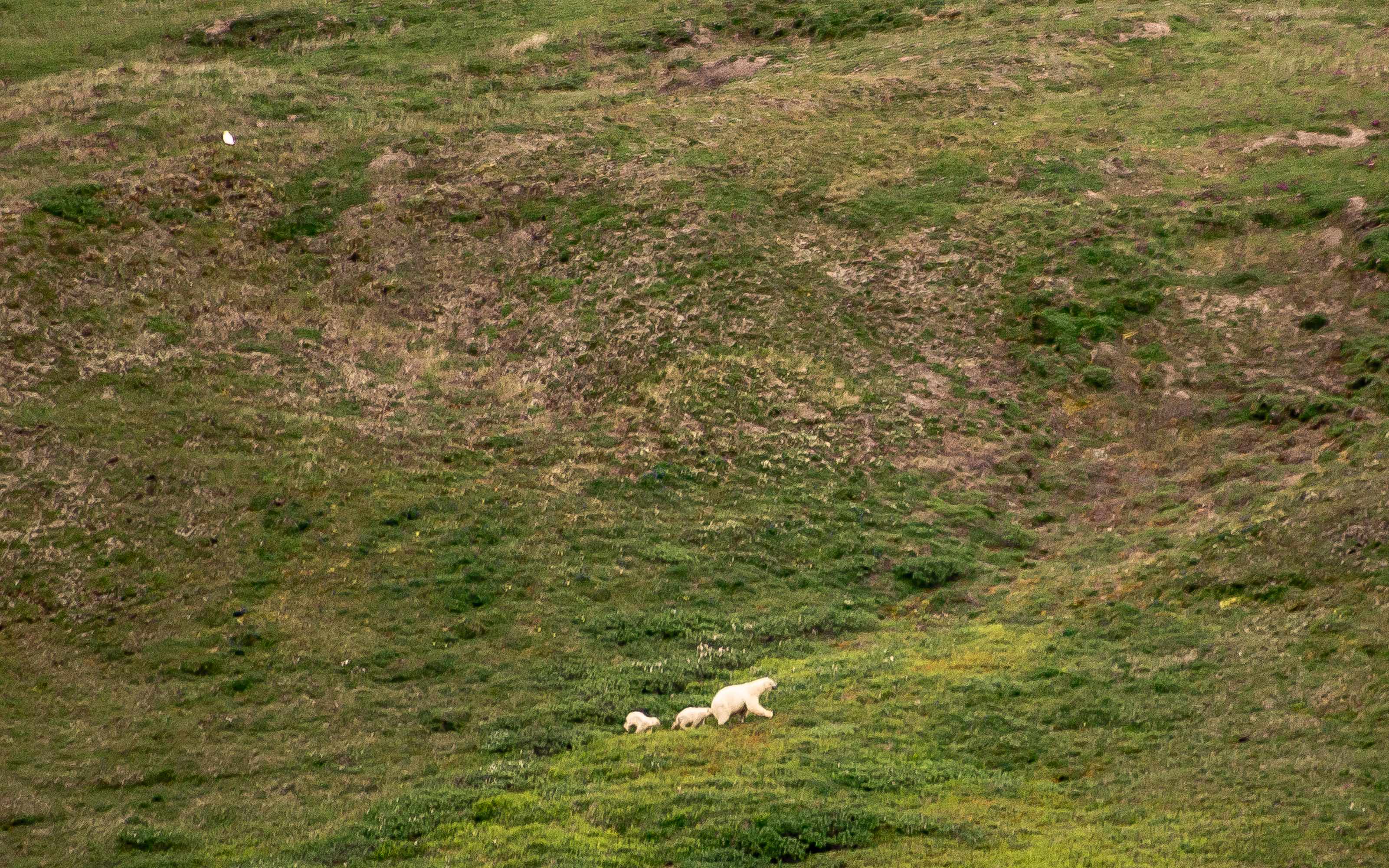 On the last evening before Gonçalo, Pedro, Francois and Jonathan left Qikiqtaruk we had a special event on the program. The whole camp, consisting of our team plus Team Shrub from the University of Edinburgh, the Qikiqtaruk Rangers and the group from the Elders and Youth Program from the Hunters and Trappers Committee of Aklavik gathered for a big feast. Because of the excellent weather, we sat outside all together at a long table. Every party brought food and we ate together and shared stories of why we are here on the beautiful Qikiqtaruk.

The feast made us realize even more that it is not just the enchanting beauty of the Island that makes the experience; a big part of the success consists of the people we share this experience with, the cooperation and team spirit that lives among all of us, and most of all the hospitality of the Inuvialuit and Gwich’n peoples.

*Due to climatic change in the Arctic, many of the permanently frozen soils have started to thaw. This thawing leads to dramatic changes in the landscape. Along the coastlines we observe increased erosion while on the land thaw slumps (mud slides) and thermokarst (sink holes due to disappearing ground ice) disturb the landscape. These disturbances lead to increased transport of soil, directly or through streams and lakes, towards the sea. Along the shores this is clearly visible in form of murky brown coastal waters. Soils contain a lot of carbon, which is partly lost to the atmosphere upon thaw, thereby potentially contributing to global warming. A large part of this carbon is however transported by rivers and streams to the sea. The exact quantity and impact of released soil material to the sea is not yet fully understood in the Arctic and forms the main focus of our combined research efforts. While some of us focus on soils and groundwater in disturbed areas (affected by permafrost thaw) and the transport of soil material to rivers and the sea, others are focused on taking measurements in the marine environment, where the soil material is distributed and partially consumed by marine organisms. In short, increased loss of soils to the sea in the Arctic has a local impact on the ecosystem (including humans) as well as global impacts through the release of greenhouse gases. Our research increases our understanding of the impacts of climate change in the context of coastal Arctic ecosystems and provides highly relevant information to inform policy makers and local communities.