A local seminar on the impacts of climate change and globalization in Disko Bay took place in Ilulissat on April 10-11, 2018. The seminar was arranged with support from the Nordic Council of Ministers and facilitated by Copenhagen University – and led by Senior Research Advisor, Morten Rasch – with a purpose to identify opportunities and threats and established more cooperation between local actors and researchers. An estimate presented by the municipality suggests that more than a hundred researchers pass through Ilulissat each year without much cooperation and inclusion of locally gathered knowledge. One of the objectives of the Nunataryuk project is to enhance cooperation between researchers and local and global stakeholders impacted by current environmental, economic and social change taking place in the region. 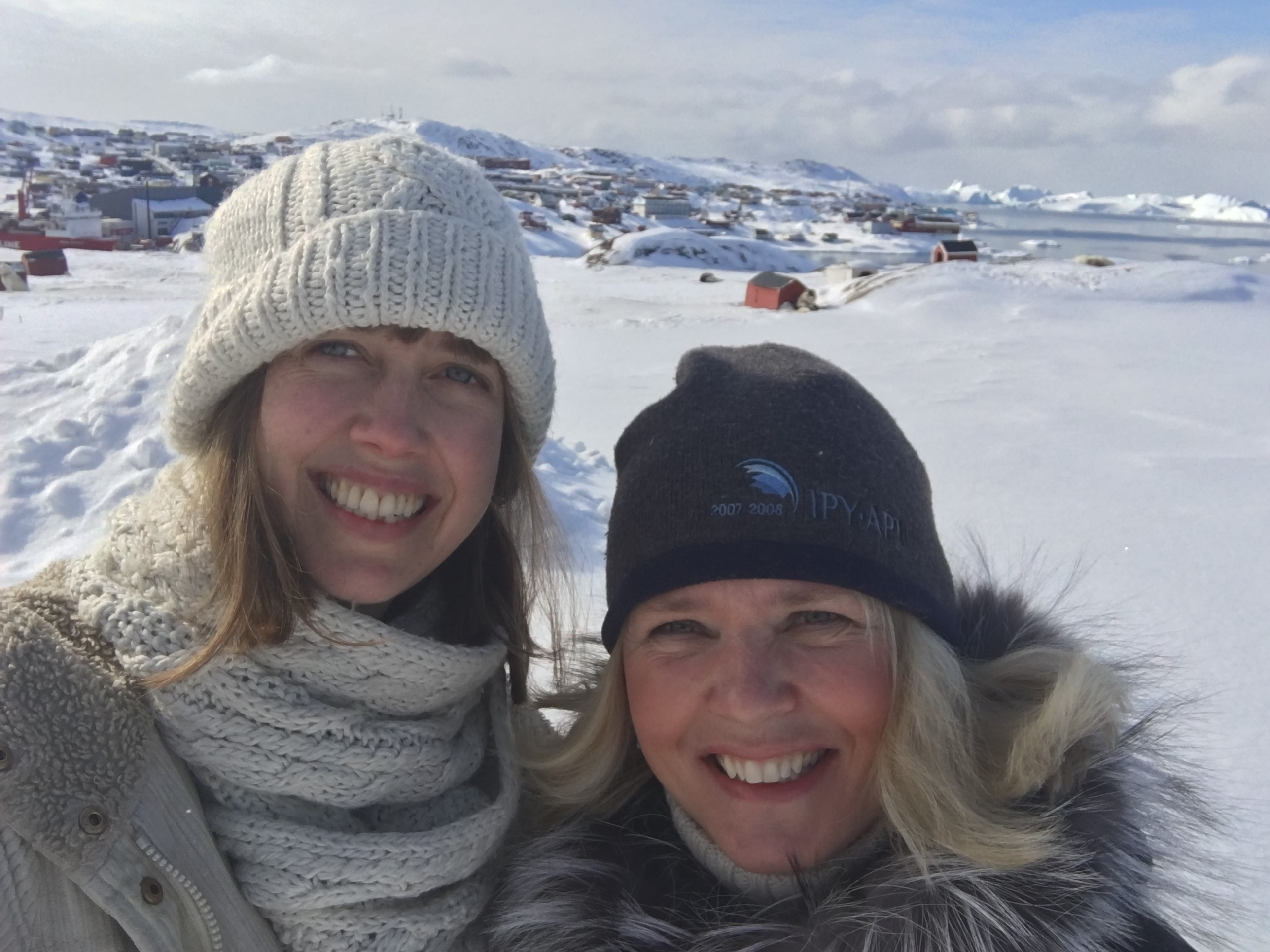 From 2009-2018 Qaatsiutsup municipality was the northern most municipality in Greenland with Ilulissat being the biggest city. A population of about 17.000 people were spread over 5 cities and 21 villages. In the summer 2017 a tsunami washed away two of the villages and the population was evacuated to Uummanaq. It is unlikely they will ever be able to return.
A municipal division of Qaatsiutsup has been in the plans since the time when a majority of the habitants voted in favour of such a division. An agreement went into effect from 1st of January 2018 where Qaatsiupsup was dissolved into Avaanata kommunia and Kommune Qeqertalik.
Avaanaq kommunia means the Northern municipality and includes settlements in the area of Ilulissat, Uummanaq, Upernarvik, and Qaanaq. The municipal board cooperates with local boards and village committees about planning services of general interest, infrastructure, as well as economic and political development in the municipality.

Economic dependence on the living resources

Greenland is culturally connected to and economically highly dependent on the living marine resources. These have ensured the survival of the Inuit people for more than 4000 years and today they comprise about 96 pct. of Greenland’s export. This includes shrimps, Greenlandic halibut, cod, mackerel, lumpfish roe and other fish.
Over the past several decades in particular Greenlandic halibut has been important for the local economy in the Disko Bay area. However, due to issues surrounding insecurity about the Greenlandic halibut fish stock, the quota was underutilized. Currently, the municipality is considering possible test fishing for new species in fjords where they have not been active earlier. Aside from Greenlandic halibut, shrimp and different seals and whales are of importance. The same goes for cod which is a fish species now returning after decades of being largely absent from the Disko Bay region.
There are also reindeer herds living in the area, which along with different types of summer birds are being hunted. Some species are on the preservation list. The birds migrate to the area, builds their nests to hatch the eggs, find food for the young birds before leaving again in the fall. Among the protected species are Eider and Lomvie birds, where hunting has been prohibited the last 10 years. Local observers argue that these birds have multiplied to a degree where the polar foxes are coming to the area just to eat the eggs, while being a danger to humans. Suggestions have therefore been made to abolish their preservation.
A general challenge linked to the use of the living resources is the significant youth drop-out –approximately 50 pct. – from upper secondary youth education and the generally low share of the population with vocational education or other professional training. Many join the fishing industry and seem satisfied in this sector. But with the increasing rate of atomization of jobs in this sector this is a future challenge. 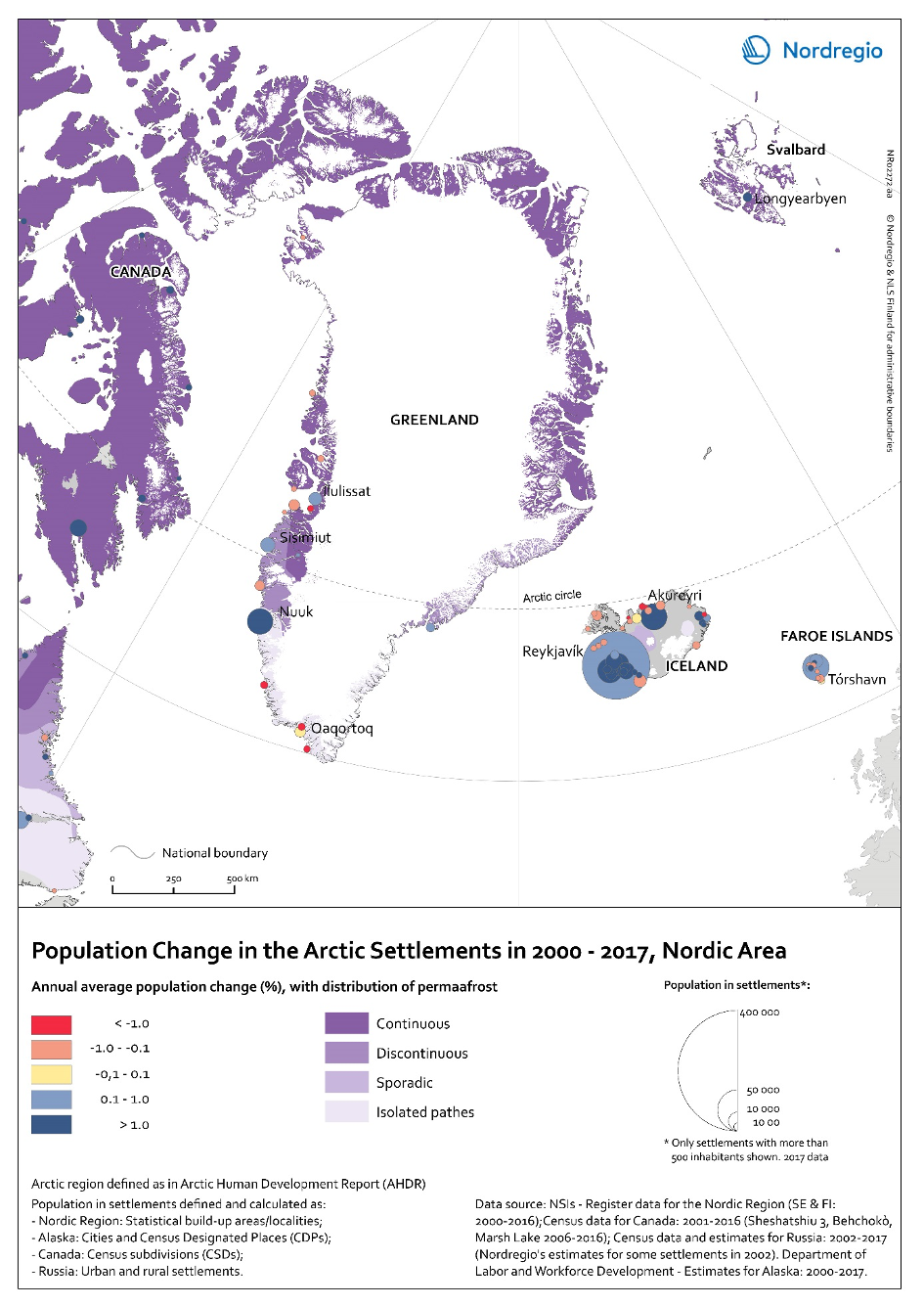 Life in a village in Disko Bay

The village Akuunaaq is primarily accessed by travels by boat or by dogsledding, both of which are important for village well-being, and both of which are impacted by climate conditions. Because of thin sea ice in the winter many people have had to stop with dog-sledding and this also has complicated or hindered hunting and fish, seal, whale catches. The habitants in the village have been more or less trapped and unable to engage in activities as they usually did because of the risk of falling through the ice. Still, the sea-ice were too thick to use the boats to sail in the region. Therefore, it is disappointing how few fish and other catches have been traded, and currently it is only few people who manage to make an income in these pursuits.
The village has a population of approximately 80 habitants, including 10 primary school students. It is an ongoing challenge to recruit teachers to the local school. As students turn 14 years old they move to a student boarding house in the closest bigger town to continue education. The village experiences the same trend as described elsewhere in the Arctic where young people are leaving without returning after completed education. The common explanation of this phenomenon is a general lack of education and employment opportunities locally.
The village is discussing different options about the future including how they could get Royal Greenland to establish a small production plant to process local fish caches. Currently, the village fishermen sail to the nearest city, Asiaat, to sell their raw fish. People in the village has lately observed stronger sea currents and a more frequently changing direction of that current.

Ilulissat is one of the most developed tourist destinations in the Greenland due in part to the UNESCO world heritage status of the ice fjord. Ideally, this can bring development to the whole municipality by introducing more boat connections and lodging options in other towns and villages up along the coast. Many villagers are interested in establishing places for tourists to come and stay for a couple of days as supplementary income to fishing and seal and whale hunting. The registered ‘overnight-stays’ was 6312 in 2000 and 27.925 in 2016 which is an increase on 342 pct. With a new airport being planned it is likely that even more people will visit the region in the future.
New plans are also being developed to prolong the season and winter and northern light tourism. DTU (Danish Technical University) has introduced ideas on how technology can be used in new ways to enhance the experience of the northern lights. The construction of a Northern lights observatory has been planned with construction scheduled to begin in 2018-2019. Related to this, the municipality is looking at questions such as “how can Greenland compete with other currently popular northern lights tourist destinations such as Iceland and Northern Scandinavia?”. In this context, to display the uniqueness of Disko Bay region it is highly relevant to develop the tourism sector in cooperation with the people living in the region.
Fewer people in the area go dog-sledding compared to earlier. Today, snowmobiling is very popular, and being able to operate a snowmobile is required to be able to obtain a permit to use a snowmobile with tourists. Currently, the municipal board is in dialogue with the village committee about the possible introduction of local regulations to strengthen the dogsledding business as this also represents an important cultural heritage for Greenlandic society.
Another ongoing discussion is the question of how to balance the current urban development of Ilulissat while preserving the experience of raw nature which in this area is what most tourist express a high appreciation for. Of importance to Avaanata will be to learn from the Icelandic experience and avoid the negative consequences of mass-tourism that are likely to occur in small localities such as those in the Disko Bay area. Part of a strategy will be to target high-paying tourists seeking exclusive experiences.

Future projects in the area

When a new international airport has been built it will connect Ilulissat to cities like London and New York directly with a 4-5 hours flight. Furthermore, a new plan to expand the city of Ilulissat to include new neighbourhoods with new dwellings, roads, and business areas has been prepared.
An educated workforce will be needed to support local sustainable development. Today, the municipality is lacking such a workforce and a general challenge is the persistent mismatch between local competences and skills required, leading to a situation where there can be unemployment and vacancies at the same time.