We (Joan Nymand Larsen, Jón Haukur Ingimundarson, Thomas Ingeman – Nielsen, Arja Rautio, Ulla Timlin, Olga Povoroznyuk, Peter Schweitzer and me, Susanna Gartler) have just arrived at Kangerlussuaq airport and are sitting in the café waiting for our flight to depart. One of the beautiful red Air Greenland planes is departing for Ilulissat. But it is not ours, because this one is making a stopover at a different community before arriving. 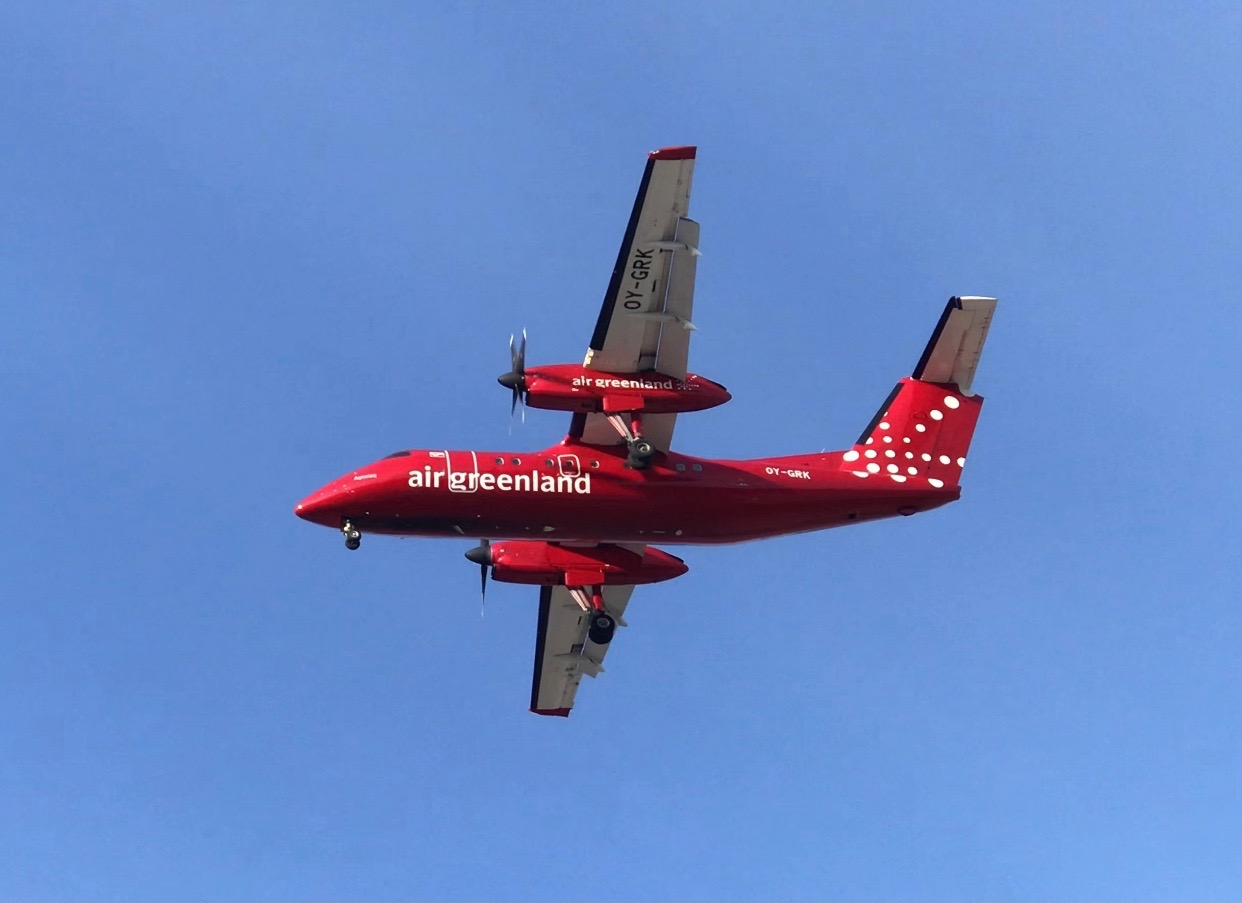 Our flight is scheduled to depart 15 minutes later. I should have known to knock on wood when Thomas said travelling with him means always a delay: When we go to the gate we get told that there are some „technical issues“ and that we cannot take off.

Well, now it seems that we are stranded at Kangerlussuaq airport, Greenland’s busiest air travel hub. The airstrip was built as a US military facility during WW2. Today it is a community of approx. 200 people, and currently it is the only civil airport in Greenland with transatlantic connections. However, two more are currently being built, one in Nuuk – with its notoriously bad weather – and the other one in Ilulissat, home of the famous Icefjord and our fieldwork destination for this week. People are divided around the new airports however, Thomas explains, because no one knows how it will affect prices and change domestic connections. It is still unsure whether we might have to stay for the night or if we will be able to join the rest of our team who are already waiting for us in Ilulissat. While we wait, we go for a little tour around the airport and promptly discover one of Greenland’s oldest Permafrost measuring station! Granted, it doesn’t look like much nowadays, more like an outhouse turned in to a discarded cat shelter. But a historic site for our group of permafrost researchers nonetheless. 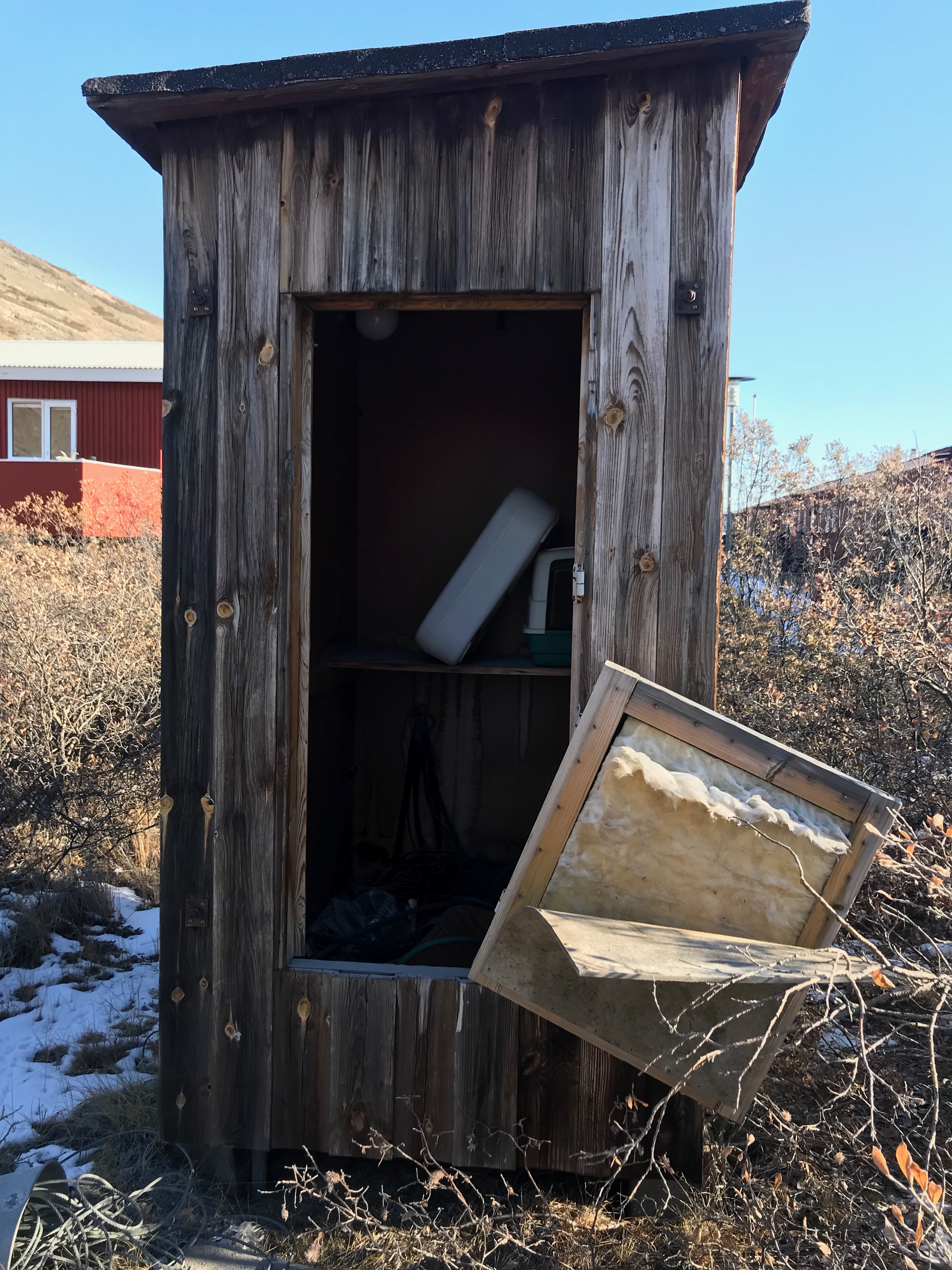 A couple of hours later, lunch and coffee in our bellies, we are able to board a machine and take off along the beautiful west coast, heading North. Underneath us fjords, snow-dusted mountains, and lakes which are starting to freeze. Thawing water on top of the still thin ice sheets create tracks on the lakes, as if enormous snakes slither across them. No, the friendly passenger beside me informs us, this is not Loch Nessie’s offspring at work. 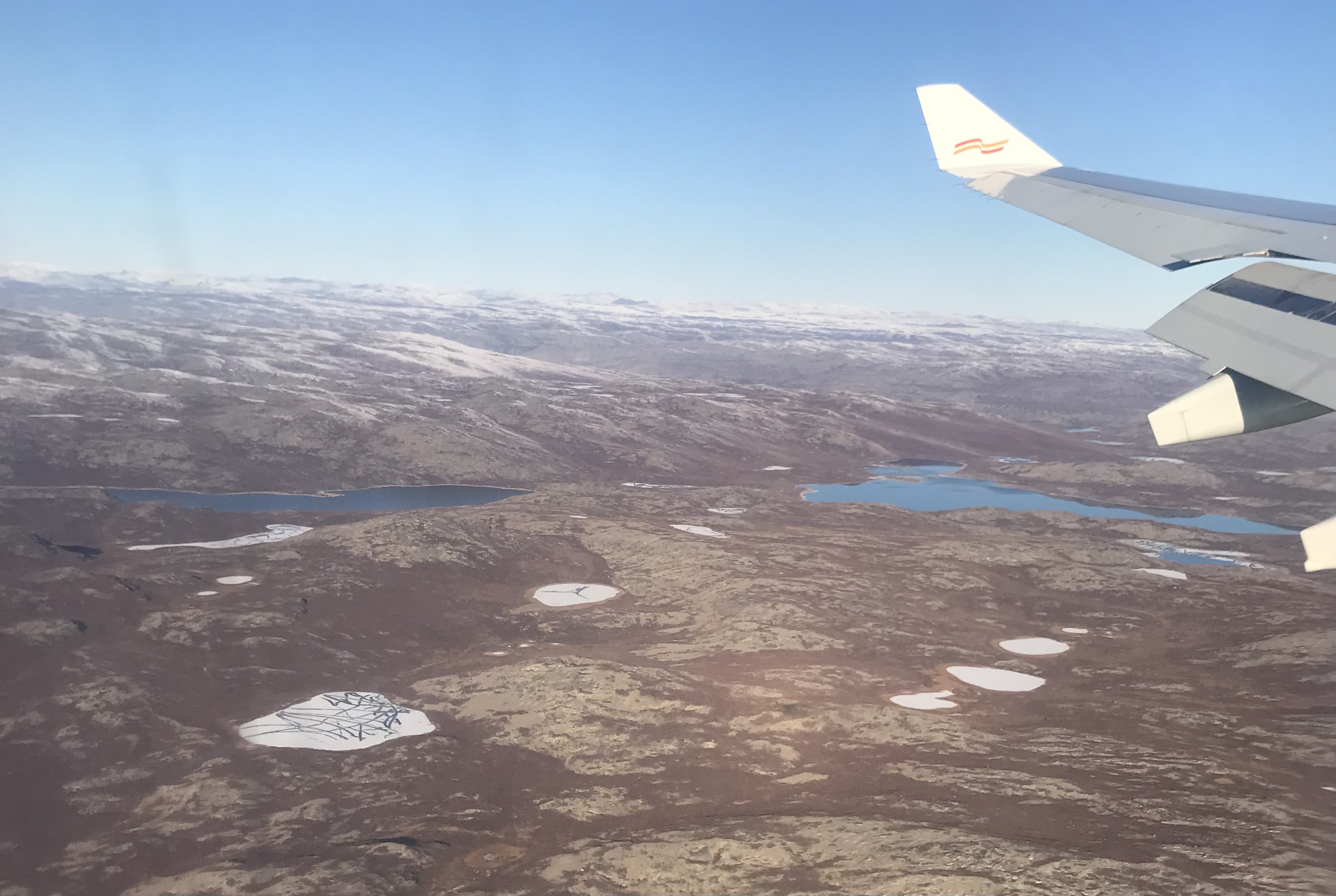 The lady sitting next to me was born and raised in Ilulissat and is the perfect conversation partner for the short 45-minute flight. We chat about this and that, the hunting season, if the berry season is still on (no, because it has been exceptionally cold already during the past few weeks, so the berries are not tasty anymore), Greenland’s national flower (violet color, blooms in May), polar bears (only in the North and East - phew!) – and of course, permafrost thaw: “Well, the Ground is getting softer. And this is causing all sorts of problems. Like houses that have to be abandoned and roads that are getting harder to maintain and becoming a challenge to drive”, she tells. Some of it may be bad engineering too, she concedes, but the softening of the ground certainly doesn’t help. 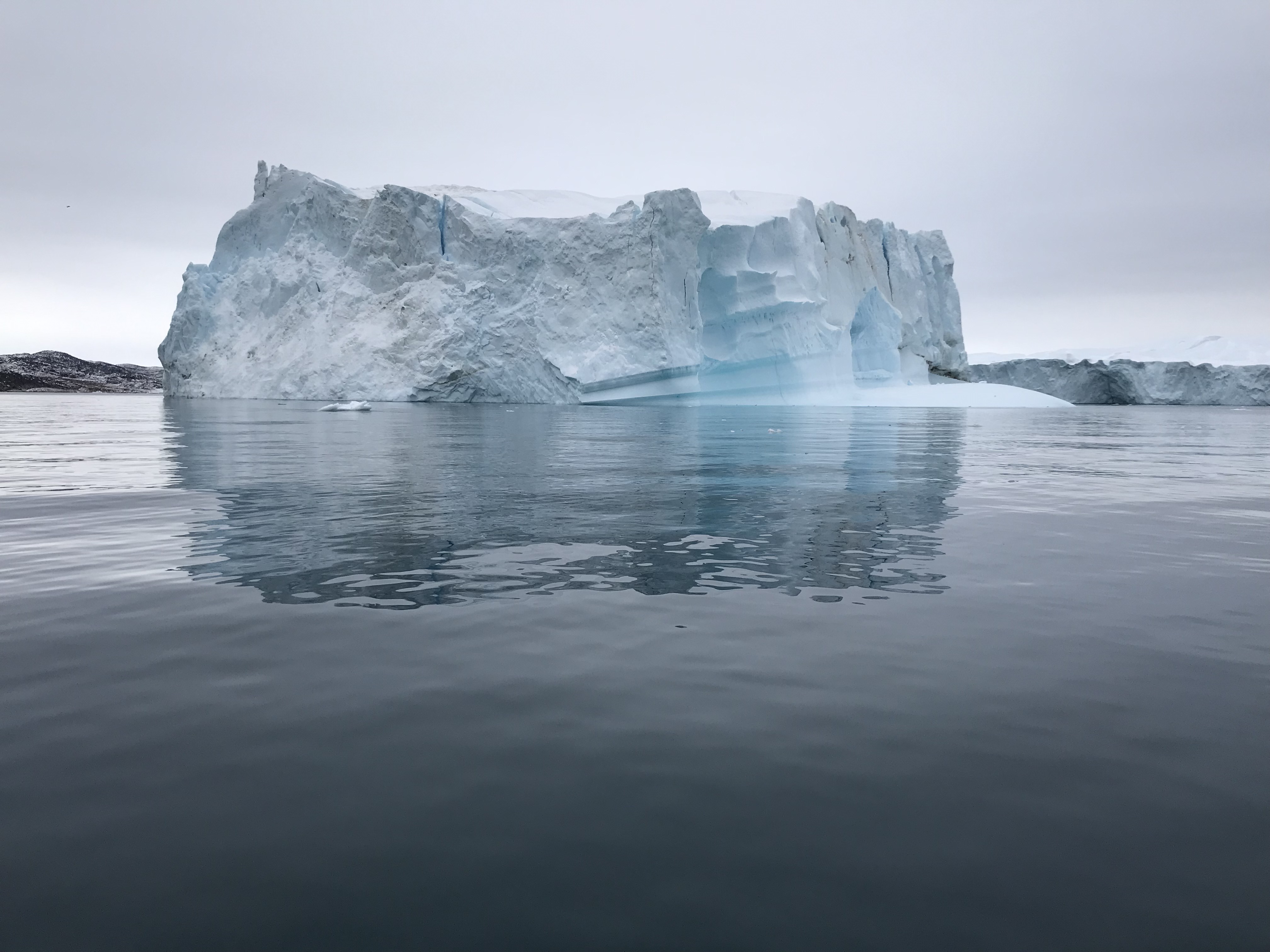 When we land, I cannot help myself but be awestruck. Ilulissat, which means icebergs in Greenlandic, start greeting us already twenty minutes before we touch the tarmac. Like majestic creatures they sit there, still and seemingly unmoving in the oceanic waters, preparing for their journey down south. I once saw one of them in a bay just outside St. John’s in Newfoundland. Who knows, it might have well been birthed right here before getting stuck in Canada and being harvested for its 30-thousand-year-old ice. They use it for beer brewing there, or sometimes people would just go out and get some ice for their evening drinks. Others again prefer climbing these imposing elemental Infra-structures. However, Thomas instructs me, they like to roll over from time to time, causing little Tsunamis in Disco Bay (or wherever they choose to get their exercise done). Revolving ice-mountains – “Berg” is actually a German word for mountain, in case you didn’t know – are also the reason why one should be careful going swimming around here. Well, then my colleague Ulla and I will have to watch out, I say. We are planning on a short dip if time allows. 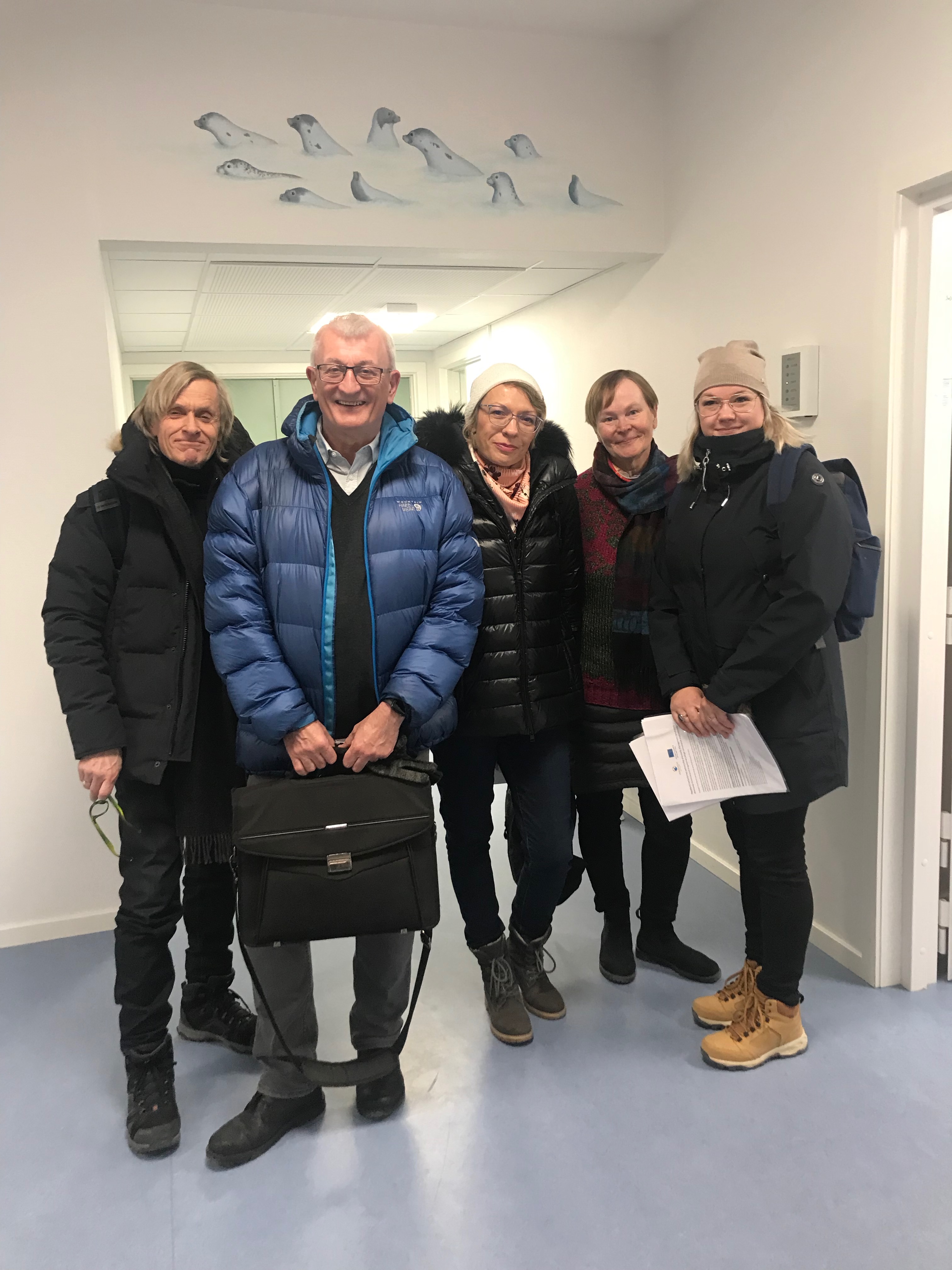 Arriving at the hotel, we are rewarded by a breathtaking view. From our balconies we can see all the way to where the ancient glaciers' ice ever-so-slowly pushes into the open ocean. After a short break, we meet up with the rest of our team at a restaurant called Iluliaq (Iceberg, singular) in town to discuss tomorrows’ activities. We are preparing for the planned open community meeting on risks associated with permafrost thaw that is scheduled for the next day. Joan, Jón, Arja and Ulla have been meeting with locals all day and inviting as many as possible to join our upcoming public meeting, to add to those already invited. In a town of approx. 3000 people polishing door knobs can be a very effective way to reach out to people. On my way there I take a couple of pictures from the harbour, with its many fisher- and sightseeing boats, including the Royal Greenland fish processing plant and larger circular Polaroil tanks that stick out on the shorefront. 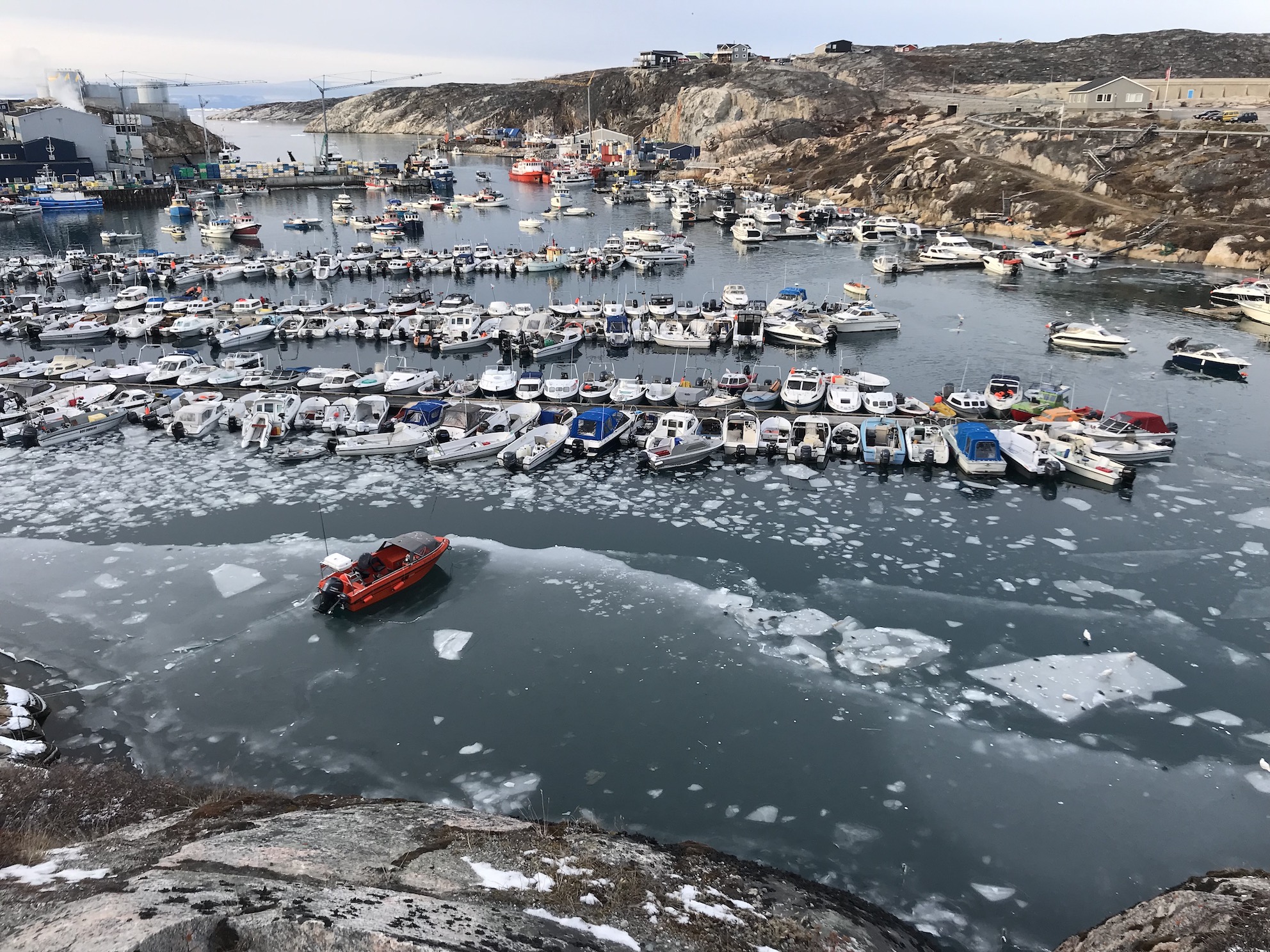 Geographically speaking, in Greenland we are already on the North American shield, close to North America, which is also called “Turtle Island” by some of its indigenous inhabitants. Technically it would only be a short flight to Ottawa, for example. However, flights to Canada were cancelled a few years ago. At the moment, this place is most easily reached via Iceland and Copenhagen, speaking much more to its political and colonial history than to its physical location. 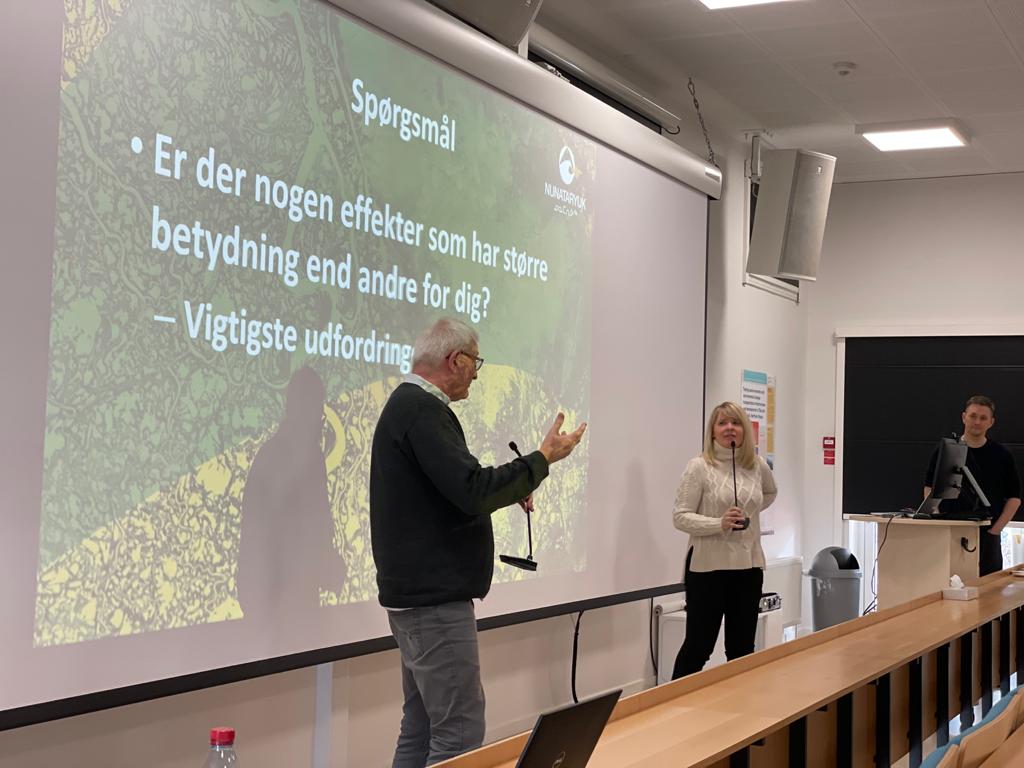 There are no Turtles here, but many other critters, which are depicted on the walls of the SPS: the Social Pedagogic Center where we are holding a community meeting/ risk workshop today. In the morning we visited the harbour, fishermen and women going about their daily business catching and processing halibut and prawns. These get exported to the rest of the world. We invite as many people as we can, at 2 pm several of them show up to our event. 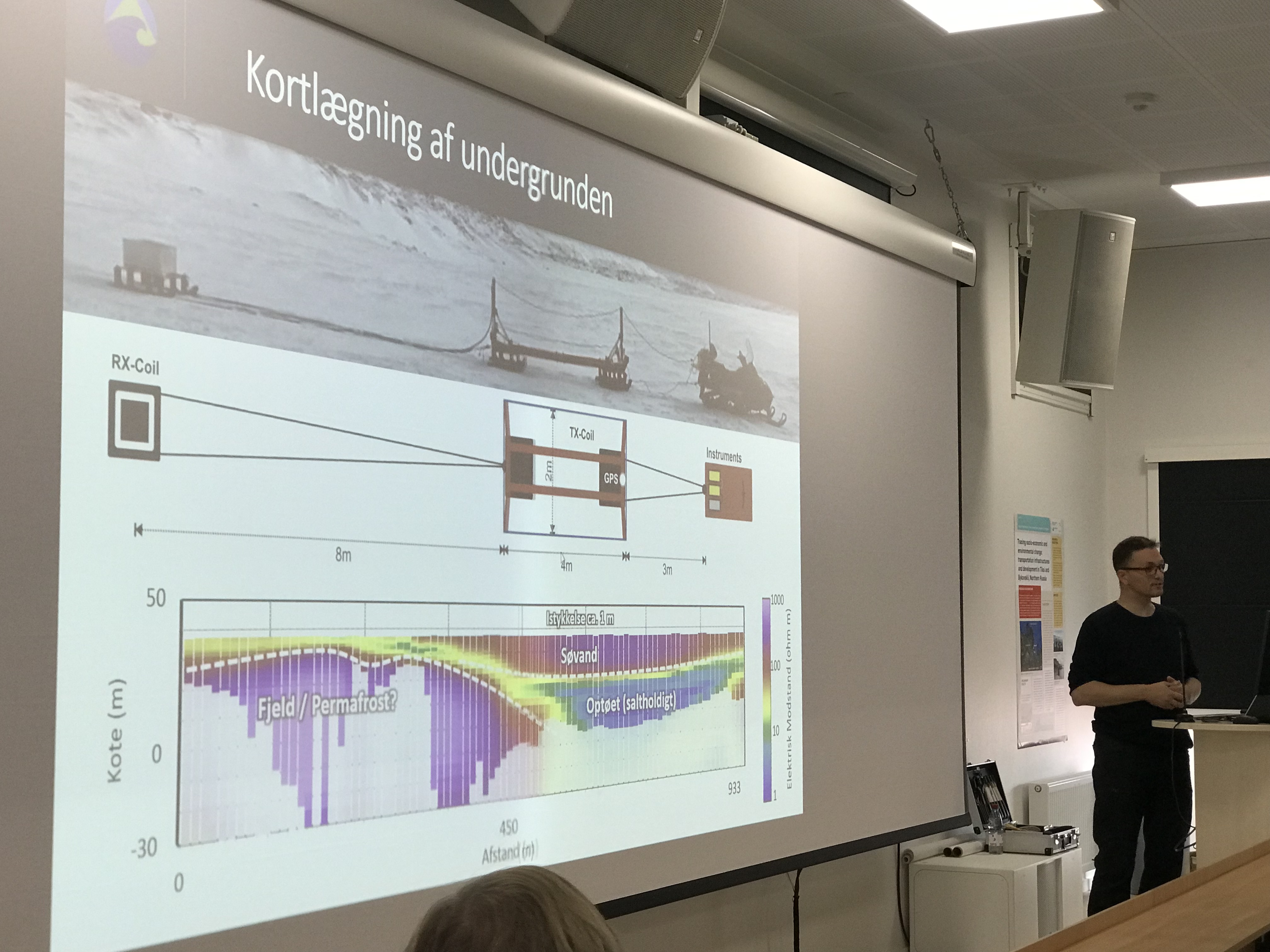 Some engage very actively in the discussion and we get good results. We are asking: What are the local perceptions of permafrost thaw? Our previous findings are confirmed, that while it is not a major concern, neither for health or infrastructure for example, people do know about the issues and are a bit concerned about for example potholes and houses. However, attendees agree that people are generally used to adapt to changes. 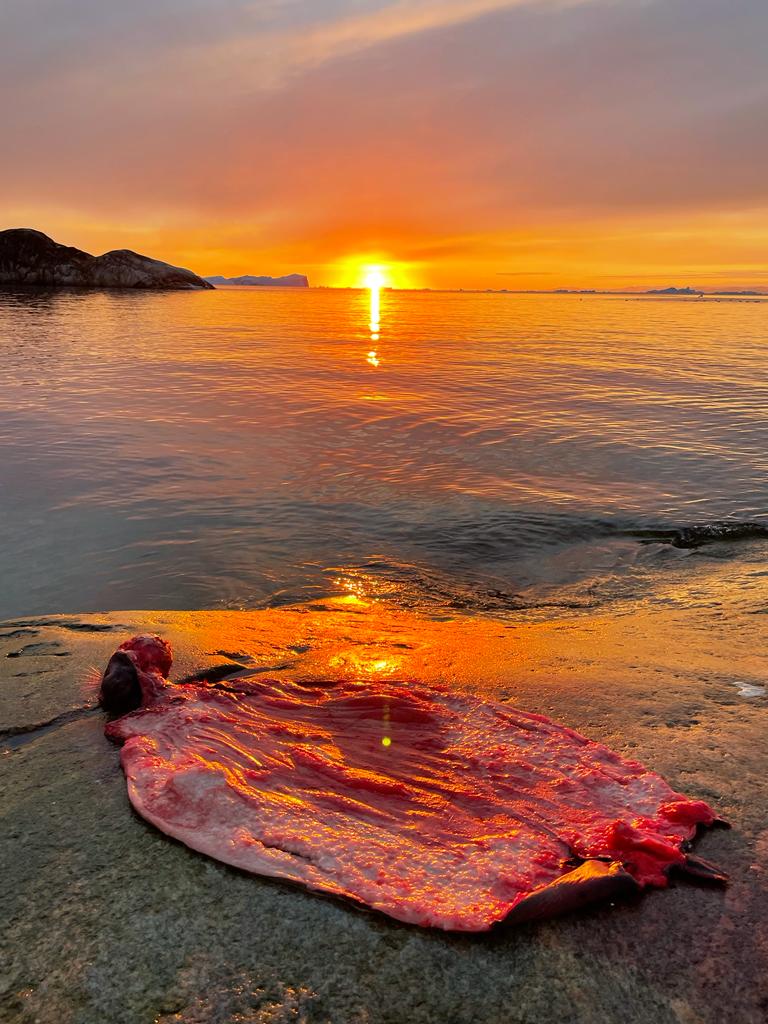 In the course of the day, we set up more interviews and visits for the upcoming days. Just as the evening sets in, we explore a ravishing sunset at the shore and find a seal skin on the shore. Later on, during the week a worker at the water and electricity facilities in town will tell us that as the ground does not remain permanently frozen anymore, this creates problems for people who need to process seal skins on frozen ground. Seals and seal skin products are an important part of peoples’ livelihoods in this area of the Arctic. The day is topped off with a snow crab and fried halibut at the hotel Arctic, overlooking sparkling Ilulissat by night. Accompanying the local delicacies is a bottle of „Greenlandic champagne”, the astonishingly good local water. 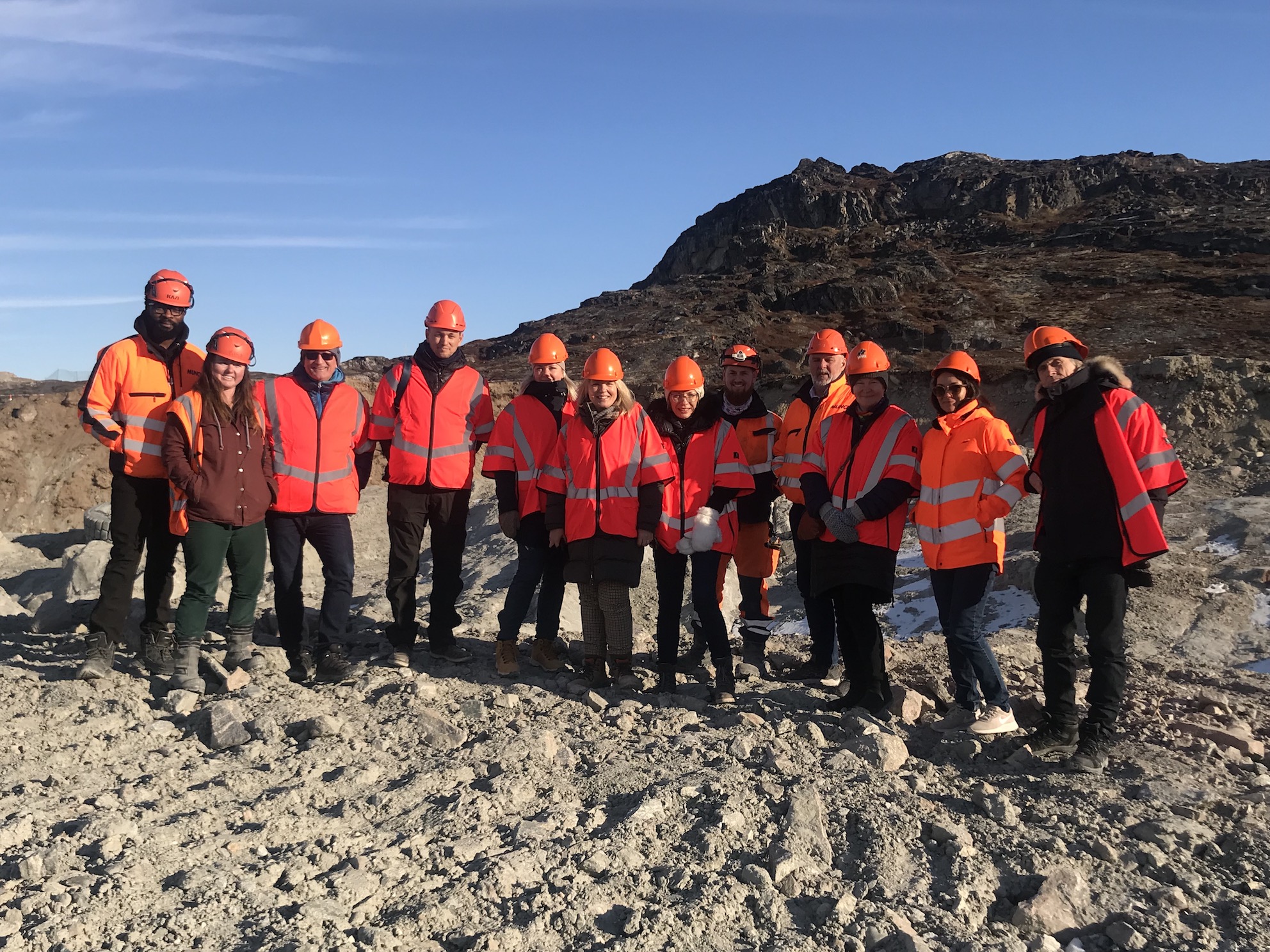 The following day we visit the airport construction contractor, called Munck, whose manager kindly invited our group on a tour around the site. Permafrost sure causes problems there, since it so hard it can be mistaken for bedrock sometimes. Yet, they still need to find all permafrost pockets, excavate the material and fill it back up with blasted boulders to make sure the constructions that will be built on top will not be affected by thawing of the active layer. The process creates big holes which turn into safety issues for workers and infringing on hiking and dog-sledding paths in the area. Given the peculiar consistency of permafrost it is easier to work with when frozen as opposed to in its sloppy thawed state. 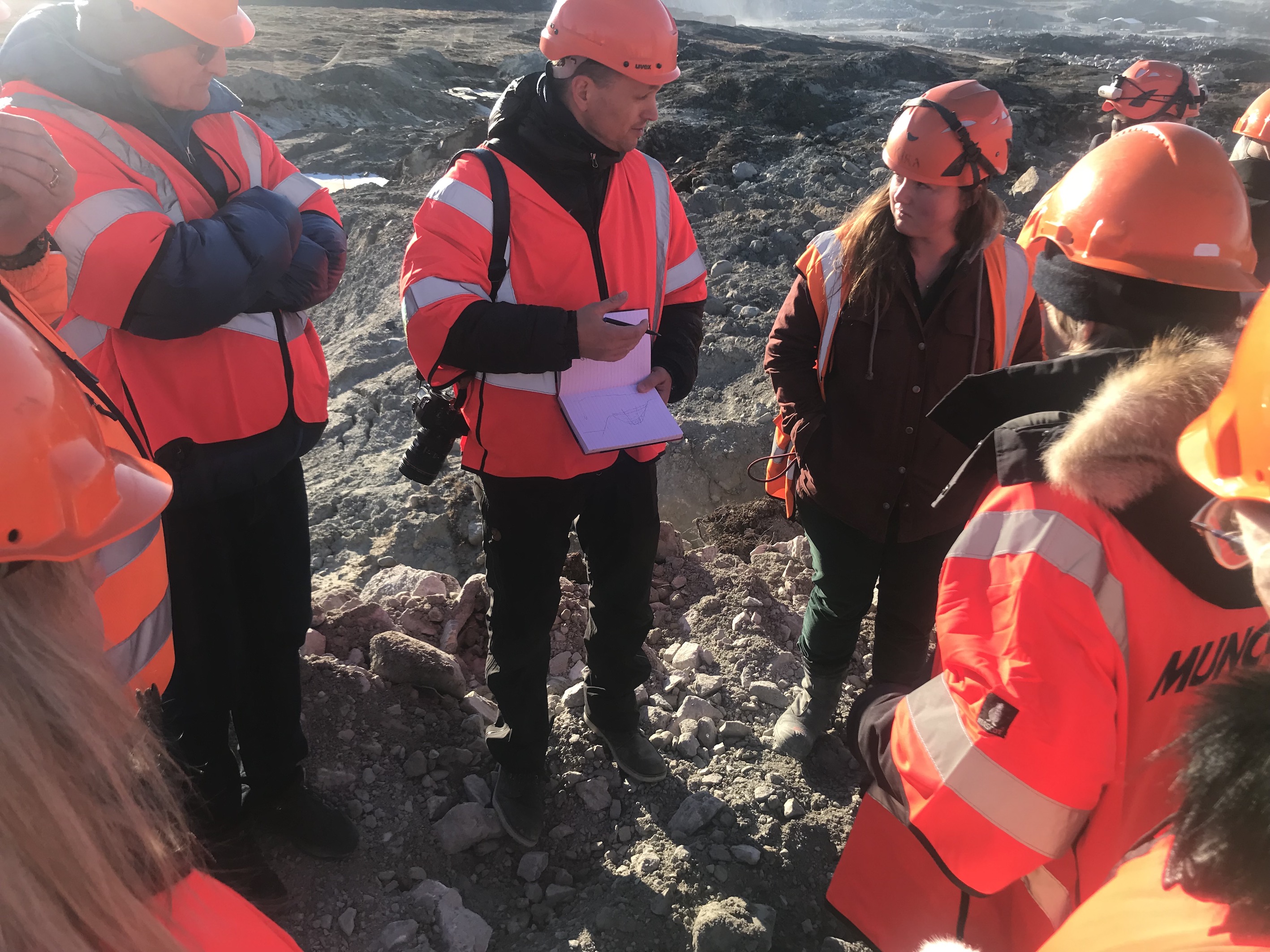 In the afternoon some of us visit local schools to get a better understanding of education, schooling and mental health in the region and how it is linked to climate change including permafrost thaw. 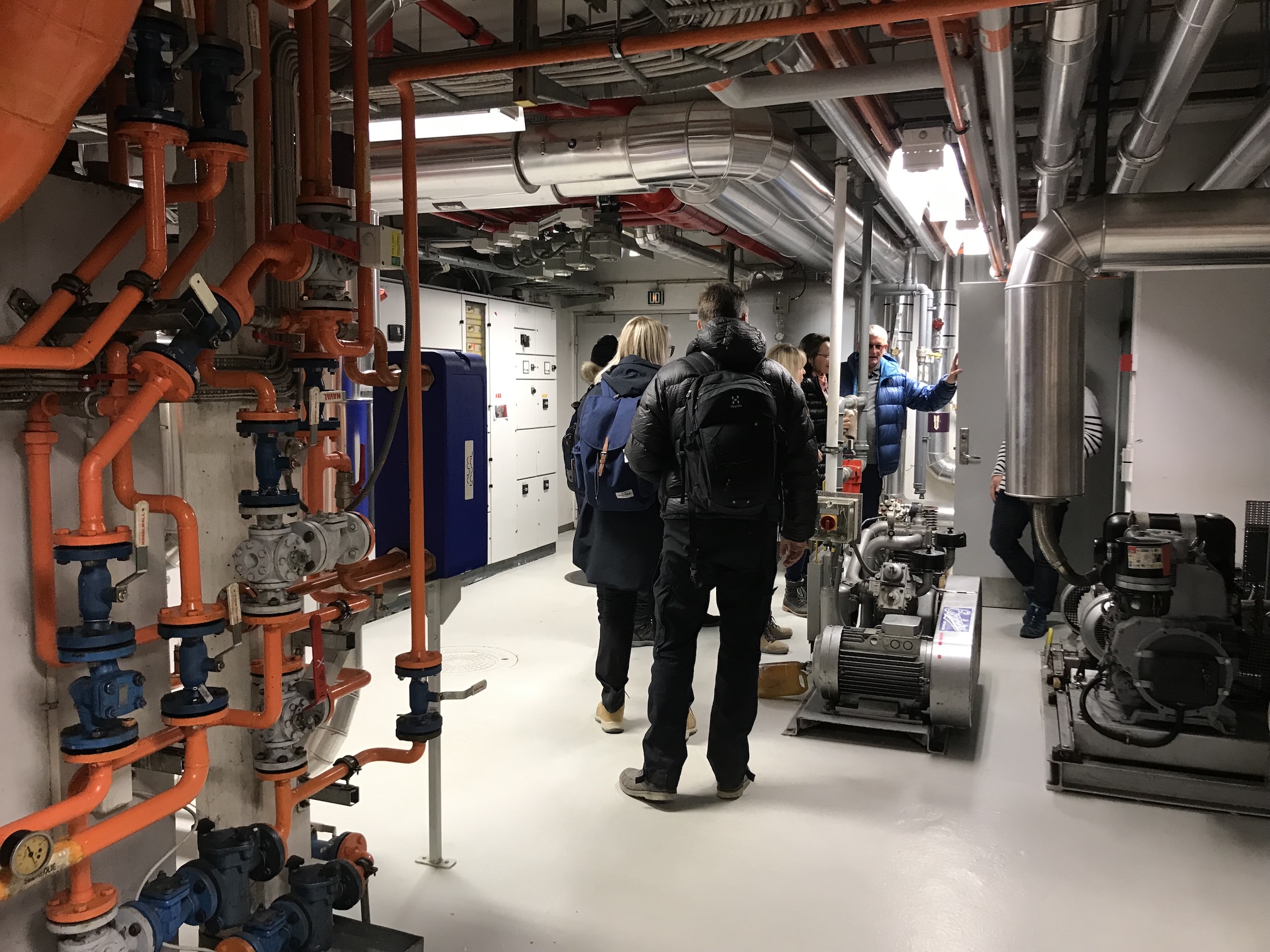 Friday starts with a collective breakfast with workers and managers at the water and electricity department at the outskirts of town, after which we walk back towards the city center.

Along the way, Thomas checks the foundation of the court building for damages caused by permafrost thaw. The afternoon is filled with meetings with representatives from the municipality as well as locals that cover the diverse topics of the multidisciplinary research team. The most visible result of climate change is the fact that there hasn’t been any ice seen on the ocean since 1993 in this area, we hear from a local. Only few houses sit on permafrost and while they are sinking, it is not a cause of major concern for the local population. 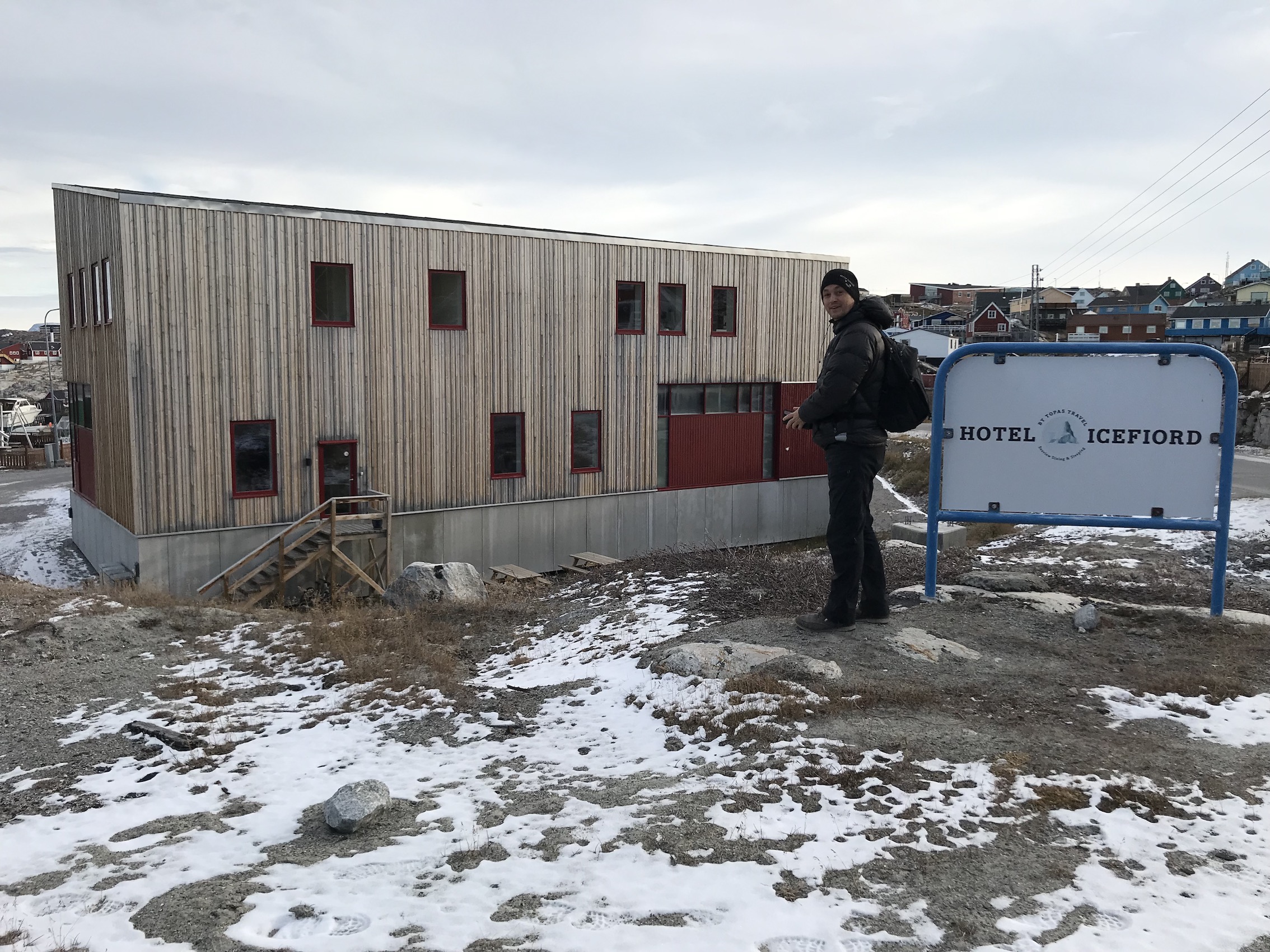 In the afternoon we visit the harbour with its huge fish and shrimp processing facility, operated by Royal Greenland. As the largest shrimp producer worldwide, this fantastic sea creature is exported to many different areas around the world, including the United States, Japan and Italy. 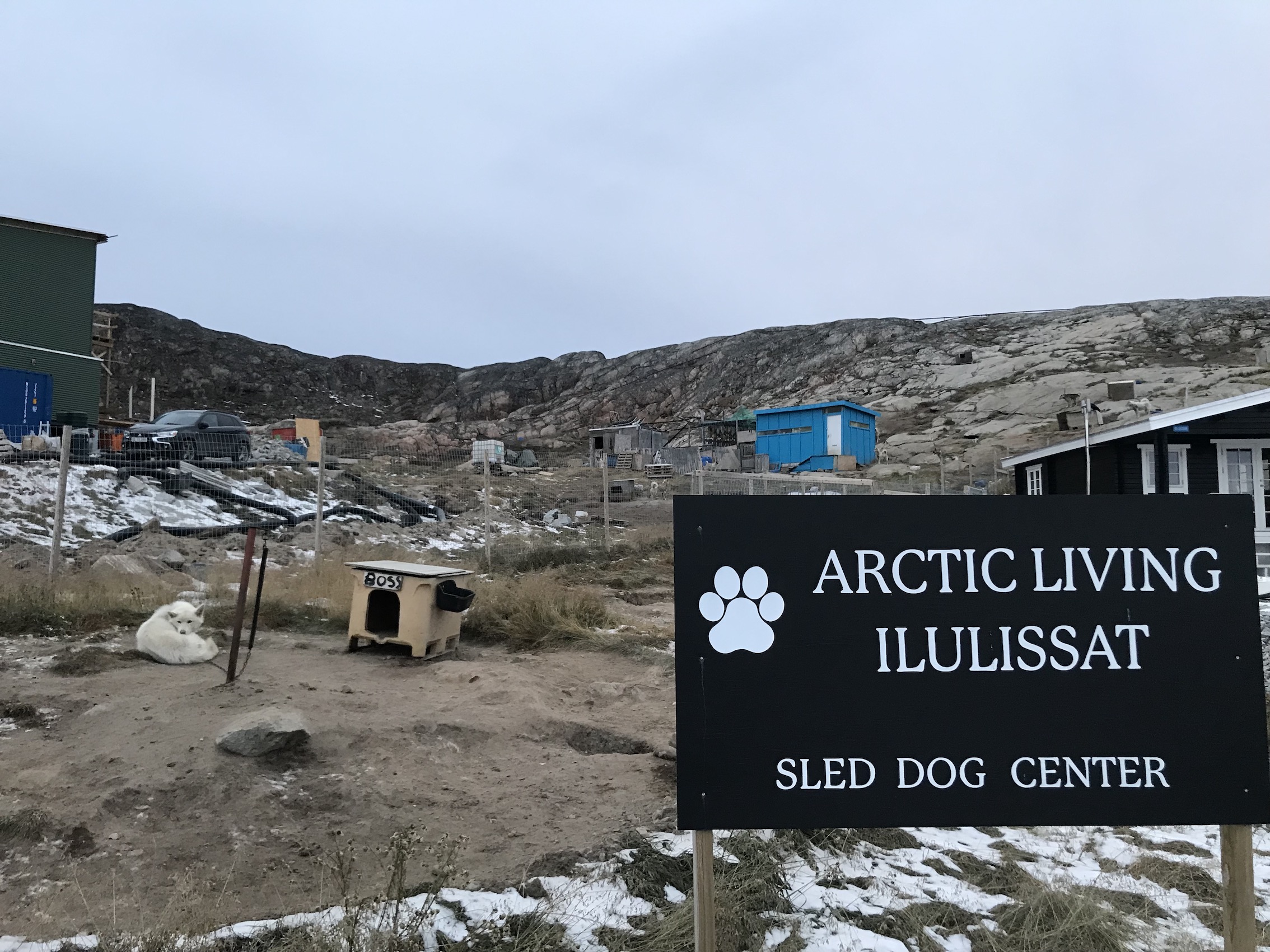 In the evening we walk to the area where most of the towns’ sled dogs live. Using sled-dogs both for travel, foraging, recreational and touristic use depends not only on enough snow cover but also on permanently frozen ground. 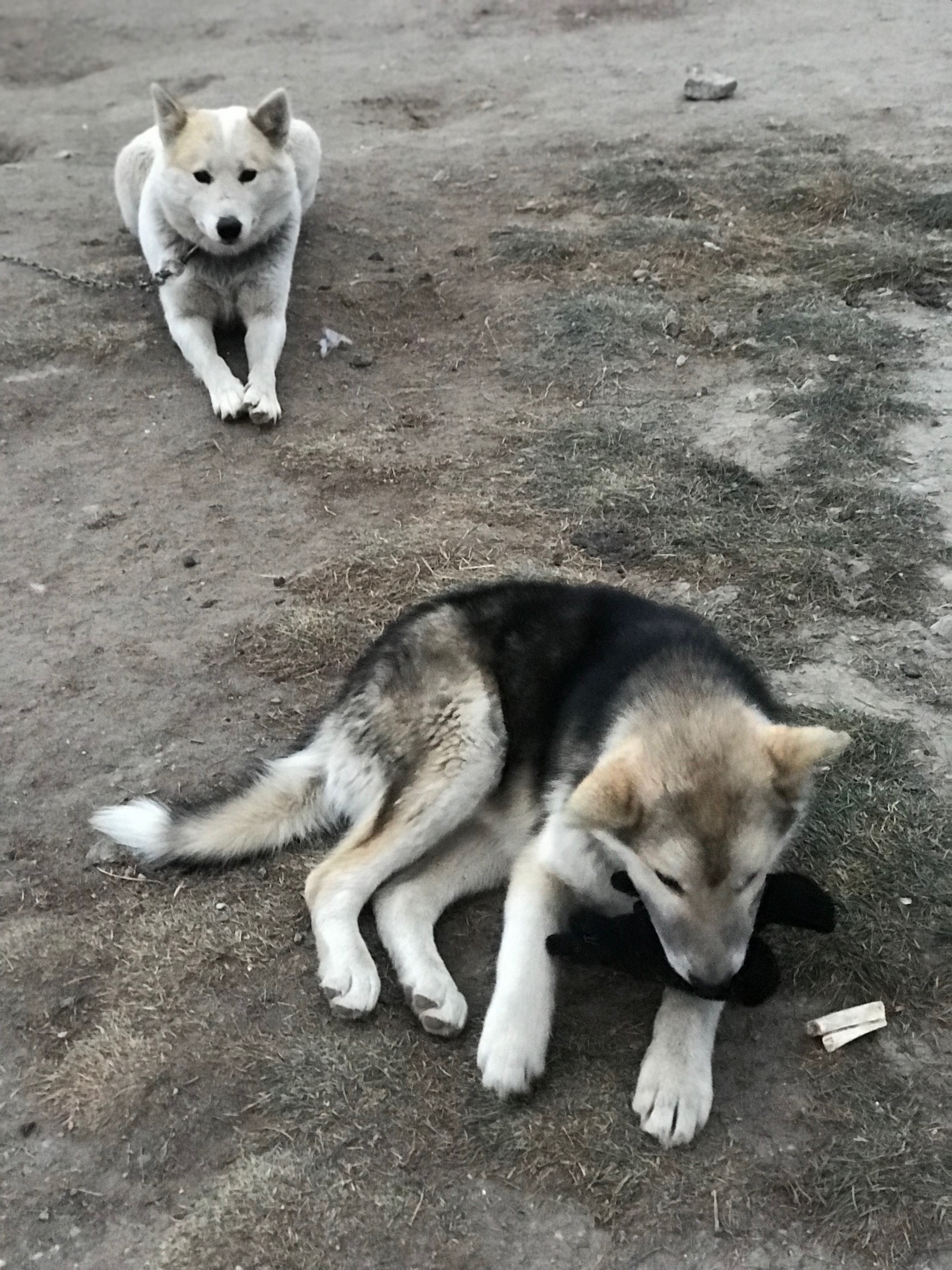 Saturday is filled with informal conversations in town, more interviews at a local café and a visit to the Icefjord Center at the UNESCO Heritage Site. 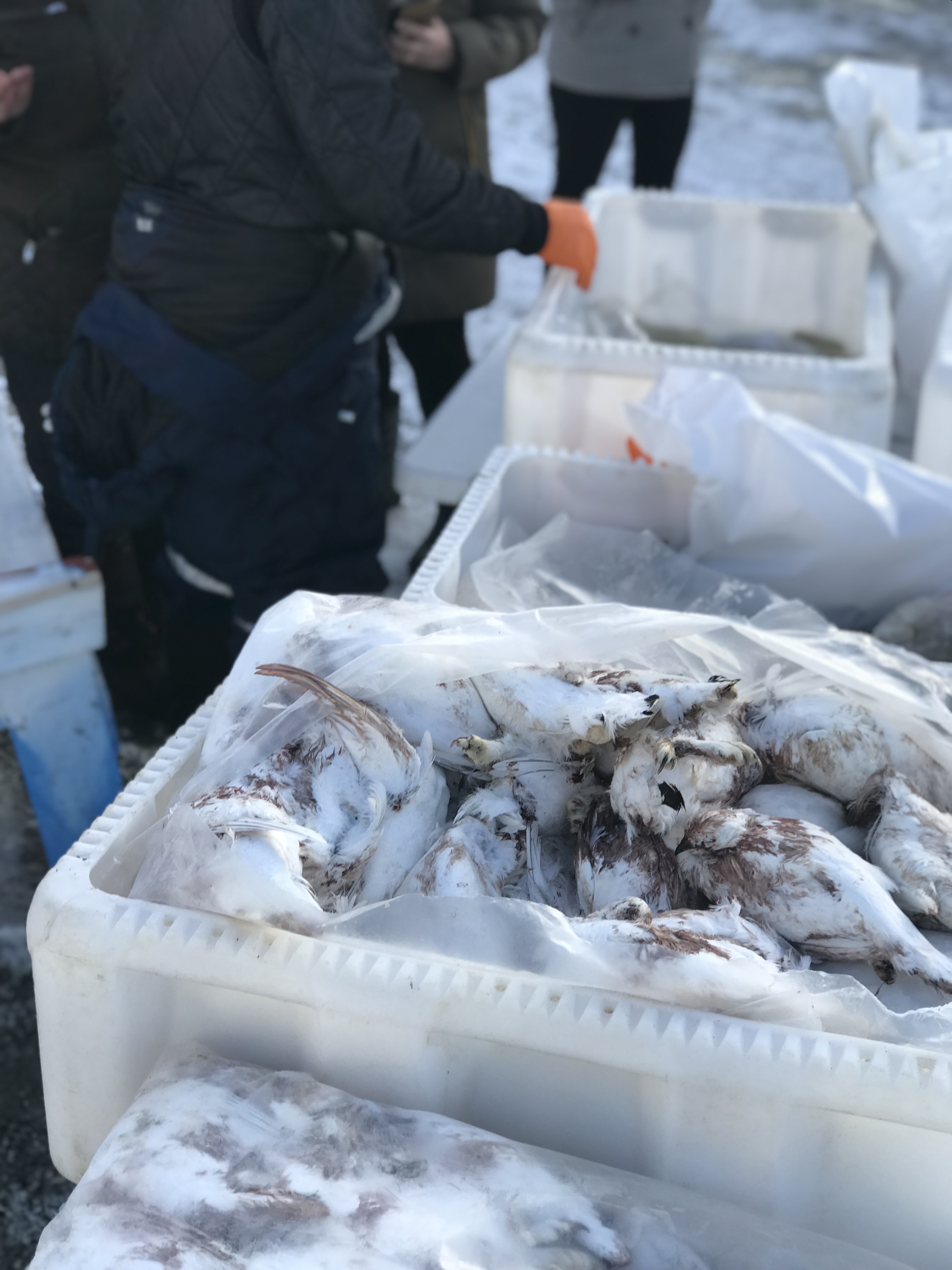 Finally, our trip is topped off with a boat tour through the Ilulissat Icefjord on Sunday. 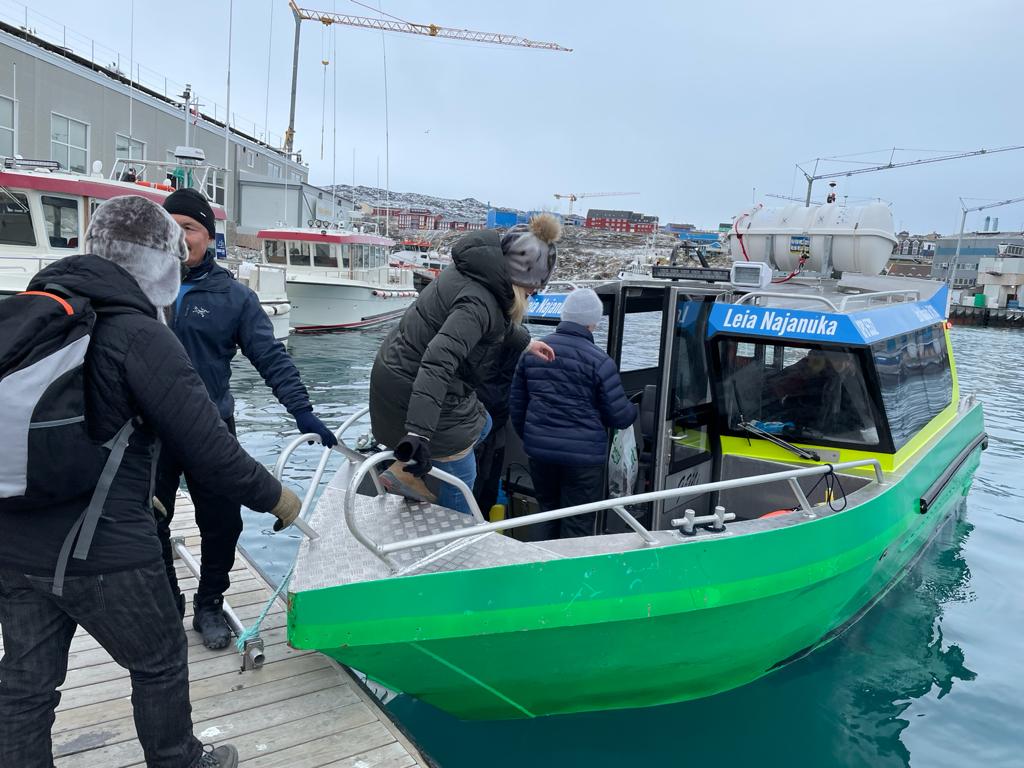 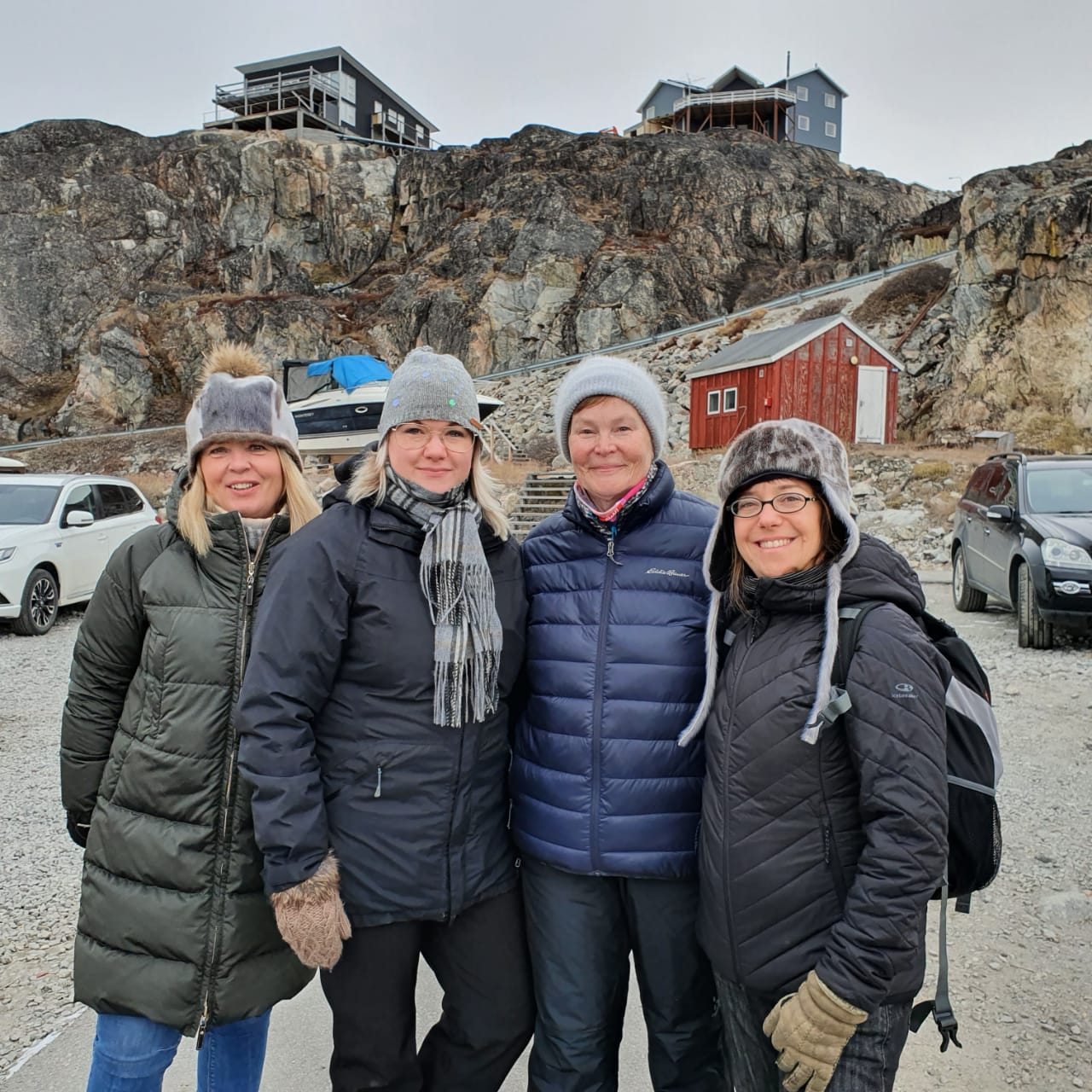 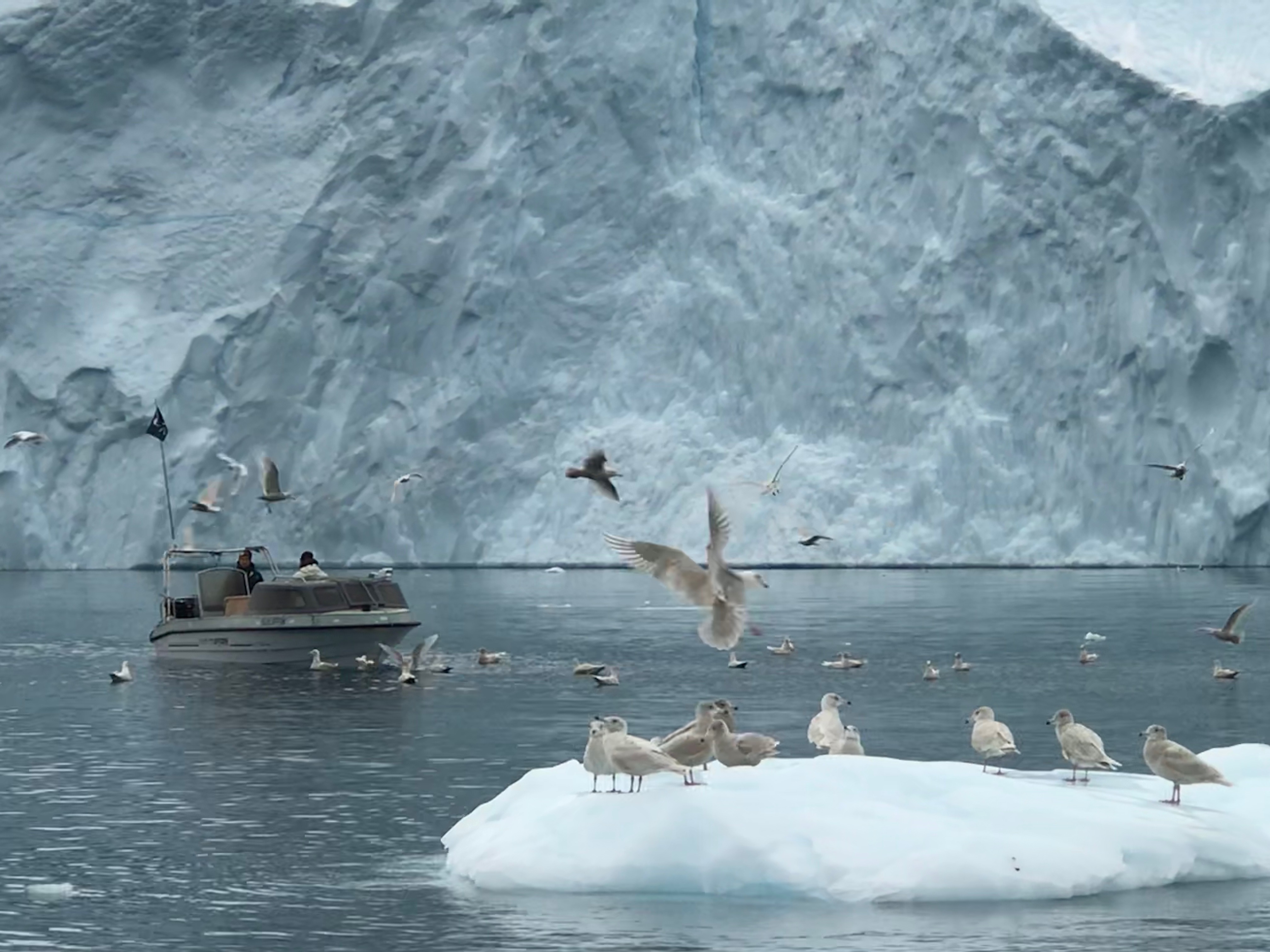 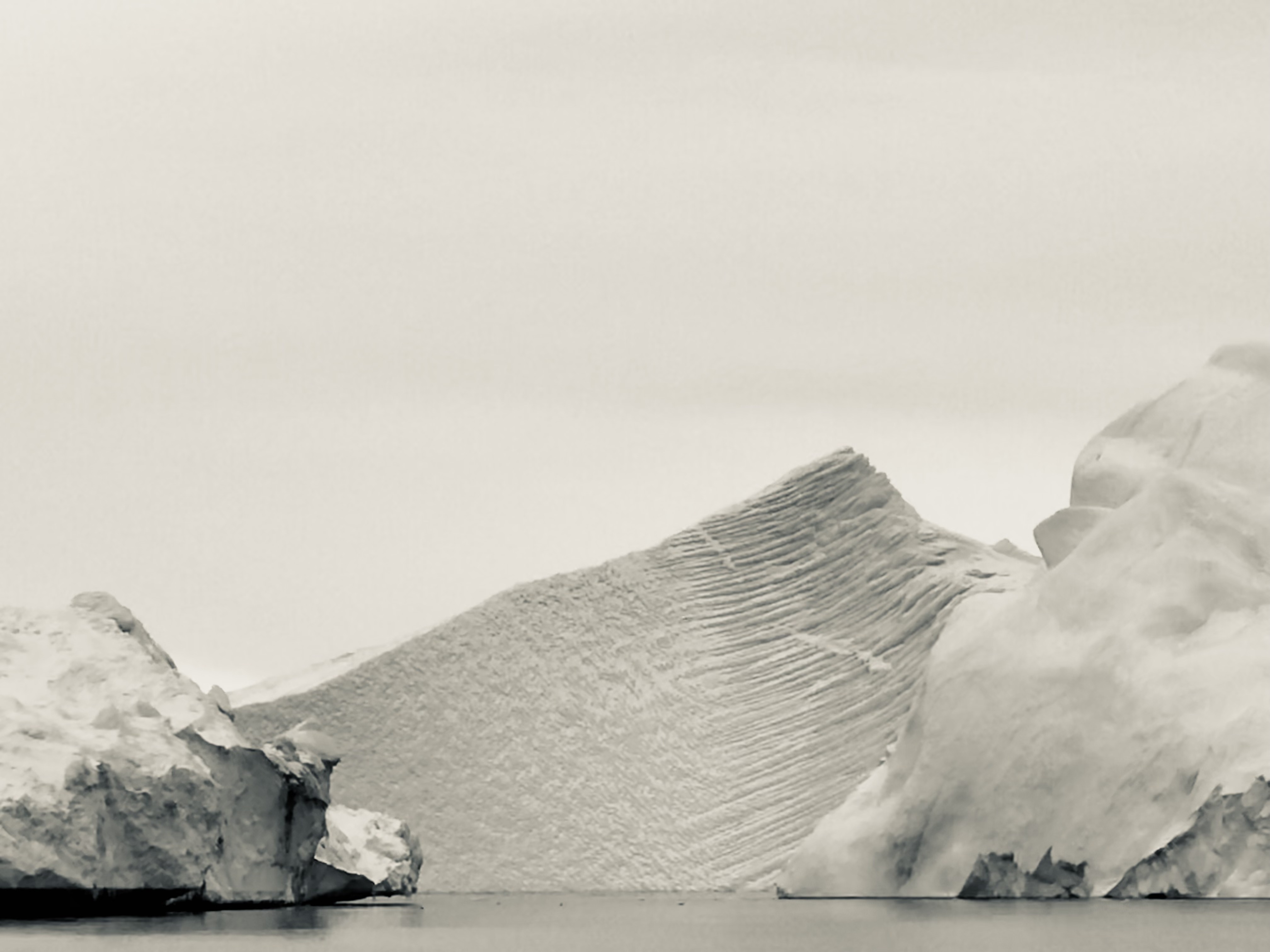 Most of us leave on Monday. Travels occur without incidences, but that would have been too much luck for a group travelling with Thomas. However, this time it is Joan and Jón – who were going to fly out the next day – who get stuck for an additional day due to weather. It wouldn’t be Greenland at this time of the year if they weren’t compensated with a stunning sunset view. 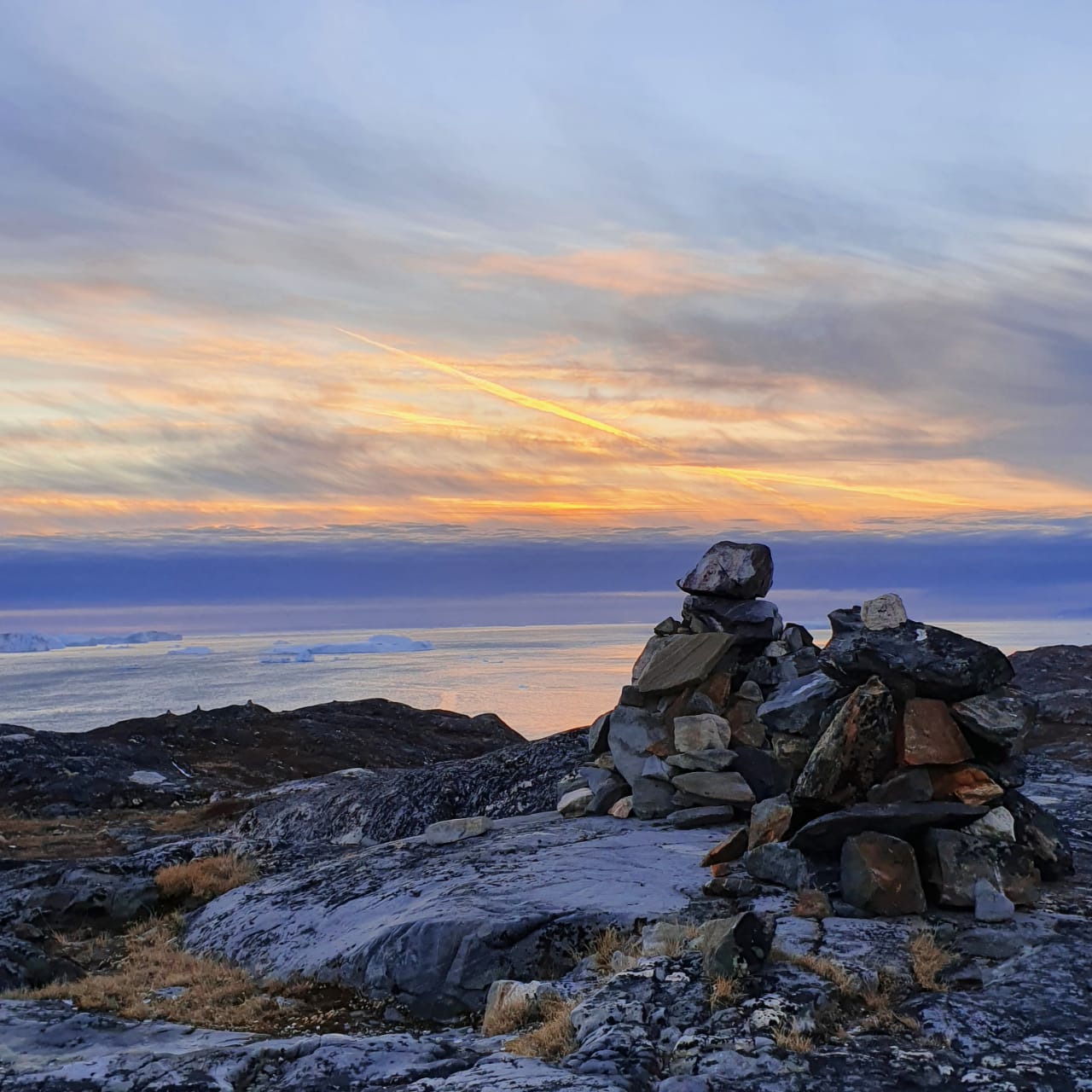 Thanks to Joan, Jón and Thomas for organising and preparing this trip & the whole group for contributing their photos and comments to this blog. And of course, to everyone who shared their stories and expertise with us!