These cartoons add the cool factor to permafrost science

Unless you live on permafrost or study it, you might not know much about it. The Frozen Ground Cartoons project aims to change that.

The project has produced a book of cartoons (available online as well as in print), a board game, and, most recently, an augmented reality app. All are designed to engage both children and adults in learning what permafrost is, how permafrost scientists do their work, and how permafrost regions are being affected by climate change. 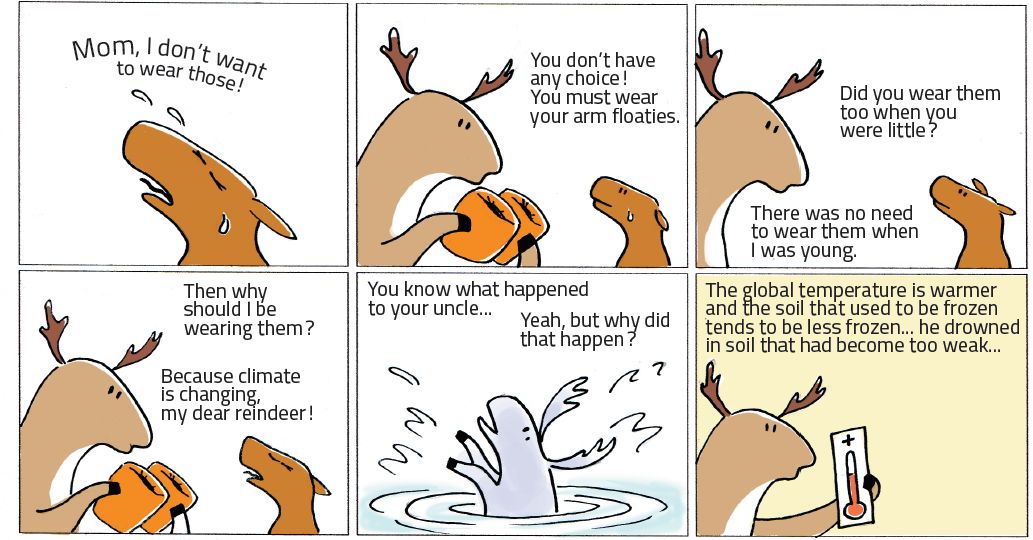 The cartoons came out of a close collaboration between two artists – Heta Nääs of Helsinki, Finland, and Noémie Ross of Montreal, Canada – and a group of permafrost scientists led by Frédéric Bouchard of Geosciences Paris Sud in France and Michael Fritz of the Alfred Wegener Institute Helmholtz Centre for Polar and Marine Research in Potsdam, Germany.

The resulting 25-page cartoon book brings humour to its exploration of topics related to permafrost, including how the thawing of permafrost affects animals or how permafrost scientists do fieldwork in Arctic regions. 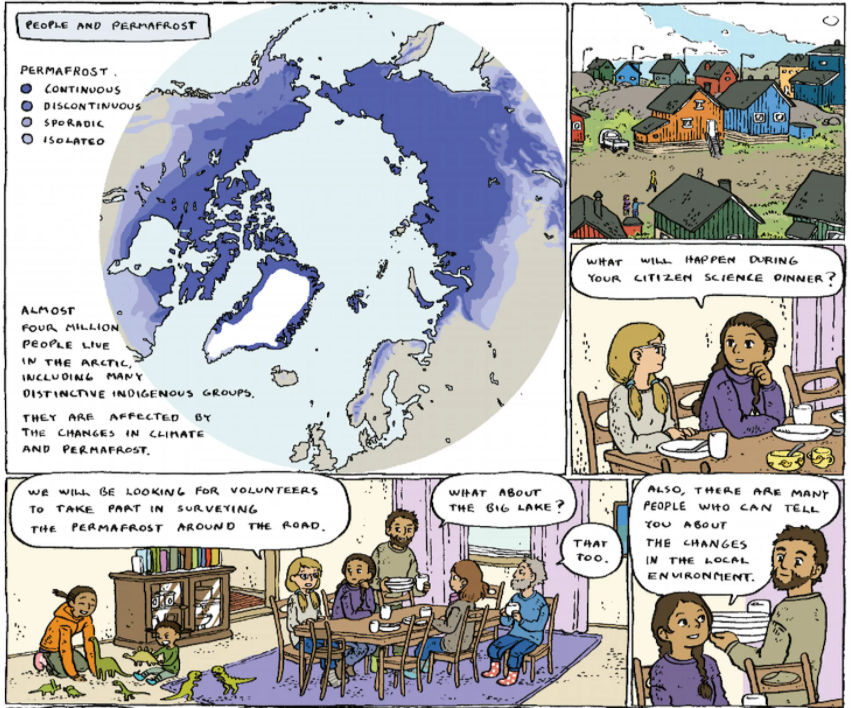 The cartoon book is now available in nine languages: English, French, German, Russian, Swedish, Danish, Luxembourgish, Kalaallisut (Greenlandic), and Inuktitut, one of the main languages of the indigenous Inuit of Canada. The Frozen-Ground Cartoons team has plans to translate it into additional languages spoken by Arctic and northern communities, to ensure that the cartoons are accessible to indigenous peoples and others who live on and near permafrost. The book includes depictions of community members in permafrost areas. 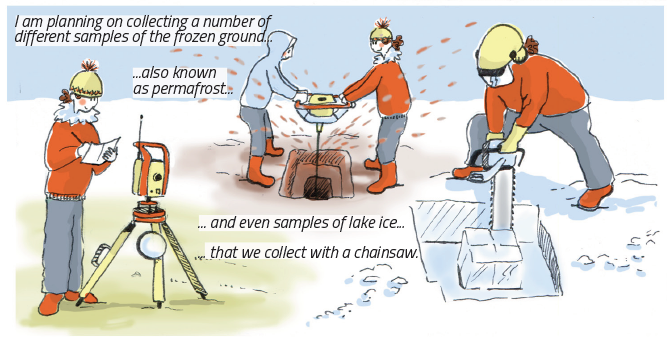 Images from the cartoons were incorporated into a Trivial Pursuit–style board game, in which players try to correctly answer questions about natural science, social science, geopolitics, and economics related to permafrost. Sample question: “Which two greenhouse gases are released when permafrost thaws because of climate change?” The answer: “carbon dioxide (CO2) and methane (CH4)”.

The book and game were then enhanced by augmented reality content, accessible via an app that can be downloaded through Google Play or the Apple Store.

Open the app, point your phone or tablet at the game board or cartoons (even on screen), and you’ll see 3D depictions of animals like reindeer, interactive maps, and videos about permafrost. 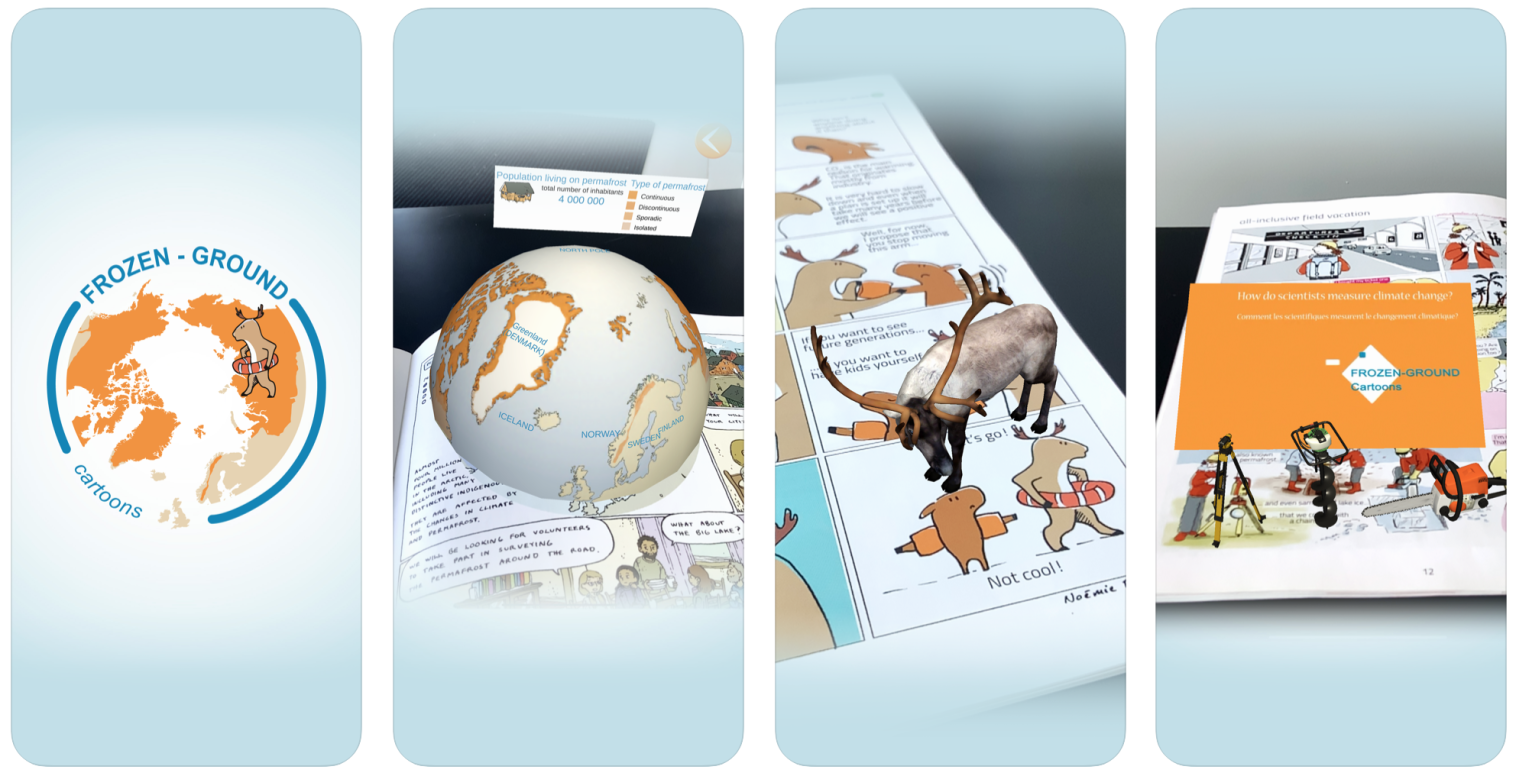 Development of the game and app were led by science communicators including Julie Sansoulet, then with the French National Centre for Scientific Research. Sansoulet, Bouchard, Fritz, and others wrote about the Frozen-Ground Cartoons project in an article published in the journal Polar Record:

“Comic strips or cartoons … can serve as powerful science communication tools: they are visual, generally funny, depict scientific concepts from a different perspective, and can be easily transferred between different language formats and shared via social media. Cartoons effectively connect art and science along visual, narrative and metaphoric axes, and more broadly, they help communicate science to the public and get the reader engaged, an important task of any scientific activity.”

Bouchard and others have shared updates throughout the project via a ResearchGate blog. Last autumn, Frozen-Ground Cartoons materials were tested in high schools in Luxembourg, and there are now plans to incorporate the materials into toolkits to help teachers in the country educate their students about permafrost. Ultimately, the project leaders aim to collaborate with more teachers and share the cartoons and related materials through schools in many countries.

Read here the original article on the Grid Arendal website