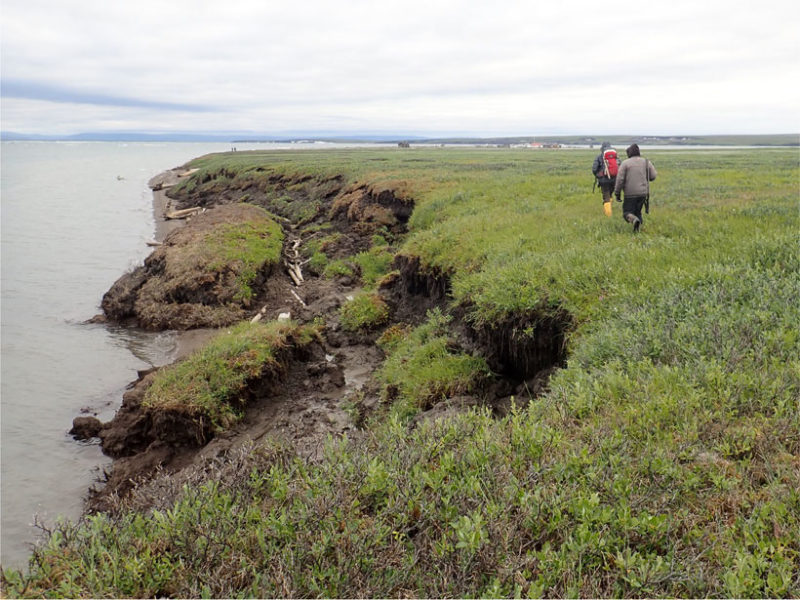 Potentially large amounts of carbon dioxide are being produced by eroding permafrost coastlines in the Arctic, according to a new Nunataryuk paper published in Geophysical Research Letters and highlighted in EOS Research Spotlights.

Climate models and carbon budgets have overlooked this source of greenhouse gas emissions, which could be significant. Permafrost coasts make up approximately 34% of the Earth’s total coastline, and whole sections of coastline collapse, sink or slide into the Arctic Ocean, a process being accelerated by climate change.

To investigate how much carbon is released into the atmosphere as CO2 along eroding Arctic permafrost coasts, a team of researchers simulated erosion in a lab experiment that mimicked the Arctic environment as much as possible. They collected permafrost from Qikiqtaruk (Herschel Island) off the northern coast of the Yukon in northwest Canada, and seawater from offshore. They mixed permafrost and seawater samples and then measured the greenhouse gases emitted over the course of four months, the average length of open-water season in the Arctic.

Roughly extrapolating their findings to the entire Arctic coastline, the researchers estimated that up to 900,000 metric tons of CO2 could be released from eroding permafrost in seawater every year, based on their findings that up to 6% of eroded carbon is vented as CO2 into the atmosphere at 4°C.

“Carbon budgets and climate simulations have so far missed coastal erosion in their equations even though it might be a substantial source of carbon dioxide,” said George Tanski of Vrije Universiteit Amsterdam, lead author of the study. “Our research found that the erosion of permafrost coastlines can lead to the rapid release of significant quantities of CO2, and the erosion can be expected to accelerate as temperatures increase, sea ice diminishes, and stronger storms batter Arctic coasts.”