A last adventure for the road: living in an Inuvialuit hunting camp deep down the wild MacKenzie Delta

It is now fall in the Inuvialuit Settlement Region where we are about to conduct the last of 4 expeditions in the coastal waters of the Mackenzie Delta this year. I travelled from France to take part in this sampling (Bennet from Germany) of the Nunataryuk project to study the implication of the permafrost thaw in the region, especially the fate of the organic carbon that ends up in the rivers, the delta and then the Ocean. We know each other already pretty well. It brings back some good memories of our tandem during the first WP4 Nunataryuk expedition with the helicopter in April (note that WP4 = Work Package 4 = sub-division of the Nunataryuk project that focuses on coastal waters and the use of satellite imagery). Here we go again. We are glad to be back together for a new adventure. This is the kind of feeling when you meet an old friend and nothing has changed. Good field work always gets you closer with your colleagues.

We are waiting for the boat on the docks of Inuvik and we all stare at the horizon, impatient to see Dave McLeod’s boat appearing down the river. A faraway roaring engine sound gets closer. The red boat is coming full speed toward us. David McLeod, Dave’s son, is driving the boat. Thomas Gordon, our research assistant, jumps out of the boat onto the dock like a cat and quickly attaches the boat. Here we are, facing each other. After some warm handshakes, we load the boat with the scientific gear, and then take a group picture with our chief scientist, Martine Lizotte. She grabs my hand to tell me goodbye and whispers in my ear: “be safe”. “Safety first” as always. Now we’re on our own. Thomas Gordon swears to Martine he will look after the boys (us). Let’s hit the Delta, I can’t wait anymore. 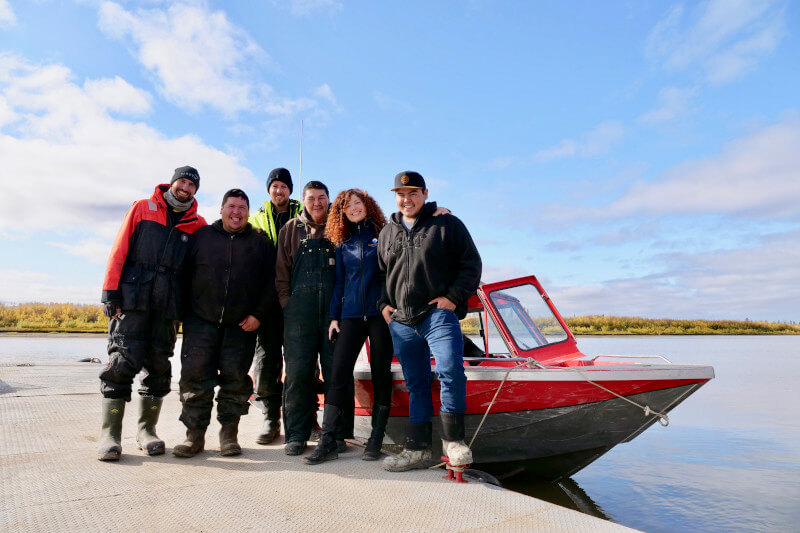 The first stop on our journey is Aklavik. A town located 3 hours away from Inuvik along the meandering rivers of the Delta. The only way to get there is by the river. Either on a boat in summer, or driving on the ice road in winter. Of course, there is a little airport but the connections remain rare. Aklavik is a typical northern hamlet with a lot of snowmobiles, boats and dogs hanging here and there. Dave and Jordan McLeod show up with the second boat meant for transportation of gear, water samples and safety. A third boat with Jordan and Dave’s kids also joins us for a late caribou hunt. We are good to travel farther North into the Delta. 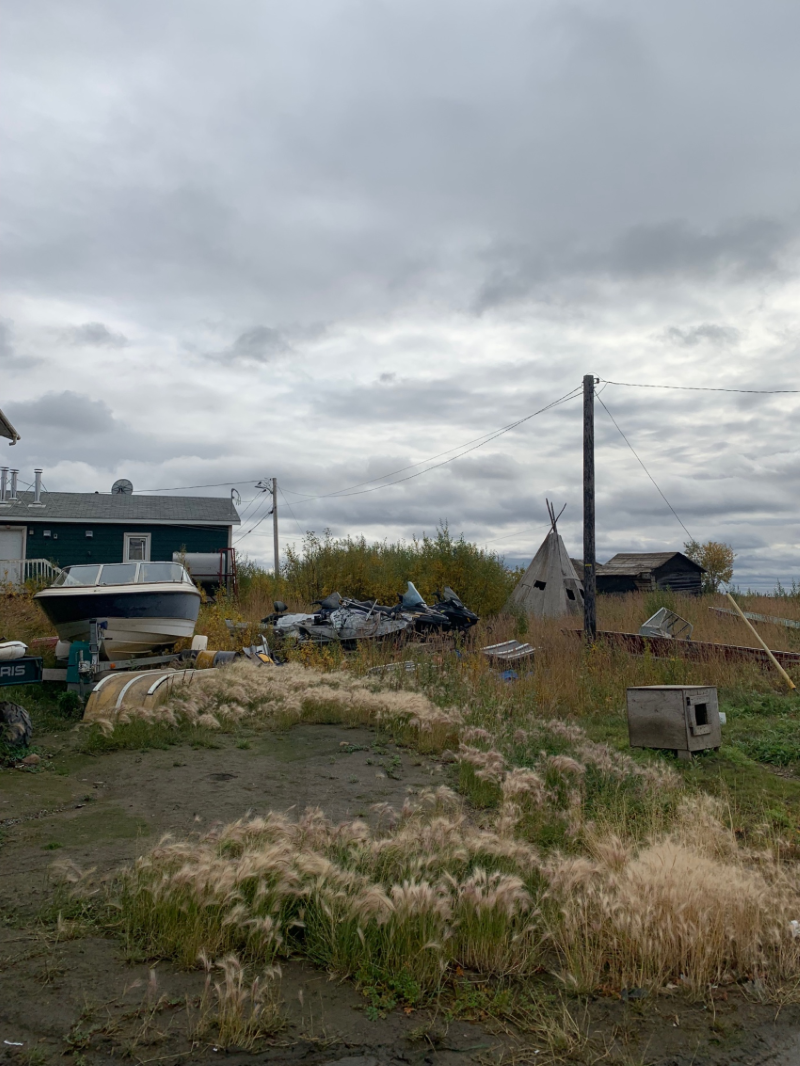 We slalom along the channels. The autumnal yellowish colors are gorgeous against the backdrop of the Richardson Mountains. Bennet and I can’t stop admiring the landscape. After a couple hours, we exit the channels and enter the oceanic part of the Delta. Waves get bigger and so does the swell. But it is a good day in the Delta, says Thomas. 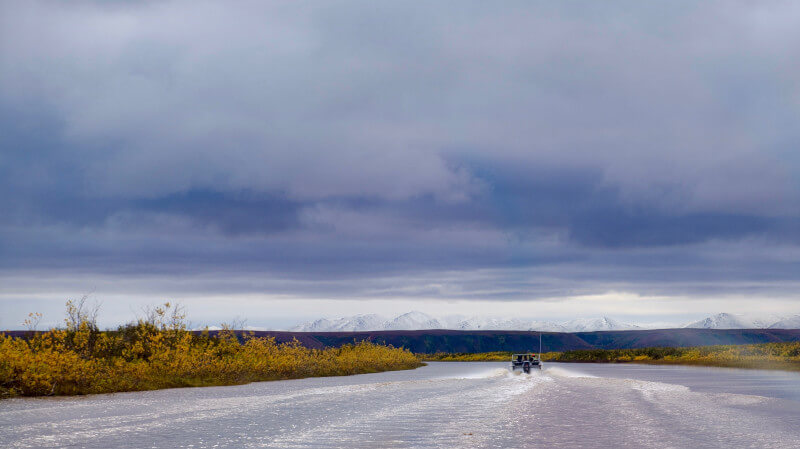 The arrival at Shingle Point is breathtaking. There, a gravel beach separates the ocean from a calm bay where a dozen hunting cabins stand in line. It is perfectly positioned in front of the hills on the mainland where the caribous are. A feeling of being at the end of the World. Fishing nets here, a fish dryer there, an old tipi made of dry wood is collapsing. It’s so silent. Just the noise of waves hitting the other shore. Thomas yell at me: “I am going to take care of you guys! I am going to make your lives easy!” while he rushes toward our cabin to start up our stove. We were in good hands, we were ready to work. 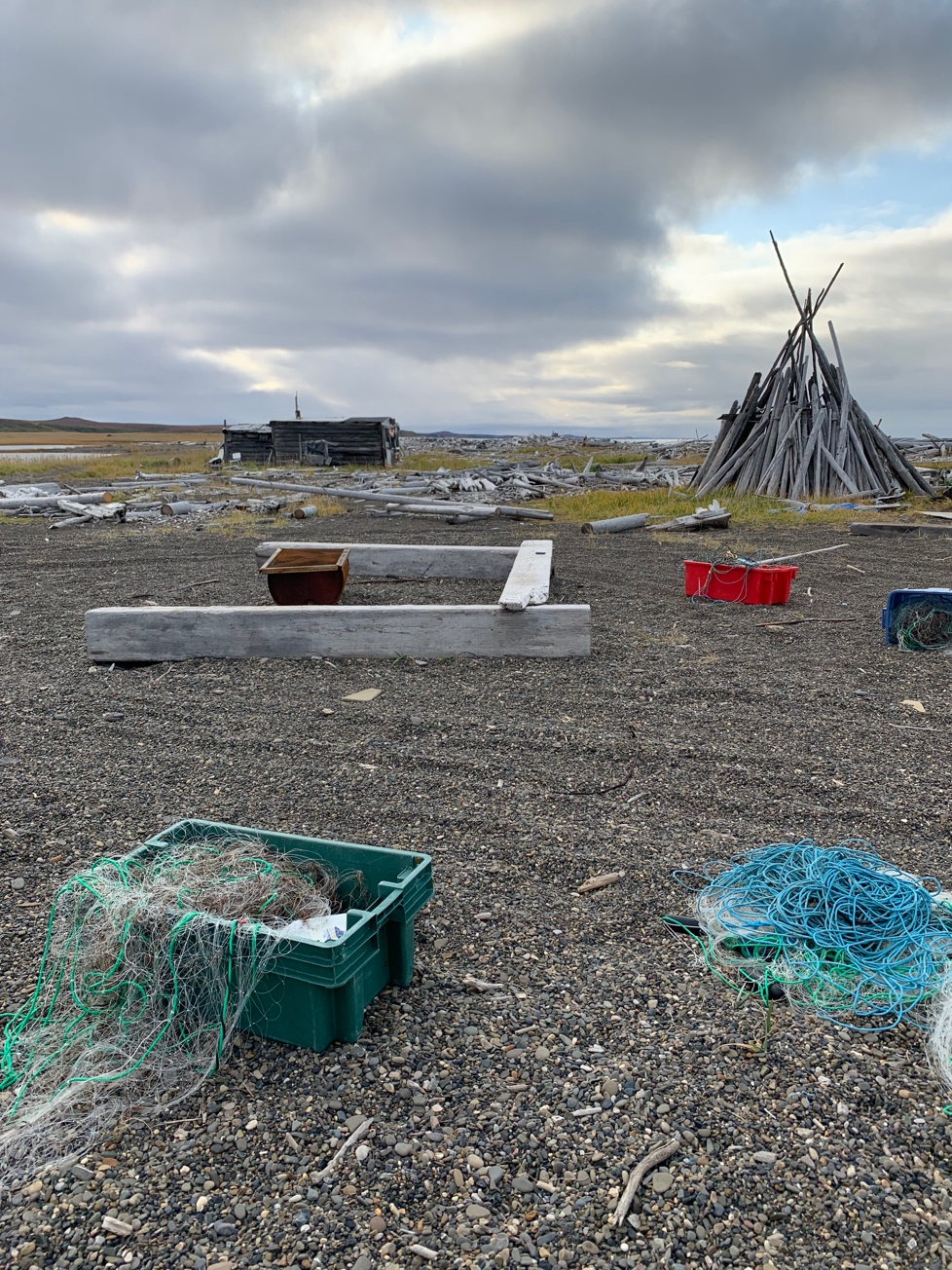 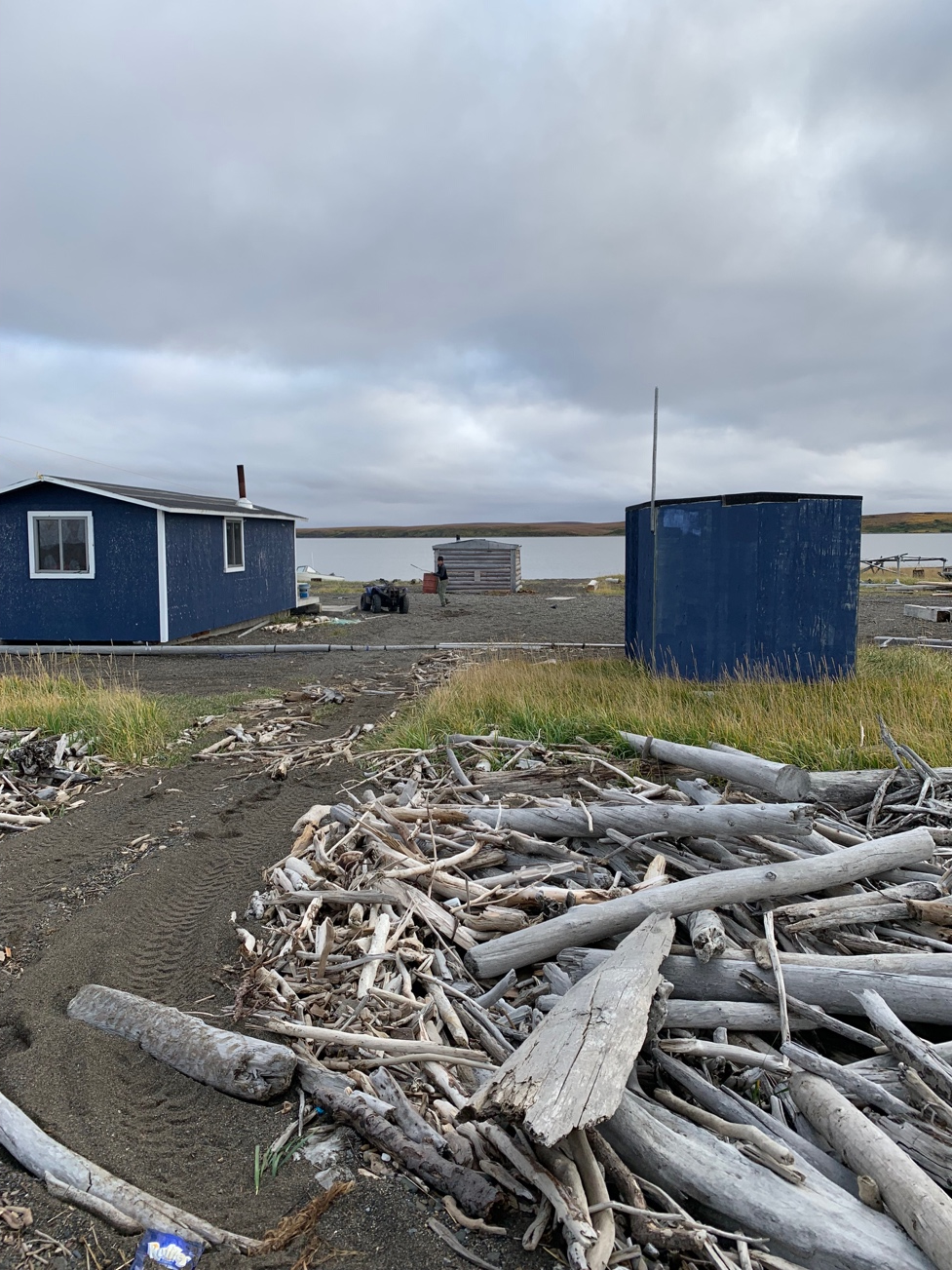 We know we would be busy in the evening as we had to prepare all the scientific sampling instruments to be ready for the next day at dawn. We had to install the frame, the winch, the optical frame, etc … In the meantime, the kids fuel the 4-wheelers, load rifles and adjust their scopes. They are going on a caribou hunt at twilight. Bennet and I are exhausted. After a first test station around the creek, we crash in our beds while the dry wood quickly burns in the stove. 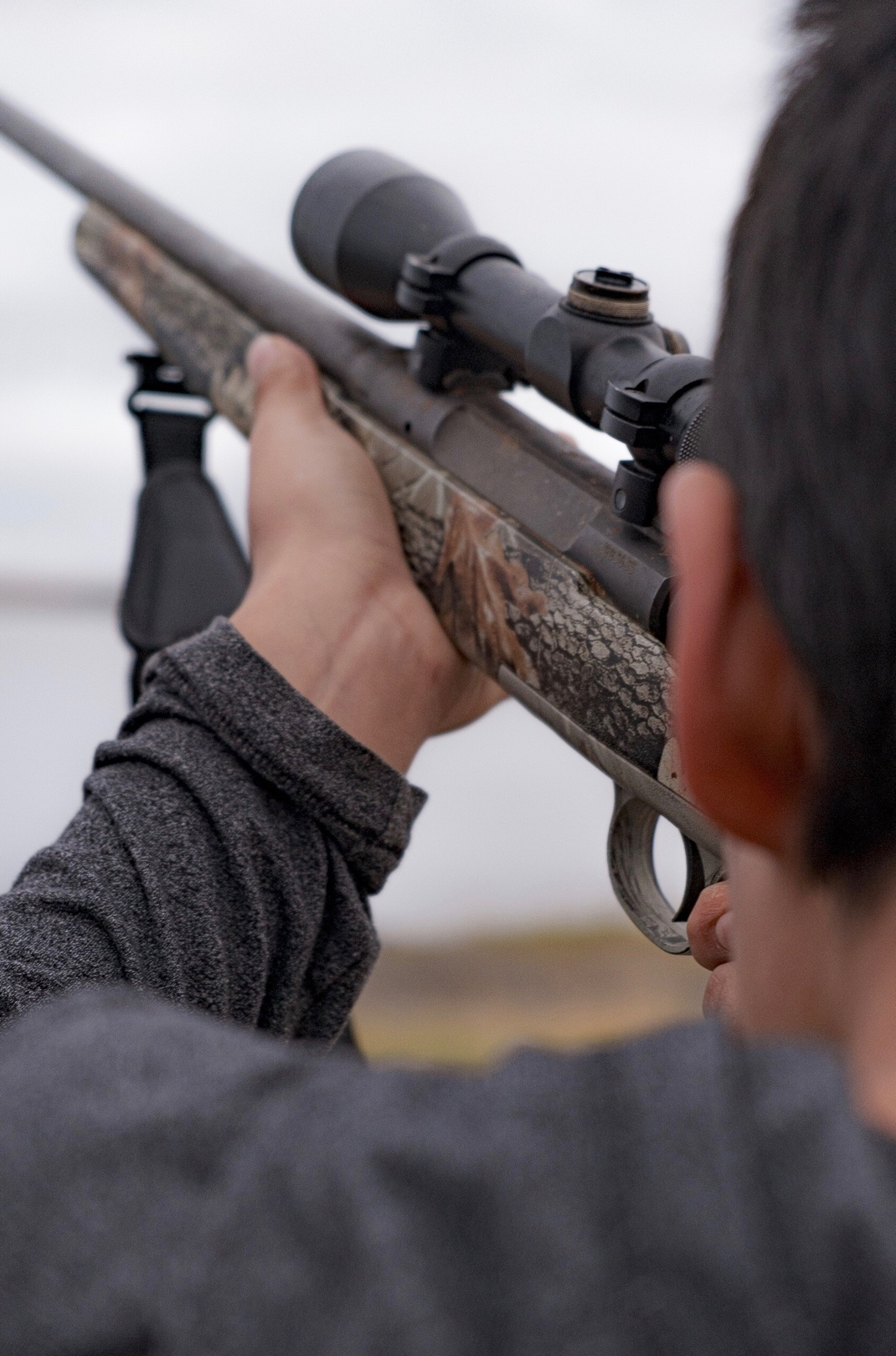 The next day, we wake up at dawn as expected. The sky is clear and full of the promise of a beautiful day. Thomas shows up in the cabin and we drink some coffee together. Jordan then calls us from his cabin because eggs and bacon are ready. One hour later, Dave, Thomas, Bennet and I jump on the boat and speed off toward the Delta. Jordan and David follow us on a second boat. The sea at that moment is perfectly smooth like oil. Nobody talks as we contemplate Shingle Point fading away in the distance, illuminated by the reddish color of the rising sun. The contemplation does not last long as the first station location is reached quickly. We first sample about a couple miles away from Shingle in the Delta. All runs smoothly. We adjust our workflow. It requires a very good synchronization as 4 big boys have to navigate the limited room available on Dave’s 21-Ft long boat. We shout out loud every single action we intend to do so that the others can adapt. The day was perfect until lunch. I was so hungry I ate two sandwiches while we were transiting to a remote station far out in the Delta. Fatal error. The swell rocked the boat, I slowly lied down on the bench with an unavoidable need to sleep. I could see Thomas and Bennet watching me carefully while I was losing more and more reactivity and slowly but surely turning white. Well, seemed official at that point, I was sea sick. I did not have the time to recover before the next station. It just became worse and worse. I could not stare at the horizon since I was the ‘computer guy’. Every single move was a struggle, extremely slow and painful. I burnt out all my energy. But my pride did not allow me to give up. I wanted to complete my duty, no matter what. Finally, after feeding the fish, my condition improved. After 8-hours at sea and 8 stations sampled, we decided the day was over and headed back to Shingle.

At out arrival, kids were already back from a successful hunt. No less than 12 caribous were tied up on the 4-wheelers. Kids were proudly posing next to their catch while Jordan hurried up to take the hearts out, and sliced and tossed them into a frying pan for dinner. After a few baseball games with the kids, and the preparation for the next sampling day, Bennet and I, once again crashed in our beds, in some kind of very deep sleep, looking forward for the next adventure.