After 2 hours driving from the boreal forest to the arctic tundra, Lauren Kipp (Dalhousie University) and Gwénaëlle Chaillou (Université du Québec à Rimouski) discovered the pretty and colored Inuvialuit hamlet located at the northern terminus of the Inuvik–Tuktoyaktuk Highway 10. They joined Dustin Whalen’s team (Natural Resources Canada) and international collaborators for two amazing weeks of intensive sampling. The objective of the expedition? Tracking (ground)water from coastal permafrost and massive ground ice thawing and discharging in the nearshore ocean. 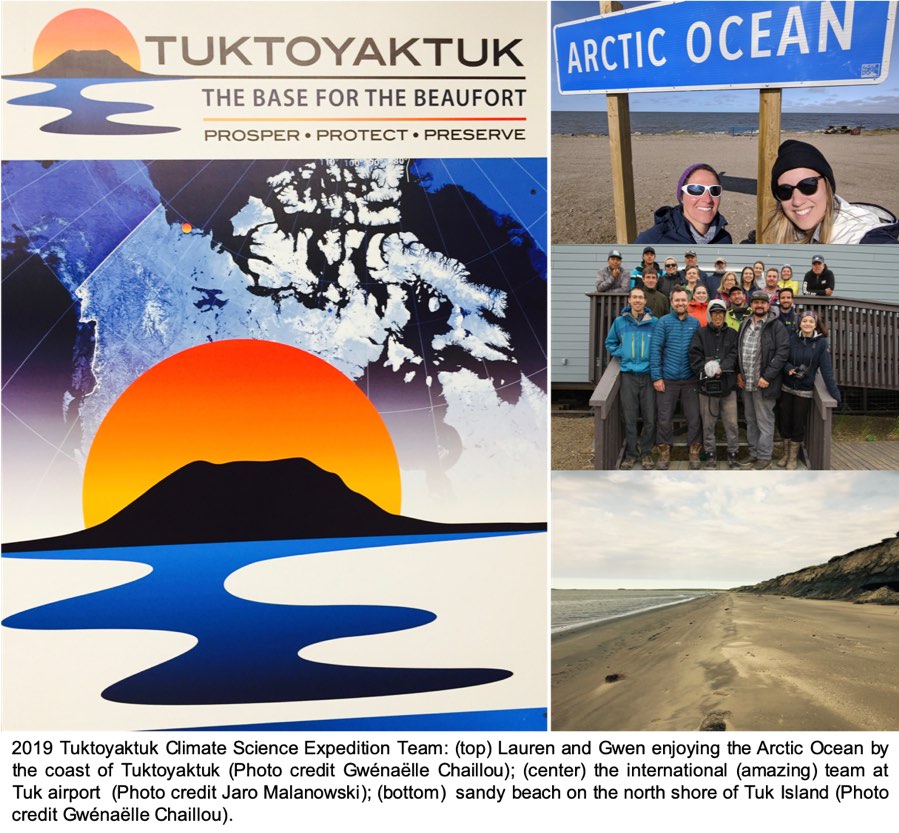 A multi-proxy approach was used to track groundwater in the seawater. Measurements of radon and radium isotopes, along with the stable isotopes of water and dissolved organic and inorganic carbon, were used to localize and estimate these diffuse seepages along the shore. It was a challenge … because there are only a few studies that report radon and radium activities in groundwater in the Arctic, and far from the Mackenzie delta region.

The first days of the expedition were dedicated to the laboratory installation in the Learning Center of Tuk, the training of field assistants, and testing the use of drive-point piezometers to collect beach groundwater (porewater). In the north shore of Tuktoyaktuk Island, nearshore seawater, beach groundwater in the intertidal zone, and melting water from massive ice were collected. Radon-222 and radium isotopes were measured in the lab overnight and samples were prepared to measure organic and inorganic carbon, nutrients and trace metals.

On July 31st, all the team was at the airport at 9 am, ready for an awesome day in Peninsula Point where the landscape directly slumps into the ocean. Here coastal erosion is just everywhere. The permafrost is thawing fast and is turning to mud… the nearshore ocean looks like chocolate milk ! But, beluga whales are still there, just in the front of the beach, playing in muddy waves. 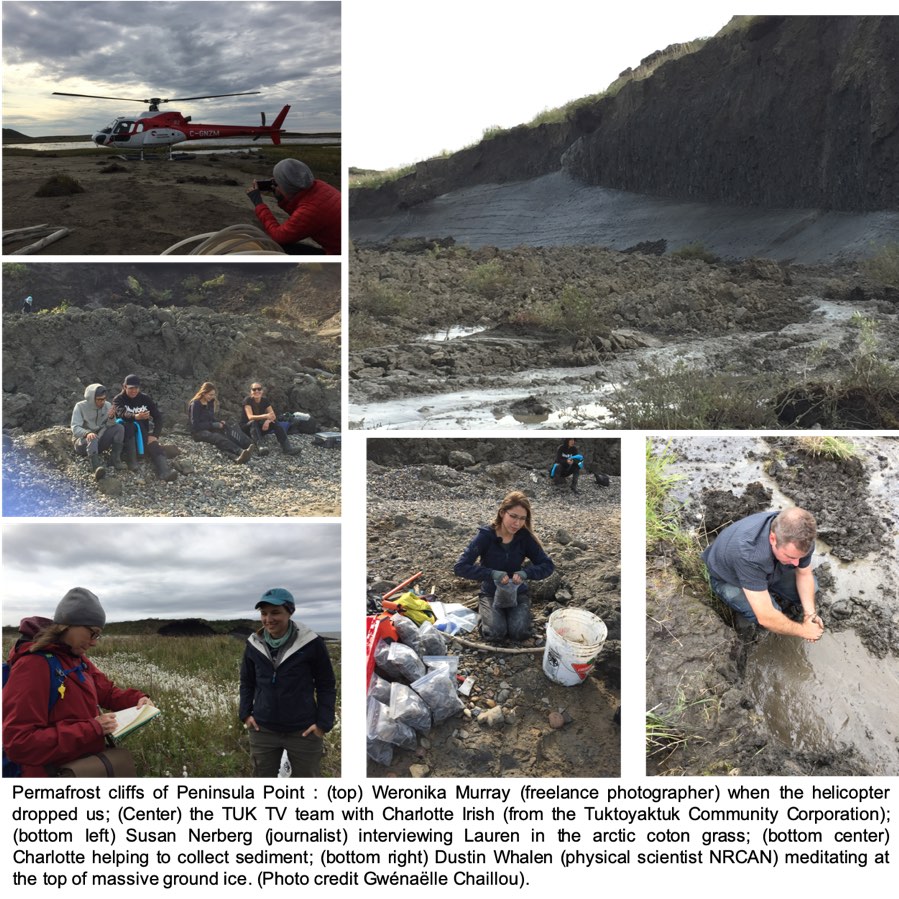 The day after, Lauren, Dustin and Gwenaëlle were on Charles’s boat to sample seawater in the front of the slump. No beluga whales were observed this day but, from the sea, the team had a beautiful scenic view on the land of the pingos.

At the end of the expedition, more than 30 samples were collected in three sites in Tuktoyaktuk region: Tuktoyaktuk Island, Peninsula Point and Crumbling Point. Several samples of groundwater and melting water revealed high activities of radon and short-lived radium isotopes suggesting that these geochemical tracers could be used to track and estimate fluxes of (ground)water derived from the thawing of coastal permafrost. 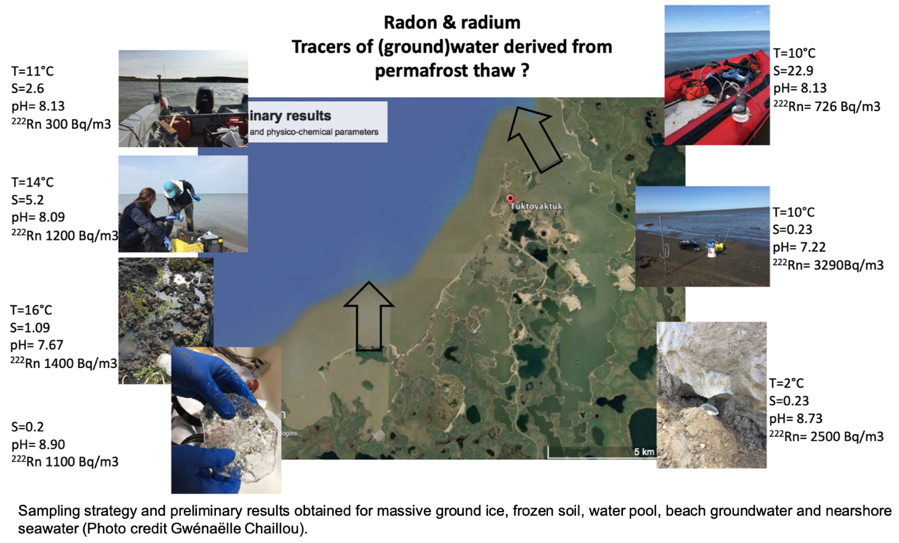 The evaluation of the quality of (ground)water derived from coastal permafrost thaw is important for managing coastal resources but it is also crucial for planning the future use of freshwater resources for coastal arctic communities. William, one of the climate change monitors of the Tuktoyaktuk Community Corporation, explained that they commonly use melting water from massive ice to prepare tea and soups… Access to safe and reliable drinking water is a challenge in a changing Arctic. 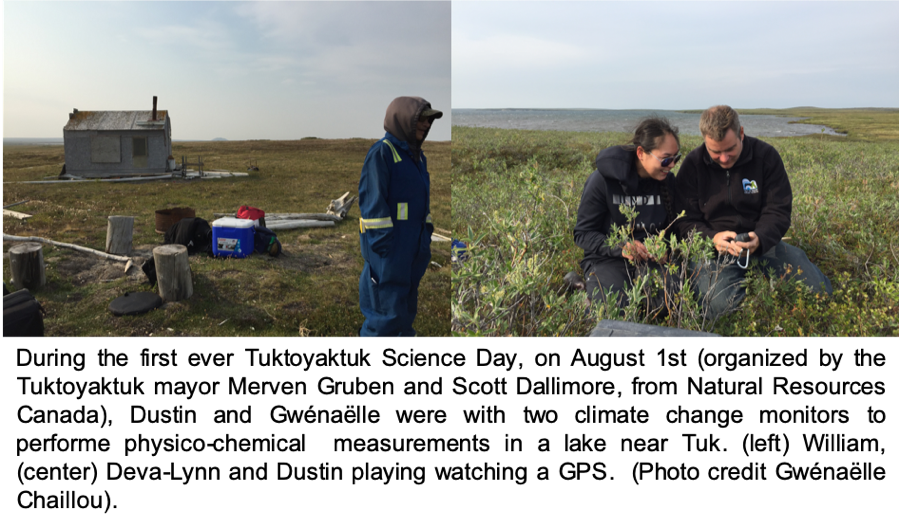