Nunataryuk-WP4- Microbes in the Canadian Arctic

I am a microbiologist studying the degradation of terrestrial dissolved organic matter (tDOM) by microorganisms in marine and freshwater aquatic environments. I am doing my PhD in a small town in southern France located in the foothills of the Pyrenees on one side and the Mediterranean Sea on the other, Banyuls-sur-Mer, within the Laboratoire d'Océanographie Microbienne (LOMIC). As part of my thesis project, I had the opportunity to integrate the Nunataryuk project, whose objective is to study the origin, transport and fate of organic matter transported by the Mackenzie River to the Beaufort Sea. This organic matter, mainly of terrigenous origin, comes in part from the thawing of permafrost caused by global warming, which is particularly intense in the Arctic. So, there I was leaving France, heading for Quebec City, for 3 months in Canada from June to September 2019. This was the first time for me on the other side of the Atlantic Ocean and I looked forward to discover a new continent, a new culture and all of this by participating in a new scientific project for my PhD. This trip would definitely represent many "First times" for me. 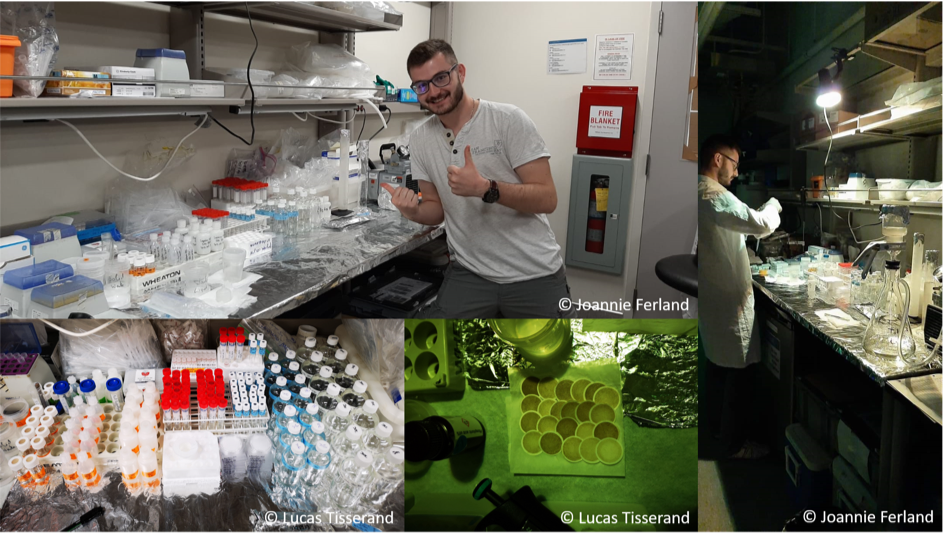 As soon as I arrived in Quebec City, I just had time to get to know some of the members of the TAKUVIK team at Laval University, some of whom were also involved in field expeditions, and it was already time to leave for my first field mission in Canada. This time, heading to the Canadian Arctic, in Inuvik, Northwest Territories. It’s there that we were based for all four expeditions of the Working Package 4 of the Nunataryuk project.
I took part in two of these four field expeditions, as a member of the Lab Team (LT) working in the laboratory at the Aurora Research Institute (ARI) in Inuvik. After the preparation of the laboratory at the beginning of the expedition, we were ready to receive the first water samples. Following each day of sampling, the Field Team (FT) would bring back several tens of liters of water taken from the Western and Eastern Sectors of the Mackenzie Delta. Then, we processed them at “night”, accompanied by the persistent daylight in Inuvik at that time of the year (July-August). Our work consisted in taking samples for different physical, chemical and biological parameters. This meant filtering… filtering… and more filtering, but also filling a very large number of vials (Figure 1). We worked with the white lights off and only a few small green lights illuminated us in the dark. The role of these green lights was to protect the integrity of some light-sensitive samples. For two weeks, we filtered several hundred liters of water thanks to the efficiency of the FT in sampling the water directly in the field.

After the end of each sampling period, time was spent inventorying, cleaning, and storing the equipment so that everything would be ready and functional for the next expedition. After a few weeks in this place, where it is easy to lose sense of time through the busy schedules and the lengthy daylight hours, it was finally time to go. After two weeks of intense work, fatigue was felt and that’s why we each planned to enjoy a little well-deserved rest upon our return to Quebec City or any other destination depending on the different participants. But my story had a different twist to it.

Remember, I’m a microbiologist and I’m looking to study the degradation of terrigenous dissolved organic matter (tDOM) by microbial communities. That is why, after each field expedition, I performed biodegradation experiments in Quebec City. The objective of these experiments was to investigate the degradation of different types of dissolved organic matter by microorganisms in water samples sampled along a salinity gradient from the Mackenzie River to the Beaufort Sea. These experiments will allow me to study the fate of tDOM through microbial degradation in the Mackenzie Delta and to study more precisely the carbon cycle in these aquatic systems subject to high terrigenous inputs. Is this tDOM degraded? How is it degraded? In what quantity? By which microorganisms? These are some questions I will try to answer. Finally, this experiment will also allow me to verify if the refractory tDOM is more significantly degraded in the presence of so-called labile organic matter, this is called the "priming effect".
So, no time for me to rest once back in Quebec City because I had to prepare everything so that the experiment could be launched as quickly as possible in order to limit the changes that could occur in my water samples between the time they were sampled and the start of the experiment.

Actually, I tested 4 different conditions for each water sample. The first was a control condition, i.e. no changes were made to the water samples. For the second, I added DOM produced by Arctic microalgae (Figure 2a). For the third condition, I added DOM extracted from permafrost samples (extraction performed by Colin Stedmon, DTU AQUA National Institute of Aquatic Resources). Finally, for the last condition, I added organic matter from both Arctic microalgae and permafrost to my water samples. The samples were incubated for 3 weeks at 10°C in the dark (Figure 2b) to monitor the degradation of this DOM by microorganisms. Then, I took sub-samples in regular time steps to measure different parameters such as dissolved organic carbon (DOC), total organic carbon (TOC), colored dissolved organic matter (CDOM), nutrients, bacterial abundance, enzymatic activities, microbial respiration, DOM composition, microbial diversity… 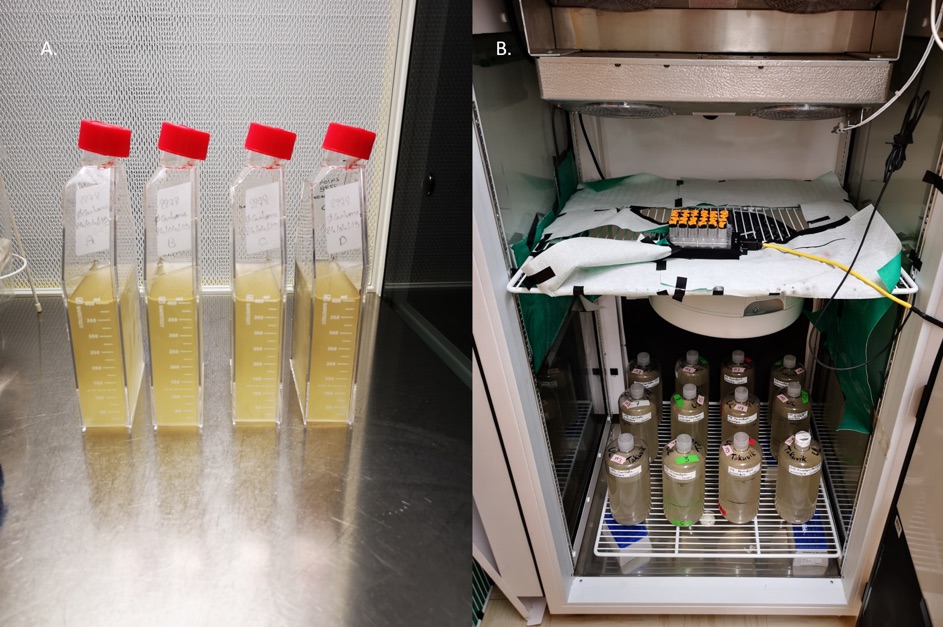 To go into a little more detail about this experiment, microorganisms use DOM to cover their energetic needs, which are necessary for their growth. However, depending on the composition of this DOM, it’s more or less “easy” for these microbes to assimilate it. The DOM produced by phytoplankton and the one released during the thawing of permafrost differ in their composition. This has a major impact on the bioavailability of the DOM and microbial DOM degradation. The organic matter produced by microalgae (or phytoplankton) is mostly composed of simple molecules such as polysaccharides, that are easily assimilated by bacteria, called labile organic matter. On the other hand, DOM from permafrost and more generally tDOM, is composed of more complex molecules such as lignin (which comes from terrestrial plants), which are less easily biodegradable by microorganisms, called refractory organic matter.