The trail was often a knee-deep muddy track between hummocks. Despite our packing as light as possible, it took us multiple trips to get everything portaged (lower photo). In addition to the boats and the usual camping gear, our scientific equipment included filtration devices, a solar panel, battery and small freezer. Because of the portage, not many people paddle the upper Peel River. 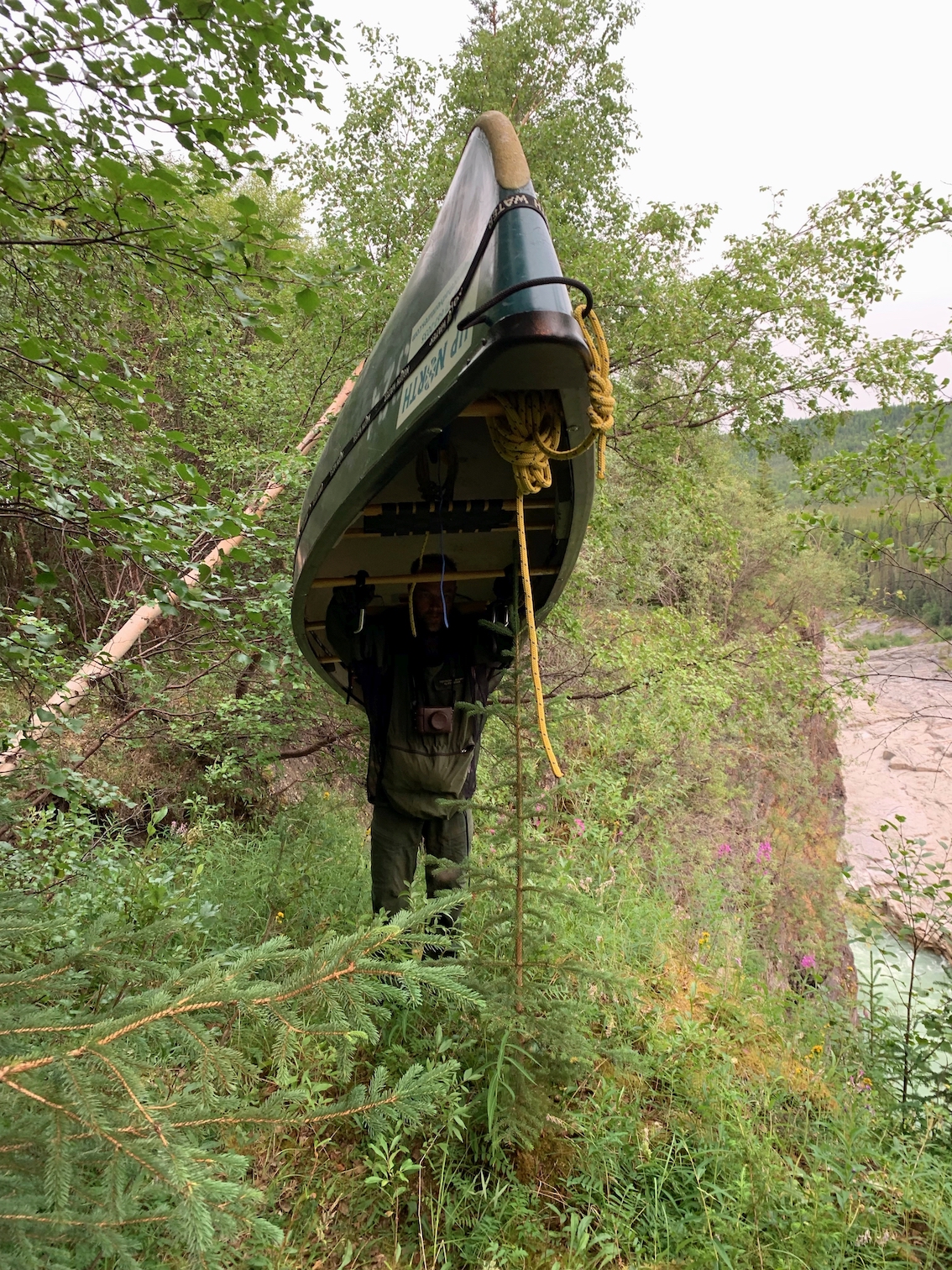 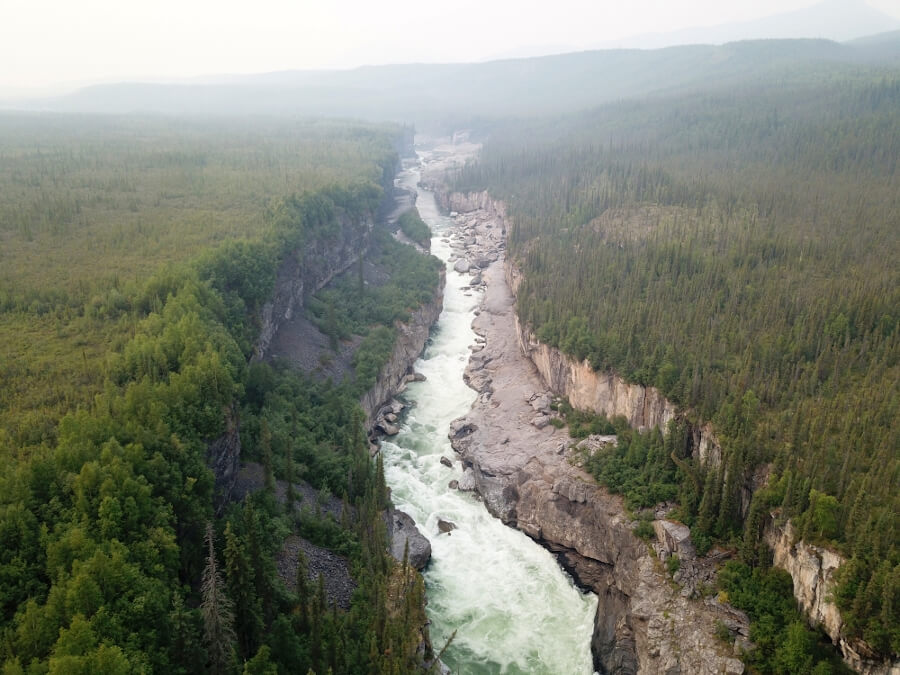 Meanwhile, the truck crew moved southward through the Richardson Mountains, across Eagle Plain and through the Ogilvie Mountains, sampling upland streams and rivers as they went. Repeated sampling of these sites should show us changes over time. These samples also needed to be subdivided and treated for multiple measurements, an activity that usually took until midnight. They also needed to shop, sort and pack supplies for the upcoming final leg on the lower Peel River. There were rewards for this work, such as encountering the Porcupine Caribou Herd at the Yukon-NWT border. 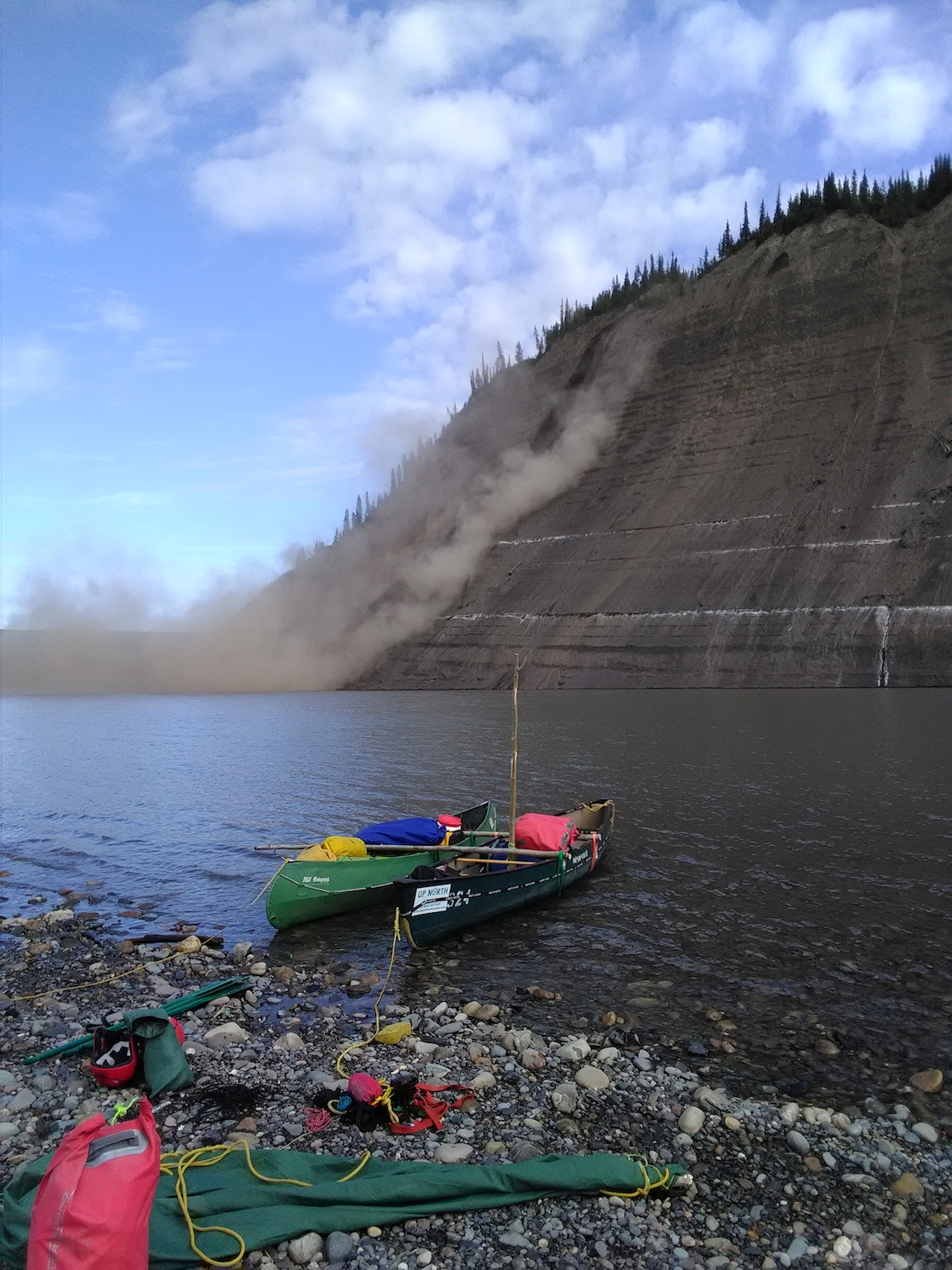 At the lower end of the Peel River, in Fort McPherson, sampling was also taking place for us at weekly intervals. A resident of Fort McPherson filled five litre wine bags with river water for us when he went out to fish. We had help organizing this activity from Emma Hodgson (Simon Fraser University) and Rachel Hovel (University of Maine-Farmington), who study fish on the Peel and Mackenzie Rivers. The truck crew met with Rachel and her colleagues to discuss the sampling. In the meantime, our boat crew collected water samples upstream for Rachel and her group. They measure at the concentration of a strontium isotope in the ear bones of the whitefish, to see where they spend time over their life cycles – it’s a bit like looking at tree rings to find out about the history of a tree, only with fish. Our samples will hopefully help to find out where the whitefish in the Peel spawn and grow.

On July 23rd, the boat crew got word that the Doll Creek forest fire was only 5 km from the Peel River. Ash settled on the tents at night, and a towering column of smoke could be seen to the northeast. In four days of further travel and sampling, the team passed through Peel Canyon and reached Taco Bar on July 26th. “Bar” in this case refers only to a gravel bar of the river where float planes can land, but we met two other groups there and did share some company and drinks. On the next day, a Cessna came from Mayo to take Bobbi Rose, Jody and Niek, together with all of the samples, back to civilization, and to bring Frederieke with fresh supplies to the boat crew. The boat crew spent the day packing up the rafts for return to Whitehorse and refitting the canoes. From here on, the Peel River became larger and slower - we planned to continue with two canoes lashed together to make a catamaran which would be more stable in high winds. On July 28th, the remaining four participants set out on the lower Peel River, while Bill Cable (AWI) arrived in Whitehorse to join the truck for the final phase of the expedition – the boat crew will need to paddle about 35 km per day to reach Fort McPherson in time for the rendezvous with Bill.